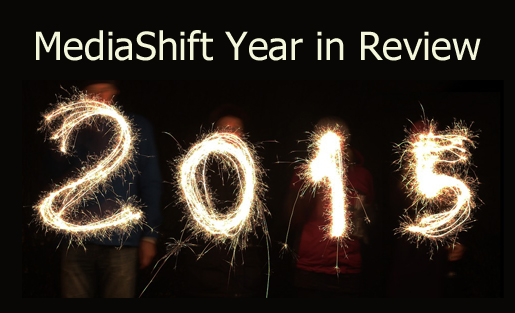 Every year at MediaShift, we take the last two weeks of the year to hear from experts in the media business about what 2015 brought to the industry and what 2016 promises.

Below, you’ll find this year’s collection of roundups, analysis and predictions. Happy new year from all of us. Here’s to another exciting year in the shifting of media.

"Here's to another exciting year in the shifting of media."

The Race for Speed and Mobility: The Year in Analytics and What to Expect in 2016, by Alexandra Kanik

7 Developments in Self Publishing in 2015 That Will Help Writers Focus on Writing, by Carla King

The Year in Reading: Print Books, Magazines, Newsletters Hold Their Own In 2015, by Jenny Shank

Remix: 11 Ways You Can Innovate in Your Courses in 2016, by Meagan Doll

10 Predictions for Media Metrics in 2016, by Tim Cigelski

Syria, France Top List as Most Deadly Countries for Press in 2015, by Sonia Paul

#EdShift Chat: 2015 Year in Review, Moderated and Storified by Stacy Forster
Why 2016 Should Be the Year of Engaged Ethics, by Kathleen Culver
Predictions for 2015: Content Shakeout, More Tracking, Measurement Muddle, by Dorian Benkoil

How Social Media Drove News Traffic in 2015, by Allie VanNess, Parse.ly
Predictions for Surviving and Thriving in the Media Business in 2016, by Paul Berry, RebelMouse

Other coverage from across the web

Courtney Lowery Cowgill is a writer, editor, teacher and farmer. As an editor, she works as the managing editor of PBS MediaShift. As a teacher, she’s an adjunct professor at the University of Montana School of Journalism, specializing in teaching feature writing, legislative reporting, rural journalism and online journalism. Formerly, she was the editor in chief of the now shuttered online magazine NewWest.Net, which she co-founded.