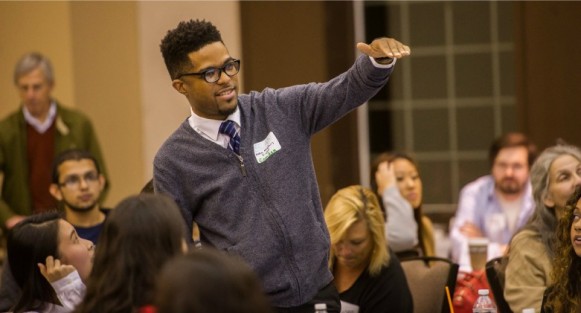 That idea is at the heart of News Voices: New Jersey, Free Press’ community-engagement project. Last night in New Brunswick, more than 120 people demonstrated what’s possible when neighbors, church leaders, students, educators and journalists sit together at the same table.

"Everyone in attendance was committed to finding ways to support local journalism."

Journalism can: bring community together, hold power accountable and enable everyone to participate. #newsvoices pic.twitter.com/KE5Ct6iDkO

Packed into Trayes Hall at Rutgers University, the diverse group of participants spoke to one another for three hours about the role residents can play in strengthening local journalism and highlighting the issues that impact their neighborhoods. By the end of the evening, all of the journalists in the room had story leads they planned to pursue. Over the next few months, Free Press will help journalists and community members take concrete steps to tell the untold stories of New Brunswick together.

From the start, News Voices: New Jersey has been a community-driven project. That’s why Wednesday’s forum was bilingual and featured voices from the New Brunswick community. After a few Free Press staff members spoke about the project, a collection of local residents and journalists discussed how communities and reporters can work together.

A volunteer at the Reformed Church of Highland Park talked about how journalists can put a human face on refugees coming into the community. A member of the group New Labor spoke about the need for the media to investigate how employers fail to pay undocumented workers for their hard work. And journalists from New Brunswick Today and NJ Advance Media talked about the role community members have played in providing news tips and local expertise.

Questions for a Community

Then it was everyone else’s turn to speak. Attendees moved into small-group discussions to discuss what issues are important to them. A broad range of topics came up: fair labor practices, economic development and housing, educational opportunity, and local government transparency. After exploring how New Brunswick residents get information about these issues, participants dove into a single theme that had emerged: income inequality.

They grappled with these questions: What is the untold story when it comes to income inequality in New Brunswick? What are the unspoken truths?

The responses were rich and varied: People talked about everything from public housing to tuition costs to polluted neighborhoods to human trafficking. As residents reported back, journalists scribbled down the ideas, with one saying to the group “I have two new stories I heard that I’m going to assign tomorrow.”

Then attendees brainstormed about how community members and journalists can collaborate to tell those stories. While several ideas sprang up, we heard some common refrains about journalists needing access to community members but not always having the time or resources to develop those relationships or chase down stories. Residents reiterated the need for an open channel to journalists that would allow them to share tips and feedback, draw their attention to important matters and in some cases contribute to the reporting process.

To turn these ideas into next steps, participants and Free Press staff discussed forming a community advisory board for New Brunswick. The board will allow community members and journalists to build on the relationships established throughout the evening and evaluate and implement some of the ideas that came out of the event. The board will add to newsrooms’ capacity to connect with the community. And it will give residents an opportunity to bring those untold stories to reporters.

Perhaps most importantly, participating in a community advisory board will enable interested reporters and community members to meet on a regular basis and continue the conversations that began on Wednesday night.

Free Press will return to New Brunswick on Dec. 10 to begin these follow-up discussions. We’re enthusiastic not only about the event’s success, but about the group’s desire to take the work forward.

What was most striking was the sense of cohesion among the participants. Everyone in attendance was committed to finding ways to support local journalism, and identifying how it can play a role in strengthening New Brunswick.

This is what the News Voices project is all about: getting local residents and journalists to listen to one another, find creative ways to collaborate, and nurture relationships between media outlets and the communities they serve.

We can’t wait until Dec. 10. Visit NewsVoices.org to learn more about our project.