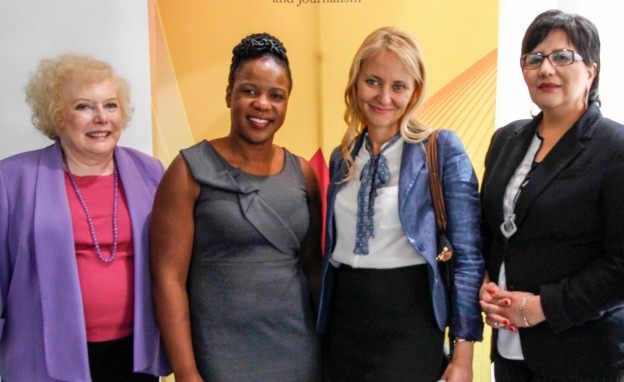 They have faced dangers such as kidnapping, threats and harassment in pursuit of stories while paving the way for the next generation of women in journalism.

For their bravery in journalism, three women were honored by the International Women’s Media Foundation last week at the Beverly Wilshire Hotel in Los Angeles.

"I will not remain silent when innocent people are killed. I will report.” -Mwape Kumwenda

Mwape Kumwenda based in Zambia, Anna Nemtsova of Russia, and Lourdes Ramirez of Honduras accepted 2015 Courage in Journalism awards and shared experiences about the challenges they have faced and overcome. Former Associated Press reporter Linda Deutsch also received a Lifetime Achievement award at the event.

All of the honorees faced battles in their own ways.

“Being courageous in journalism in my country, Zambia, is a challenge,” said Kumwenda, a reporter for Muvi Television. “The law is not on our side. Many reporters are harassed, intimated and attacked by those that perceive them as enemies.”

Despite the danger, Kumwenda has continued to report on social and economic injustice.

“Risks must be taken and a story must be told for as long as it is for the public good and can inspire hope to oppressed communities,” she said. “I will not remain silent when innocent people are killed. I will report.”

Persistence was a theme for these women throughout the evening. Nemstova recalled when she decided to become a reporter 15 years ago. She wanted to tell stories about human rights. She said she knew about the danger, but she wanted to report the truth.

“The people who are really courageous are the characters in our stories,” she said. “It is a big tragedy to lose friends and colleagues in conflict zones. It is an even bigger tragedy and shame to see them shot in peaceful cities.”

Nemstova, who is a Moscow-based contributor to the Daily Beast and Newsweek, has been put in physical danger while reporting, even being held at gunpoint, according to IWMF.

Ramirez, a freelance journalist who has shed light on human rights violations, has been physically threatened too. Because of her reporting, Ramirez was threatened and forced to temporarily leave her country, according to IWMF.

“It is difficult to accept having courage when I have spent many sleepless nights living in fear over many months with latent threats that could materialize at any moment, suffering in silence, unable to tell anyone about the things that terrorize me,” Ramirez said.

A LIFETIME OF COURAGE

While Kumwenda, Nemstova and Ramirez were honored for their international work, Deutsch was honored for her lifetime achievement in the United States through her work for the Associated Press as a special correspondent trial reporter.

She worked for nearly 50 years covering some of the most infamous trials in the U.S., including those involving Charles Manson and O.J. Simpson. She said she found her calling telling important stories in the courtrooms of America.

Deutsch said many of the trials she covered made history and she had “a front row seat.”

As she accepted her award, she said, “The quest for justice concerns all of humanity. My sister honorees have put their lives on the line in the pursuit of truth, justice and human rights. I am honored to share with them a noble profession that shines light in the world’s darkest places.”

INSPIRING THE NEXT GENERATION

Before attending the IWMF awards ceremony in Los Angeles, all four women appeared at a panel entitled “Facing and Surviving Danger to Uncover the Truth” at the University of Southern California Annenberg School of Communication and Journalism.

The women were asked what advice they had for student journalists. Here’s a summary of what they said.

In addition to giving advice, Deutsch recalled what it was like being the only woman in the Los Angeles bureau of the Associated Press. She said she remembers walking into a room full of men with cigars and hearing typing machines clacking away before she worked on one of her first writing assignments at the bureau.

Deutsch also recalled when women weren’t allowed to go out and report at night because it was considered too dangerous. Finally, she reflected on the importance of what women bring to the field of journalism.

“I think that women are able to bring a certain sensitivity to specific stories that sometimes men are not able to. I have covered some of the most heart wrenching trials in America, and I think my coverage often reflects the emotional side of it, what was important about it, why does it touch people in their hearts.”

Alexa Liacko, a USC communication management graduate student, was able to attend the IWMF awards with several USC professors and a handful of students.

“I think it’s really amazing to be here with all these women who we all aspire to be like some day,” she said. “It’s really important for us as young women to have role models and have people we can look up to. I think that events like this really inspire us to look forward and always remember that people have come before us and paved the way for women to do great work in journalism.”