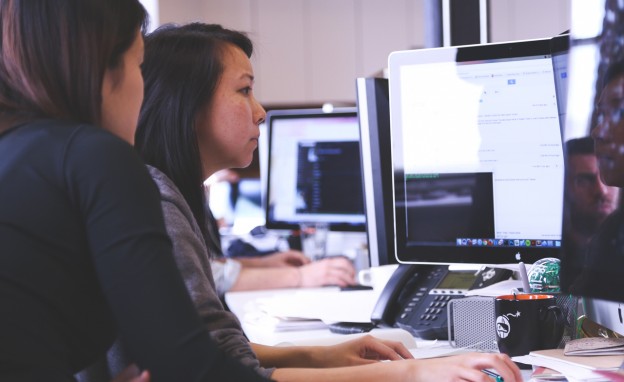 As data journalism evolves, so have our methods of teaching it. Image courtesy of startupstockphotos.com.

In recent years, journalism schools everywhere have been scrambling to teach data journalism and visualization to address the burgeoning demand from newsrooms trying to help the public understand a transformed world that the New York Times has described as “awash in numbers.” The City University of New York (CUNY) Graduate School of Journalism is one such school, where I established and led their program in data journalism from 2012 to 2015 along with Amanda Hickman, now the Senior Fellow at BuzzFeed’s Open Lab. Through seven semesters of continuously evolving tools, assignments, and instructional approaches, I’ve come away with some reflections to share with other instructors tackling this wide-ranging discipline.

Other data journalism educators have written about what works for them, from summarizing the essential data tools, to ways to prepare and approach a dataset, to narrowing classes to focus on just a few datasets. Here, I chronicle where we started and how we ended, and the rationale for the decisions. While the goals of the course remained unchanged, much of the course structure, assignments and toolset evolved. These are the lessons I learned.

"There’s value in not restricting a student’s thinking to conventional forms and getting them to spend time with pencil and paper."

The first iteration of the course required three team assignments, which I had categorized as: a “numbers” assignment, a “crowd-sourced” assignment, and a “media-based” assignment. The numbers story had students reporting and finding stories in newly released published data. The crowd-sourced story required students to gather their own data from surveys or to collect data themselves from scraping the Web. The media-based story was an ambitious attempt to get students to quantify other media sources such as text, sound, video or images.

We quickly ditched efforts to constrain the stories either by the kind of data-gathering or data source, and our latest syllabi required only three stories — two in a team and one as a solo effort. It seems obvious now, but we had much stronger, more coherent packages when students pitched stories that were inherently interesting with news value, rather than stories which satisfied requirements of form — say a “map” story or a “chart” story. Students still had to reckon with the fact that we were telling data-driven narratives, but starting with the story allowed them to explore the data approaches and visualizations that would effectively carry their story. Tempting as it might be to teach mapping techniques, and then have the students go out and report a “map” story to practice those skills, that approach deprioritizes basic storytelling by putting form over content.

Visualization from a student story on campaign bundling in the 2014 New York City mayoral race. Courtesy of Nick Wells and Jessica Glazer.

2. Prepare students in numeracy prior to a course in data journalism

Our course covered basic numeracy (means, medians, percentage change) and an introduction to spreadsheets. But as others have advocated, those essential concepts shouldn’t be reserved for data journalists. Those essential concepts should be taught to all journalists. We made data literacy a part of the core curriculum. Moving basic numeracy to the introductory craft courses meant that we could delve deeper in the data journalism course and spend more time on storytelling with data. As my co-instructor Amanda Hickman put it, “It takes a certain level of skill just to get the hood up.”

3. Set clear parameters for what constitutes a “data story”

For many students (and some news outlets), using data for a story is entirely new. So understanding what a data-driven story looks like and knowing what our expectations were was new territory. We had no word count requirements, and in fact, some of the weakest stories were ones with too much text. We didn’t want long posts with an accompanying graph, but instead, stand-alone visualizations that drove a narrative. We also learned to be very specific on the deliverables required at each stage of the development process: the pitch, storyboard, rough draft and final.

Having a clear definition of what a rough draft entailed (minimum number of hyperlinks, sources, clear captions, etc.) translated to a more refined final submission. Hickman noted that, especially when students are working in a new medium, they need to be pushed to get things done soon enough so they know they can recover. It became our version of the Silicon Valley mantra “fail fast.”

For any tool, we balanced the learning opportunities, ease of use for non-coders and its professional results.  We started by favoring the learning opportunities too heavily. In our first semester, we used Tumult Hype, a relatively new HTML5 authoring application, to integrate multimedia. Although it was easy to pick up, we quickly realized its limitations. As one student criticized in the course evaluation, “The school’s not doing us students any favors by teaching Hype. It is not a professional‐level tool and being able to use Hype is not an in‐demand skill.”

We turned to open-source and popular libraries like JQuery UI and Bootstrap for interfaces, relied on flexible JavaScript frameworks like HighCharts for visualizations, and moved from Google Fusion Tables to CartoDB. We also encouraged students to use Quartz’s Chartbuilder for simple charts and Raw for more obscure types. These tools allowed a range of skills, and especially in the case of CartoDB and HighCharts (in conjunction with JSFiddle), students could examine the code that powered the visuals. “It was a nice interim step to programming,” Hickman told me. In addition, the API was well-documented. “It meant that students could solve their own problems.” That’s a thought that any instructor would embrace.

5. Don’t forget about pencil and paper

The one problem with a tool like HighCharts is that it encourages students to simply pick an existing graphical form like choosing an item off a menu without a thoughtful approach to visual encoding. There’s value in not restricting a student’s thinking to conventional forms and getting them to spend time with pencil and paper. “One of the things we lost when we went to Highcharts is getting the students to assemble the visuals,” Hickman said. “It was hard to be truly creative or innovative in that context. There was a level of creativity that we stopped seeing when we started doing heavier-handed programming.” One option to offset that tendency is to invest some attention in Adobe Illustrator to develop what Hickman refers to as “the flat and well-annotated cousin.”

One of our successes that has been part of the course since the beginning was what we called a Festival of Data. At the start of each class, a different student critiqued a data visualization that they brought in. It served as an ice-breaker to get the class warmed up and talking about data, but it also forced them to be constantly on the lookout for successful (and not so successful) examples in the wild. The exercise helped hone their judgements and at the conclusion of the course, we had a nice collection of data-driven stories and commentary.

A key takeaway from our experience is realizing the need to inspire students about data and data visualization. For our own course enrollment requirements, we had to motivate students who wouldn’t ordinarily think about taking a data course. Sandeep Junnarkar, the director of Interactive Journalism at CUNY, noted that many students are more naturally drawn to other types of storytelling, like visual or audio, despite the hype about data. “I just don’t think most students are aware of the power and the capability of data and data visualization, “ he said. “It’s a far more complex storytelling.” Educators can address the issue, Junnarkar suggests, by creating smaller venues and more intimate approaches such as setting up individual data mentors and informal clubs for more casual and personal interactions with data reporting.

Like all instructors, each year I learn how to teach the course better, and the latest syllabus reflects these improvements.