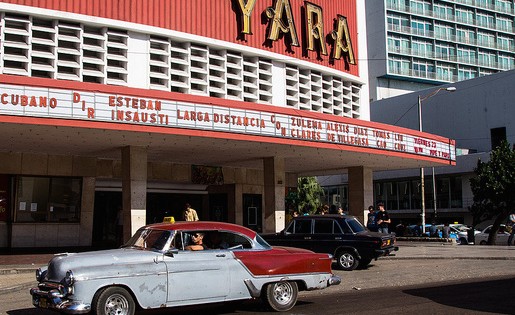 After the Cuban revolution of 1959, cinema became a major component of the socio-political revolution of the Cuban consciousness. Some filmmakers would experience a rise to fame, while the names of other filmmakers were almost forgotten in the public memory. In March, as a graduate MFA candidate in the American University School of Communication, I embarked on the filming of “Nuestra Cuba (Our Cuba),” a documentary that follows the untold stories of the Institute of Cuban Cinematographic Art and Industry’s (ICIAC) first women and Afro-Cuban filmmakers: Sara Gomez and Gloria Rolando.

"Issues of racial discrimination and a lack of a national discussion on race that followed the revolution created an even more difficult space for Afro-Cuban women in cinema."

“Nuestra Cuba“ invites dialogue amongst historians, cultural producers and scholars on the future of Cuban cinema, and the place it holds for the drastic minority of women in the Cuban filmmaking industry. The film confronts the long silence surrounding the impact of Gomez and Rolando not only in Cuba, but also in movements of counter cinema around the world.

For years in Cuba, cinema has been an integral part of the reshaping of the nation’s identity. The world would come to know many Cuban films by filmmakers such as Humberto Solas, Tomás Gutiérrez Alea or Manuel Octavio Gomez. The style of Cuban films after the revolution was distinct, and a direct rejection of the escapism of Hollywood cinema at the time — yet the role of director in Cuba remained overtly male-dominated.

Issues of racial discrimination and a lack of a national discussion on race that followed the revolution created an even more difficult space for Afro-Cuban women in cinema.

Born in 1943 to a middle class black family, Sara Gomez grew to become Cuba’s first woman to direct a film after the revolution. In her short lifetime, Gomez produced 18 films with ICIAC, and she became most recognized for her fiction film, “De Cierta Manera,“ shot in documentary-style.

Before joining ICIAC, Gomez was a journalist, and she studied literature and Afro-Cuban anthropology. The themes of her films include race, religion and women’s issues. Her film “De Cierta Manera,” through a strong female lead, encounters the topics of sexism and class based prejudice.

Gomez had a very stylized approach to cinema. Her work later influenced the rising cinemas of Latin America in countries such as Brazil, Mexico and Argentina. Her work even reached the west coast of the United States, as black filmmakers during the LA rebellion turned to Gomez’s work as inspiration to their own movement of counter cinema.

In 1974, at the very young age of 31, Gomez passed away in the middle of production on her last film, due to complications related to stress and asthma. She left behind a great legacy and footprint on Cuban cinema, yet the general public’s recognition of her life’s work barley scratches the surface.

Gloria Rolando and the Afro-Cuban perspective

For over 35 years, and since the passing of Sara Gomez, ICIAC has only produced one more Afro-Cuban female director. Gloria Rolando began filmmaking in the 1990s immediately following the fall of the Soviet Union and the start of the Special Period in Cuba. Gloria’s work is heavily influenced by Sara Gomez, and in fact, she makes and ode to Sara in her feature film, “Roots of my Heart.”

Rolando’s films are centered on the importance of memory, and the unrecognized history of blacks in Cuba. Unlike Sara Gomez, Rolando was able to form her own independent filmmaking company, Voices of the Caribbean, based in Havana. Rolando has stated that lack of funding and issues of support for the concerns of Afro-Cuban history and narratives have pushed her company to seek alliances outside of Cuba.

Writer and activist Alberto Jones explains that on every level — education, employment and housing — black women in Cuba are consistently handed the shorter stick. Jones has been writing regularly on issues concerning race in Cuba since 1998. In “Nuestra Cuba,” Jones shares that the outlook for black women in Cuba is one of lessened opportunity. A dialogue for change, as Gloria Rolando presents in her films, is what is needed in Cuba.

For many, it is a change that is long overdue.

This piece originally published on the the site for the Center for Media & Social Impact, School of Communication, American University.

Amberly Alene Ellis is an independent filmmaker and photographer based in Washington D.C. She is currently and MFA candidate in Film and Media Arts at American University. She received her BA in Communication at University of Maryland.