How Fold Breaks Stories into Contextual Pieces and Reassembles Them 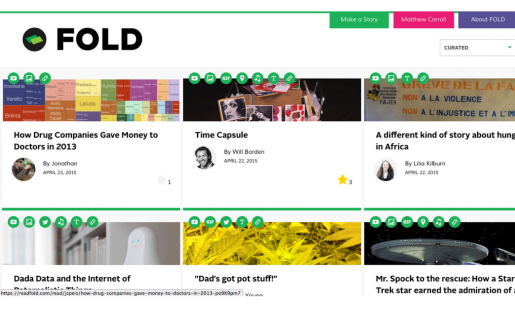 Fold is a platform for telling stories. It makes it simple to add multimedia background information or create context.

Storytelling is evolving. It no longer has to follow the same basic, linear structure. Digital stories are going nonlinear. They are being “atomized” — broken into component pieces and then reassembled in new and interesting ways.

Look at the work done by Storify, Genius, Circa, and Embed.ly, to name a few organizations that are experimenting with new ways of telling stories or conveying information.

"Digital stories are going nonlinear. They are being 'atomized' — broken into component pieces and then reassembled in new and interesting ways."

And now here comes Fold, which opened to the public last week. Fold is a platform for telling stories. It makes it simple to add multimedia background information or create context. It’s easy and intuitive to use. Anyone can publish stories on it; it’s free.

This is how Fold is different: the main story reads as all stories do, straight down vertically. But contextual information is placed to the side of the main story, on a horizontal line. That information can be video, photos, or links to other sites. It sounds complicated, but when you see it, you realize how simple and elegant it is, as you can see below.

In the initial video image, the main story is on the left; context on the right. For more context, follow links in the story or click on the arrows at the far right. The graphic in the lower right is a story map; it shows you where you are.

The information is embedded online, so you are not taken away from the main story. This is a step past hyperlinks.

Where did FOLD come from?

Fold was created by two MIT Media Lab students, Alexis Hope and Kevin Hu, with developer Joe Goldbeck. It came out of Ethan Zuckerman’s News and Participatory Media class. (Transparency alert: I am one of Alexis’s academic advisers.)

It’s a smart design for dealing with context and efficiently deals with a problem that many readers must navigate when reading long-running news stories or complicated issues — what to do with all those paragraphs that deal with the “backstory”.

For instance, think about what happens while you read a recent trial story about the Boston Marathon bomber. The top of the story includes the latest developments. But much of the rest will be information about what has happened previously at the the trial, as well as details of the bombing from 2013. That’s the backstory.

The problem is this: not everyone wants to read the backstory, maybe even a majority of people. Readers who have followed the trial every day will read the first few paragraphs of new information and then ignore the many lines of ink devoted to backstory. They don’t need it because they already know it. Other readers, less up-to-date, may read all of it.

For the up-to-date reader, that backstory is an annoyance — it interrupts the flow of the new information they want to read. Why the heck do I need all this backstory, if I already know it?, they think. And that’s what makes Fold so interesting. All the backstory is placed off to the side. If you need it, it’s there to peruse. If you don’t need it, ignore it.

It looks different from many other storytelling platforms. For one thing, it’s a “card”-based system. Information is contained on small pieces of real estate that are the rough equivalent of index cards.

The main story is written on vertical cards, while contextual information is added to the side. Aleszu Bajak, editor of Storybench, does a nice job explaining the mechanics of adding information.

I’ll just add — it’s remarkably easy to use. The learning curve is minimal.

Fold also also makes for a different writing and reading experience. I didn’t fully understand how different it was until I created my first story in Fold.

I imported a story into Fold that I had already written on Medium.com about my one near-meeting with Leonard Nimoy a.k.a. Mr. Spock.

The main stories are the same, almost word for word. But the look and feel are totally different. The Medium.com story is simple and elegant. It looks great and is an easy read.

The Fold story on Spock includes video of the 1967 Red Sox, pictures of a long-defunct department store, and music from a Star Trek movie. It encourages meandering through the pictures and other pieces of multimedia.

It also makes you think hard about how to write a story. Do you want to include that little piece of background information in the main story? Or should it be placed in a contextual card? How much context is too much? Will people read the context cards I’ve created, or will they see it as extra work to avoid?

(As an extra comparison, I’ve done this story on both Medium and Fold. Which works better for you?)

It also makes for a very different reading experience. How will readers react to all this context that’s been added? Will they take the time to at least browse the context cards? Will they engage with the extra material?

I’ve heard the argument that people are more comfortable with linear writing in relaxed settings, whether it’s books or news stories. Sit in the easy chair, put your feet up, and read for awhile.

I was at SxSW and spoke about Fold in the context of the atomization of news stories. The question was asked: is this better or worse for readers?

My answer: It’s different. Not better, not worse, just different. To quote that well-known football philosopher, coach Bill Belichick: it is what it is.

Reading on the internet supposedly results in more “solution-hunting behavior.” That argument goes like this: the internet is not about a leisurely read. It’s about getting information. Short, punchy reads are best.

I’m not sure I buy into that entirely, although there’s definitely some truth there. Still, I’ve read enough investigative pieces and novels on my phone to know that long-form reading works OK, too.

Anyway, Fold is definitely a storytelling tool worth trying. It’s an attempt to add contextual information in a way that is non-intrusive on the main story. I’ll be interested in hearing what you think about it.