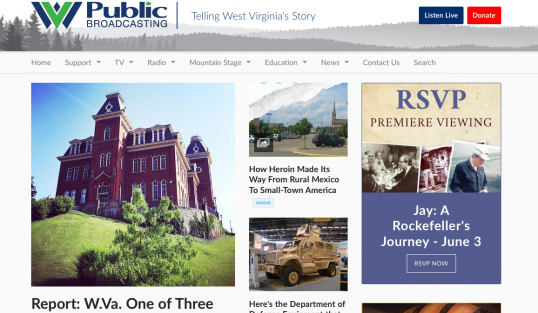 WVPB has focused on serving the digital audience first, but the vast majority of its resources, time, and money are still being spent in the non-digital parts of its enterprise.

Being “digital first” is no longer a new idea. In fact, I risk appearing to be very “2005” by even bringing it up. But if everyone agrees that public media organizations must be digital first, why is it that we so rarely, truly are?

When I started at West Virginia Public Broadcasting two years ago, we created a digital department and started talking about it as “our third channel,” every bit as important as radio and TV.

"The truth is we can do the hard work of meeting change, or we can be like the newspaper industry and wait for change to overtake us -- and then scramble to survive."

This screenshot of WVPB interactive map shows population losses in red and increases in green.

Still, the vast majority of our resources, time and money are being spent in the non-digital parts of our enterprise. I don’t think WVPB is alone in this either. So, what’s holding us back?

Just because we see the world is changing doesn’t mean we want to embrace it.

Most of us went into public broadcasting because we like to make television and radio. And we learned to do it in a form and format that is comfortable to us. The hour-long documentary, the four-minute radio feature–these somehow just feel right.

We also used to be able to control the message and tell the stories we wanted to tell, much more than today. We’re not used to sharing. We like being the “broadcaster,” the ones who others watch.

Now we can know, intellectually, that we need to change. We can see this is necessary. Many of us, however, can’t help but mourn some of the good things about the old system. It causes us to drag our feet.

Any time we learn something new, we go through a period of incompetence. It can be a scary and uncomfortable experience.

When I was a news director, I told my reporters to tweet more often. But no matter how much I nagged them, some reporters only produced a pathetic one or two tweets per week.

Then, one of our prolific Twitter users introduced everyone to Tweetdeck and Hootsuite. He explained how he used Twitter to take notes during an event. All of a sudden, the reporters were tweeting left and right.

Sometimes what managers see as insubordination is really just a fear of the unknown and lack of skill.

West Virginia Public Broadcasting, by and large, is doing everything it did before the digital age. We hold events, we instruct teachers, we produce radio shows and television documentaries, we broadcast throughout the state.

West Virginia Public Broadcasting has fewer staff than it did 10 years ago,but we’re doing much, much more. We have become more efficient, and though technology helps, it still takes people.

The truth is, we’re not willing to let go of any of the old duties, and we’re adding new ones. Simple math says we need more staff. If we don’t have them, digital is often the first thing that gets scaled back.

This goes along with bodies, but is more than just staffing.

We’ve been successful getting grant and underwriting funding for our digital-facing efforts: a project using sensors to monitor and report on water quality in real time, the Iraq and Afghan veterans app, and the WV STEAM educational videos.

But grant funding is often short-term and hard to predict.

Meanwhile, our so-called “core” operations of radio and TV don’t depend on grant funding. They rely on more stable sources: government funds, membership contributions, and underwriting.

It’s an old adage in journalism: “follow the money.” In this case, the money shows what we really value. Digital is nice, but radio and TV are essential. That’s what our spending tells us.

“Yeah, that online stuff is fine, but when are we going to get it on TV?”

More than once, I’ve had staff ask that about our digital projects. And yes, it makes sense to repurpose much of what we do for many platforms.

But increasingly, what we do may not end up on TV or radio at all – and that’s OK. Online is a different universe, requiring a different set of skills and values.

TV and radio program directors are hugely important to the success of a public media station. But their role is going to have to change.

In a world of on-demand media consumption, the value to figuring out which shows to air at which time will go down.

Instead, they can double down on their role as curators, finding the best of local, national, and international content and presenting it to our audiences in whatever format they prefer.

The truth is, we can do the hard work of meeting change, or we can be like the newspaper industry and wait for change to overtake us – and then scramble to survive.

I used to work in that newspaper world, and I would rather spare public media that pain and uncertainty. It starts with realizing the barriers to digital first and tackling them.

Scott Finn (@radiofinn) is executive director and CEO of West Virginia Public Broadcasting, an indispensable resource for education, news, public safety and economic development for West Virginia and all of Appalachia. He describes himself as a “recovering reporter,” serving stints as news director at WUSF in Tampa, news director and reporter for West Virginia Public Broadcasting, and statehouse reporter for the Charleston Gazette. As a journalist, Finn received several national awards, including the Fred M. Hechinger Grand Prize for Distinguished Education Reporting from the Education Writers of America, two awards from Investigative Reporters and Editors, the Gerald Loeb Award for excellence in business reporting, and the Nancy Dickerson Whitehead Award for Excellence in Reporting on Drug and Alcohol Problems.