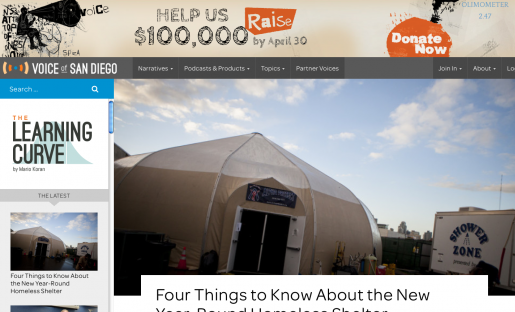 Ry Rivard is the first full-time hire to increase VOSD in years. His arrival represents the beginning of a new phase of expansion, a strategy for growth that’s either the biggest crowdfunding campaign in journalism that you’ve never heard of or something else entirely.

He comes to the nonprofit news outlet from Inside Higher Ed in Washington D.C. and will work as an investigative reporter focusing on issues like housing and development.

Rivard fills the first new reporting position since 2011 and is the first person hired to increase full-time VOSD editorial staff in years. His arrival represents the beginning of a new phase of expansion, a strategy for growth that’s either the biggest crowdfunding campaign in journalism that you’ve never heard of or something else entirely.

“I just want to be clear it’s not typical crowdfunding,” said Mary Walter-Brown, VOSD Publisher and COO. Walter-Brown oversees VOSD’s revenue generation and membership program. “This is our long-term vision of what we want our staff to look like, and little by little we need to raise enough money to hire each of these reporters.”

Rivard’s salary is paid for by the Bigger Voice Fund, the publication’s philanthropy-crowdfunding hybrid that started last year to raise $600,000 and hire six new full-time reporters to focus on issues pertinent to the city’s future.

Image originally posted on Through the Cracks

That’s several times more than the highest grossing campaigns in the Journalism category on Kickstarter, but unlike Kickstarter this isn’t one big 30-day campaign. Each position will be funded one at a time, likely no more than one to two a year, Walter-Brown said.

Depending on the size of a contribution from a local foundation next month, crowdfunding could begin soon to hire a reporter who covers a reliable resources beat, she said.

The topics investigative journalists will focus on were determined with help from a San Diego Foundation report, which highlights issues expected to impact the region in the future.

“I think having a tangible thing you can raise money for is very compelling,” Walter-Brown said. “If we’re going to be figuring these things out, we’re going to have to be asking the questions to get the answers, to look at pragmatic approaches to how we’re going to deal with these issues.”

The first year of Bigger Voice Fund positions are paid for in full with money raised from large donors or grants. Whatever can’t be raised from those sources, if a “bite-sized piece” remains, will be sought from VOSD members.

Major donors like the addition of crowdfunding, Walter-Brown said.

“A lot of times donors get very excited about that and say ‘I’ll give you $50,000 if you can find the rest,’” Walter-Brown said.

In 2013 donations of more than $5,000 made up 43 percent of total revenue and 71 percent of membership revenue. In the case of Rivard’s position, funding came entirely from grants, Walter-Brown said.

“Obviously we don’t want to rely on foundations to provide funding for everything. We want to be self sustainable,” she said.

For the better part of the last decade Voice of San Diego has been held up as one of the best examples of local nonprofit journalism in America, a fixture in studies of sustainable practices for nonprofit news organizations.

Knight Foundation began to study them in 2011, along with names like MinnPost, Texas Tribune, ProPublica and the Center for Investigative Reporting. The latest report was released last week.

Total revenue has increased 27 percent to $1.6 million in 2014 compared to the previous year. In 2013 grants from foundations made up about half of all VOSD revenue. Now it’s about one-third.

The publication relies on a mix of sponsorship, events, syndication, a native advertising program for nonprofits and donations, which includes money from more than 1,900 members.

VOSD has gone though a series of changes and new approaches lately. Alongside BIgger Voices Fund, there are plans in the work to begin a week-in-news production akin to “This American Life” or “60 Minutes.”

Last year MinnPost and VOSD received $1.2 million in funding from the Knight Foundation to get more members and improve membership retention. With the money VOSD wants 25 percent of revenue to come from members who give monthly or annual donations.

The grant to improve membership might produce results worth emulating for nonprofit news outlets with membership programs, or maybe even Beacon or Patreon users who rely on ongoing funders.

VOSD deputy editor Catherine Green gave a presentation on how to develop a VOSD membership model a few months back.

“If you look at it crowdfunding is our membership,” Walter-Brown said.

Part of that Knight Foundation money was spent on a new website, which was launched when VOSD turned 10 years old in February.

One feature you should not expect to see on the new website is Impaqme, an Institute of Nonprofit News invented widget that has appeared on the website in the past which raises money each time a story is shared in social media.

As part of their restructuring plan, the Institute for Nonprofit News has said they want to increase usage of the widget in the future. VOSD is an INN member but won’t be using Impaqme, Walter-Brown said.

“I really want to be consistent in my messaging to my members. The expectation [for members] isn’t $5 at the end of an article. The expectation is that they give $500 a year. I think if you give people too many options and too many simple ways out, they’d rather give $1 instead of $100, which is what I want.”