Periscope, Meerkat and the Journalism of Now 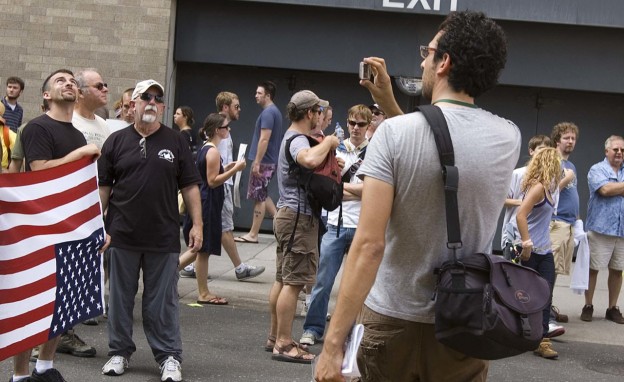 Photo by The UpTake and used here with Creative Commons license.

Every semester I like to watch trends in digital media for an assignment I construct for the last month of class. I call it my “Future of Journalism” assignment, and it’s intended to introduce some new tool, trend or idea to the regular curriculum. To be fair, about half of these trends stay big for a while after the assignment, while others fade. The goal isn’t about the latest fad, though, but rather about teaching them how to see what is emerging and think about how it fits into their journalistic work.

This semester’s Future of Journalism assignment centered on live streaming video. In the past two months, we’ve seen the emergence of two new apps — Meerkat and Periscope — that have turned streaming video into a niche experience into something that anyone with an iPhone can do. Streaming video has been around longer than these apps, available via services such as Ustream, but these apps have added simple, elegant interfaces and social sharing ease to the mix. Regular citizens and everyday reporters alike are now broadcast reporters.

"In the past few weeks I've watched someone broadcast a sunset from a bayou in Louisiana, another stream a lecture involving an author I admire, and I've watched a storm chaser Oklahoma live stream a tornado on the ground outside of Tulsa."

(Editor’s note: A separate post on Meerkat ran last week, and our #EdShift chat at 1 ET Tuesday, April 14, will cover streaming services and their usefulness in classes and newsrooms.)

Consider what Dan Pfeiffer, the former press secretary for President Obama, said in a post recently about live streaming and the upcoming 2016 presidential campaign:

Imagine the Ferguson protests or the Walter Scott shooting going live, not depending on uploaded video or TV crews with satellite trucks, but rather citizens streaming from a mobile phone. Streaming video’s power should be obvious.

And now we go live

Periscope and Meerkat both work in similar ways. You open the app on your phone to initiate a live broadcast from wherever you are, type in a few words about what the viewer is about to see, and enable that text (plus a link) to be shared to Twitter. If a person is already following you on the app, they also can get notifications that you are broadcasting via iOS notifications.

An example of how Periscope notifies you of live streams in your iOS notification center, turning your lock screen into a type of TV channel selector.

The Twitter and notification experiences are different but interesting. If you rely on tweets to publicize your livestream, it depends on followers being on Twitter and seeing your post in the moment. It also relies on hoping your Twitter followers aren’t muting Meerkat or Periscope tweets out of sheer annoyance. The notification scenario is different. Install Periscope, for example, and sign in with your Twitter account and you’re automatically following any Twitter followees on Periscope. Throughout the day, you’ll get notifications of new broadcasts from people you follow — like a series of TV channels popping up and becoming available for moments. The Twitter stream is great for breaking news whereas Notifications is about everyday events. It’s wise to use both.

In the past few weeks, I’ve watched someone broadcast a sunset from a bayou in Louisiana, another stream a lecture involving an author I admire, and a storm chaser in Oklahoma livestream a tornado on the ground outside of Tulsa. Journalist Dave Weigel streamed from a Rand Paul campaign event (much to Paul’s annoyance) and Major League Baseball reporters are streaming everyday things at the ballpark, such as batting practice.

Challenges and opportunities for journalists

The trend creates interesting new horizons for journalism. No longer do people need satellite or cable to watch a campaign event. Everyday citizens can capture everyday events. The potential for broadcasting candidate gaffes, gotcha journalism, and paranoia about cameras at live events is bound to increase. And this says nothing about the tricky issue of rights broadcasts for organizations like pro sports, which sell the exclusive rights to broadcasters but surely can’t feasibly stop a stadium full of fans with phones. The NCAA famously stops reporters from liveblogging events due to exclusive rights. How is it going to handle ubiquitous livestreaming video?

Periscope allows you to see who has joined and who is leaving comments.

The main challenge facing journalists right now is picking a platform. Meerkat or Periscope? Both do similar things, but about a month ago Twitter cut off Meerkat’s ability to do easy following via Twitter follow lists, likely in an effort to boost its own Periscope app. Both apps allow viewers to ask questions, which pop up on screen like text message bubbles, and journalists can then answer with their voices.

Although both apps let you save your stream as a video file when you’re done, one of the things that makes Periscope more polished is that your video lives on for followers after you’re finished streaming. It can be annoying to see a stream link on Twitter, click on it, and find that the event has already ended. Periscope allows viewers to watch in a slightly delayed fashion after you’re done.

You’ll have to get over your hatred of vertical video, too. Turning your camera horizontal is fine for mobile viewers, who also can flip their device, but when watching on a PC, the screen doesn’t turn horizontal on the monitor. Embrace capturing video in vertical form if you don’t want to leave that audience behind.

Then there are the creepers. Oh yes, there are creepers. Because your livestream links are public, some people just scan Twitter’s live public feed for links so they can leave sexually suggestive, offensive, and occasionally threatening messages in the comments. Be forewarned.

Two weeks ago I gave my students their first taste of live streaming video (assignment is here; it is licensed under Creative Commons, and I’m perfectly happy if you remix it). I didn’t have a clear pedagogical goal other than for students to experiment with the technology and think about journalistic use. The results were interesting. Writers who never thought about how to pan the camera slowly or watch their giggles realized; unlike with video editing, you can’t remove something from a live event.

In my class, we ran into a few issues that are worth remembering if you’re going to teach live streaming in your class:

I don’t worry about teaching the technology. There was a whole lot of tech fail happening during the assignment. The video was often of poor quality. But every student immediately saw the potential for journalism. After some initial exposure in one class lab, I witnessed my students live streaming events they were covering and people they were interviewing. With every broadcast, the quality gets better and the use is more thoughtful. It’s worth getting students on the path to improving their live streaming skills now.

3 responses to “Periscope, Meerkat and the Journalism of Now”