Journalists Fight for Open Government in The Face Of Secrecy 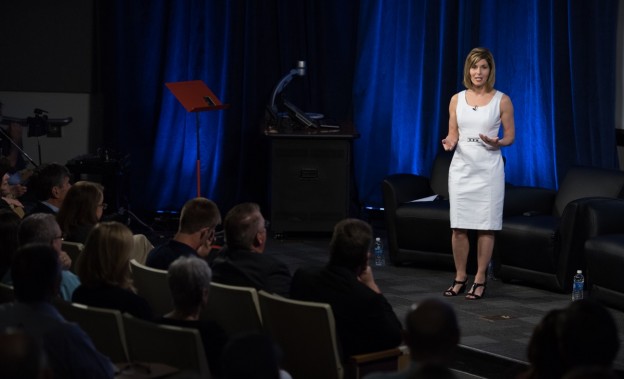 Sharyl Attkisson gives a keynote address on the rightful owners of public information at the University of Florida's College of Journalism and Communications on March 26. Photo by Steve Johnson.

“It is not unique for federal officials to go to great lengths to get around having to turn over documents or respond,” Sharyl Attkisson said during a keynote address last week at the University of Florida’s public information conference, “Breaking Down Walls: The Fight for Open Government.”

"We have an equal right to the information collected by the government ... and we're not treated that way." - Sharyl Attkisson

One journalist told the tale of being denied documents about the terrorists who held him hostage for six years because it would infringe upon his captors’ privacy.

Another told of a time when she filed a Freedom of Information Act request, only to receive a response a decade later.

While it’s easy to tell FOIA horror stories, the event brought members of the media, law practitioners, students, and faculty together not only to discuss the challenges they face when attempting to acquire public records but also to work toward solutions to the problem.

The conference, which was hosted by UF’s College of Journalism and Communications and Attkisson, stretched over two days and included panel discussions on dismantling the wall on the federal and state levels.

What resulted was a call to action.

The group of journalists and law professionals agreed that it’s critical to report on FOIA violations to make audiences aware of why the issue is important. One way to do this is by leaving blanks in stories where public information was denied.

The Miami Herald did just that when they published two copies of the same report, obtained via public record requests from the Department of Children & Families a year apart. The latest release of the report was subject to DCF’s new disclosure policy, which led to almost every word being blacked out, whereas the first released copy of the report had about a sentence or two blacked out at most.

It’s examples like this, of the public’s freedom to information being unnecessarily obstructed, that led conference attendees to want to create a “Stonewall Hall of Shame” to chronicle the worst cases of government secrecy.

All speakers agreed that the reporter needs to be held just as accountable as the government official.

Ted Bridis, a conference panel member and Associated Press news editor in Washington, D.C., said FOIA follow-ups and requests are part of AP reporter’s performance evaluations. He urges other newsrooms to make it clear that transparency and follow-up is part of a reporter’s job regardless of beat or area of coverage. Bridis said the AP also has software that automatically reminds reporters to follow up on their FOIA requests.

When addressing the young journalists at the conference, Attkisson urged them all to not be intimidated by FOIA requests and start filing them immediately.

“We have an equal right to the information collected by the government … and we’re not treated that way,” Attkisson said. “You should have a whole folder on your computer filled with your FOIA requests.”

For those journalists who go as far as to take the fight for public records to the court room, they can sometimes be faced with the tough choice of whether or not to testify and become part of the story. Most of the journalists in attendance agreed that when situations like these present themselves, it’s important to be confident, speak out, and testify in legislative sessions or other venues.

“We’re an industry that should be able to advocate for ourselves,” Attkisson said.

Bridis responded: “But we’re not comfortable being advocates.”

Attkisson has pushed past the awkwardness of becoming a part of the story to move toward the greater good of a more open government by testifying in a Senate Judiciary hearing.

The Burden of Knowledge

On both days of the conference, the group talked about where the burden falls. Who is responsible for making sure the government is functioning as it’s supposed to? The consensus was clear: it’s the journalist’s responsibility to report and citizen’s responsibility to consume.

“I think people are really busy and their attention span is short, they’re drinking from the fire hose from a lot of different news sources and news stories,” Bridis said.

But when quality work is produced, such as the AP’s use of Rep. Aaron Schock’s Instagram account’s metadata to track where and when he used donor funds to pay for his private air travel, consumers notice.

And for Bridis and others, the endless FOIA requests are worth it when they achieve greater government openness. Just a few weeks after the AP released findings from its investigation of Schock’s travel spending, he resigned from Congress.

“I think that when we have written convincingly and with authority about instances when the government has really fallen down on the job, we do see a lot of outrage,” Bridis said. “We see government being very responsive, you know being forced to talk about why they did what they did and how they are going to do better.”

Erica A. Hernandez is a senior at the University of Florida studying Journalism. A bilingual Miami native, she currently works as a chief web producer at the university’s NPR affiliate, wuft.org, and as a sports reporter at the Independent Florida Alligator.