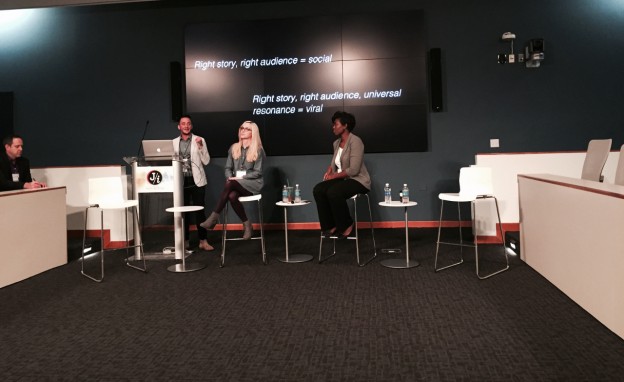 "Every story starts with audience," Thomas McBee of Quartz told the crowd at Journalism Interactive. He was joined in a session on viral content by (L-R) Mashable's Annie Colbert and Upworthy's Erica Williams Simon. Photo by Deb Wenger.

Everywhere you looked at the Journalism Interactive conference in Columbia, Mo., you ran smack dab into the news audience. By my way of thinking, it’s about time.

The setting for former NPR and Twitter exec Vivian Schiller’s keynote looked a little like a comedy club with its brick wall and dramatic spotlight, and she got the crowd laughing right off the bat when she pointed out WaPo columnist Gene Weingarten’s timely tweet about one of the buzzwords she planned to talk about — “content.” His complaint:  “I just learned that there is a Wapo job called ‘content strategist.’ I may have to die now.”

"The most important data is audience response that leads us to action." -Vivian Schiller

I just learned that there is a Wapo job called “content strategist.” I may have to die now.

But it may be journalism’s funeral, according to Schiller, if we don’t stop thinking about ways to create content that’s “platform agnostic.” Instead, she says, we need to be “platform devout.”

“As we create content, we need to be thinking about the form factors and devices that people are consuming that content on,” Schiller said.

She says news organizations have to think about how people are experiencing that content — whether that’s getting used to vertical images on Snapchat or how to design content that people actually want to view on their smart watches.

Audience Data Is What Matters

This leads me to one of my favorite takeaways from the conference, a new way for journalism educators and practitioners to begin thinking about data. As Schiller pointed out, the word has turned into jargon. It now means all things to all people and as a result, we’re “drowning in data” but parched for insight.

“The most important data is audience response that leads us to action,” she said.

Can I get an amen? This kind of audience understanding and subsequent response is the focus of a class I teach at the University of Mississippi called Journalism Innovation. Students in this capstone course partner with a local website to get Google Analytics and Facebook Insights data about every story produced for the site. The analysis of this feedback from the audience then directly affects the subsequent content that the students produce. It’s my hope that this will foster an appreciation of audience, an understanding of engagement and insight into the ways in which newsrooms are making data-driven decisions as our graduates go off to work for traditional news organizations like Public Radio International (PRI) and Cox Media properties, or perhaps Mashable, Upworthy or Quartz, all of which were represented at the conference.

PRI’s Social Media Manager Angilee Shah told the crowd in a session on audience metrics that she thinks journalism schools ought to be requiring a basic stats class to help students navigate the data-driven world they’re about to enter. She also suggests that our ability to know and serve the audience is only going to improve.

“It’s like learning a tennis stroke,” Shah said. “You keep practicing and practicing until muscle memory takes over and you can do it without thinking. The more data we get, the more we can refine that stroke.”

It certainly follows that the more practice we can give our students in thinking about audience behavior, preferences and consumption habits, the better they will be at producing journalism that resonates. In fact, if they get really good at it, their work may reach content nirvana and go viral.

In a session on viral content that promised to put attendees several degrees closer to Kevin Bacon, Thomas McBee, director of growth at Quartz, says every story the digitally native news outlet produces starts with audience.

McBee, Mashable’s Viral Content Editor Annie Colbert and Upworthy’s Deputy Editor Erica Williams Simon are tasked with making content “shareable, viral, and distributed” at their respective organizations. Those are words that you would expect to hear in the marketing or PR class down the hall, but McBee says that they need to replace the terms we’re currently using to talk about journalism.

“There is no audience demand for landing pages, packages or articles,” McBee said. “The audience wants to know things.” At Quartz, McBee says they produce journalism focused on obsessions or on sparking a dialogue.

All of this talk does make some educators nervous. They worry when journalism-focused conferences don’t seem to include enough discussion about the importance of writing and other journalism basics.

“I’d like to think that’s now a given,” says Lynda Kraxberger, associate dean for undergraduate studies at the University of Missouri, host of this year’s conference. “It’s really no longer a question of tech or basics. It’s a matter of ‘and.’ Journalists need both.”

Media consultant Vivian Schiller breaks down the meaning behind the media buzzwords at the Journalism Interactive conference. Photo by Deb Wenger.

Schiller seems to agree, rounding out her talk on going beyond the latest buzzwords with some terms she hopes will always matter to journalists and the audiences they serve – curiosity, integrity, character, bravery and accountability – to name a few on her list.

Schiller also said it’s time for technology to fade into the background when we talk about journalism, and we’ll know we have arrived when no one in a news organization has the words technology or digital in a job title. And I think we’ll know we have arrived in journalism education when the conversation can move beyond polarizing discussions about editorial vs. tech skills and move to a place where we put the audience front and center.

“A journalist’s job is to follow through,” Schiller said. “Once you’ve produced the content you must engage and understand deeply how the audience is viewing your work.”

Deb Wenger is an associate professor and director of undergraduate journalism in the Meek School of Journalism and New Media at the University of Mississippi. Her new co-authored book, Managing Today’s News Media: Audience First is forthcoming from Sage in August.