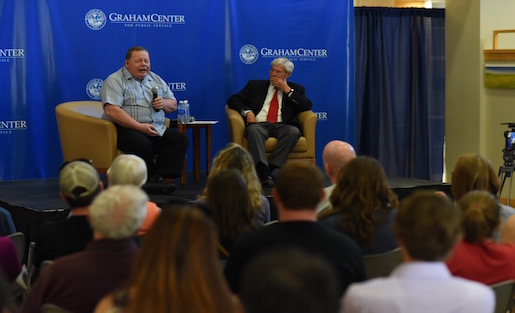 While waiting at his dentist’s office in San Francisco, an American named Bill Brady decided to write a letter to Hezbollah.

The letter was written in Sharpie and addressed simply to “Hezbollah Beirut, Lebanon.” In it, Brady asked the men responsible for the 1985 kidnapping of Associated Press journalist Terry Anderson to take Brady in his place.

“To operate in a high-risk environment takes not just courage. It takes wisdom. It takes training. It takes a very great deal of preparation.” -Terry Anderson

“Please,” he wrote, “let this person go home and see his baby being born.” Anderson’s second daughter, Sulome, was born while he was in Hezbollah’s custody.

But Brady never heard from the militants he sought to reason with.

Brady shared his story with the man he tried to save in front of a crowded room at the University of Florida’s Bob Graham Center for Public Service earlier this week.

Bill Brady drove over 250 miles from West Palm Beach to Gainesville, Fla., to meet the man he once tried to save from Hezbollah 30 years ago. Photo by Steven P. Johnson/University of Florida.

Anderson spoke to that crowd on Monday, exactly 30 years after he was taken. Without lingering too long on his captivity, Anderson presented his own challenging but vibrant experience with the Middle East and shared his opinions on the continued turbulence there.

‘What Can I Say About the Middle East?’

At the time he was taken hostage, Anderson was the AP’s chief Middle East correspondent in Beirut.

He arrived there in June 1982 following a trail of Israeli tanks. Within days, he said, West Beirut was under siege.

“I stayed there throughout that summer of the siege,” he continued, “and as you can imagine, I saw some pretty horrible things.”

A ceasefire at the end of that summer convinced Anderson the war was coming to an end. After some time off, he agreed to return to the AP bureau with his wife and child. For a time, his coverage was about rebuilding and peace.

But while Anderson’s father visited, the shooting and mortar fire started up once again.

“It became obvious at that point that the war was not over,” he told the crowd.

Anderson managed to get his father and eventually his wife and daughter out of the country before the war escalated. Ultimately, the war in Lebanon went on for 16 and a half years.

Pulled From His Car

Anderson covered that war until the day a group of young men with guns pulled him from his car and took him away for the next six years and nine months.

Anderson, after one man asked why he thought he’d been taken, explained that groups like Hezbollah have no concept of what a journalist really is – they are often thought to be spies.

He also admitted to ignoring signs of his imminent danger out of the arrogance that comes with familiarity.

It had been Anderson’s job to understand that region and the groups acting within it – their politics, their religion and even their economics. They shared little apart from Islam.

Hezbollah, a militant Shiite Muslim group formed in Lebanon in response to the Israeli siege, was responsible for Anderson’s kidnapping, but that was not immediately apparent.

“Anybody with a phone could become a terrorist group in Lebanon,” he said.

Anderson said he learned a lot about his captors – there was “no Stockholm Syndrome crap going on,” though. And he and his fellow captives tried to show them they were not criminals.

Despite his experience, Anderson said he does not believe ransoms should be paid for hostages, but the concept of “no negotiation” should be changed because it has come to represent an excuse to do nothing.

And at a time when violence displayed by groups like ISIS, or the Islamic State, has risen to an unimaginable extreme, talk deserves a chance.

“We know very little about who these people are or what they’re trying to do or what they really want and believe,” he said. “Wouldn’t it be easier if, even through intermediaries, we talk to them? I don’t know. We haven’t tried it.”

Anderson said we have a tendency to not even try to understand terrorist groups and their motives. No matter how evil, though, that understanding could be an important step to finding a solution that works.

“You can’t solve problems with 500-pound bombs – even if you call them smart,” he said. “Armies and bombs are very poor tools for solving political problems.”

‘You Take Risks Because You Need To.’

According to Anderson, young independent journalists without training, equipment or support are increasingly covering dangerous areas.

“We [the journalism industry] have come to recognize that is a moral failing on our part,” he said. “We won’t send our own journalists out there, and yet, we’ll pay these young people to go and risk their lives and not take responsibility for them. That’s not right.”

Anderson said young independent journalists are covering some of the most dangerous conflicts and countries today, and they need support. Photo by Steven P. Johnson/University of Florida.

That system is changing, he said, with an agreement by major news organizations on a set of principles that will serve to provide support and training to independent journalists.

“To operate in a high-risk environment takes not just courage,” Anderson said. “It takes wisdom. It takes training. It takes a very great deal of preparation… And we are increasingly recognizing that there are young people who are trying to do this without those things.”

Risk comes with the territory as a foreign correspondent, but Anderson said he knows very few who would say they take risks for the thrill. Risks are taken for a purpose.

“You take risks because you need to,” Anderson explained. “No one wants to get killed. If you get killed, you can’t file your story.”

Though Anderson described his time as chief Middle East correspondent as “the most interesting job” he could ever imagine, his time in captivity understandably changed him.

The specialists Anderson worked with after he was released told him it would take as long as he was held hostage to recover. In fact, Anderson said he’s not even sure if he has recovered today.

“I am who I am,” he said. “That period, undoubtedly, is part of who I am – it will never go away. I’ll never forget it. But it is only part of who I am, and I have tried to use what I learned in that experience and others to make my life worthwhile.”

After his talk, Anderson noted the outpouring of support he has received over the years from people just like Brady.

“There was a real connection there that I’m not sure I fully understand,” he said. “There is a wonderment about the way that feeling has stuck and has continued and still crops up like you saw tonight.”

Katie Campbell (@_KECampbell) is a senior studying journalism at the University of Florida. She currently works as a chief web producer at UF’s NPR affiliate, WUFT News, and will be joining a team of investigative journalists for News21 in the summer of 2015. You can read more from Katie and follow her around the world on her blog.