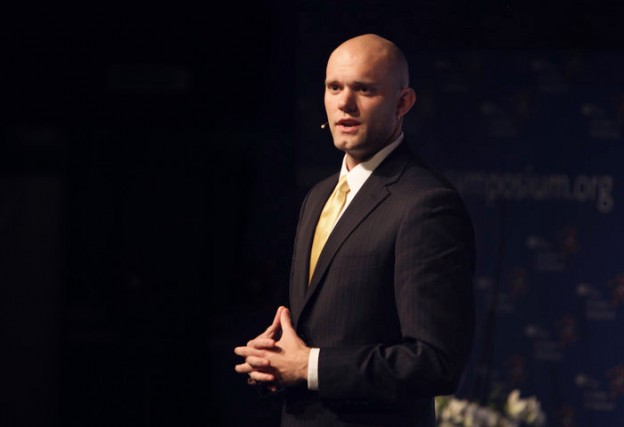 If you were to go back and interview James Clear’s high school English teachers, none of them would identify him as a particularly talented writer.

“It was never top of mind for me that, oh, I should make money from my words or I should build a business around writing,” he told me in a recent phone interview.

"Finally I said to myself, ‘Dude, this is stupid, I just need to put it out there.’” - James Clear

In college, he majored in biomechanics, and, unable to decide between med school or a PhD in a science-related field, he instead enrolled in business school. It was there, while watching his classmates launch their own businesses, that he got his entrepreneurial itch. He had won first place and a $10,000 award in an international essay competition on leadership, and upon graduating business school he decided to use this money as start-up capital for some as-yet-to-be-determined startup. Within a few years, he had 200,000 monthly blog readers, 100,000 email subscribers, and a substantial base of customers who paid $50 a pop to gain access to his insights on business leadership and forming productive habits.

The journey from business school graduate to sought-after writer and speaker was nowhere near linear, however, and instead was plagued with dead ends and bad investments. Clear’s first bad turn came almost immediately upon graduation, when he paid $1,500 to a team of developers to build a mobile app. He described it as a kind of Instagram, but with no social network functionality.

But, just as he did with all subsequent failures, he took away a vital lesson from the experience that he would apply to all future endeavors.

“I realized first that I need to be more careful about where I spend my money,” he explained. “And second, I need to learn how to get an audience. I had no one to market the app to. I just built the product and thought if I build something, people will like it. So that led me down this path to wanting to learn how to build an audience. Everybody that I was reading as I researched this information said that you need to build an email list, and so I spent the next six months researching everything I needed to build out this list.”

Clear then began throwing things at the wall of the Internet, seeing what would stick. He launched multiple platforms, most of which no longer exist, each with the goal of generating email signups. He also started writing guest posts on already-established blogs, usually on the topic of business marketing.

“The funny thing is that you pretend you’re this expert, but in the beginning, you’re not an expert at all. I didn’t know anything about marketing a business, but as you write about it each week, and being the person who researches it each day, you become the expert.”

Slowly but surely, he built an audience and, more important, a growing email list. Eventually, he rolled out an online course about email marketing, and he managed to scrape by selling the course and working some freelance web design projects on the side. He had built up his email list to 20,000 subscribers, but all this was a precursor to what Clear really wanted to be doing with his career.

What I Do When it Feels Like My Work Isn’t Good Enough – http://t.co/RrXJwoUdsu

For years, Clear had been fascinated with the science of habits and behavior change, and he wanted to write about the connection between physical health and psychology. But he was, in his own words, “a huge wimp.”

“I kept telling myself what everyone says about their own work,” he explained. “It’s not good enough. My ideas aren’t fully formulated. I need to get better at marketing before I put out ideas I really care about. But eventually the pain of not doing it became greater than the pain of doing it, and then finally I said to myself, ‘Dude, this is stupid, I just need to put it out there.’”

So in 2012, Clear abandoned everything he’d built so far, including his 20,000-person email list, and started from scratch, launching JamesClear.com. His strategy was deceptively simple.

“I was writing every Monday and Thursday,” he said. “That sounds like such a small stupid thing, but for me, having a consistent publishing schedule made a big difference, because I chose a pace that I could sustain. I picked a pace that was slow enough that I had enough time to put together two quality articles per week.”

That meant he was producing about eight articles per month, and of those he could be pretty sure that at least two or three would be extremely high quality. Clear, who had already gotten the hang of guest blogging, would approach the editors at sites with much higher traffic, like Business Insider and Huffington Post, and ask them if they were interested in reprinting his work.

Though the subject matter was new to him, Clear had already launched umpteen other platforms and now had sufficient experience attracting new readers and then converting them into subscribers. His first month brought in 780 unique visitors, and for the next few months he hovered between 5,000 and 20,000. During his eighth month it suddenly jumped up to 35,000 and then began drastically increasing each subsequent month. His email subscribership also saw a similar incline, slow and steady at first before experiencing a steep month-by-month accumulation.

The articles Clear produces typically fall within the self-help genre, specifically the subcategory of self-help that focuses on habit forming. It’s his position that many of our problems and concerns, whether they have to do with health, careers, or personal hygiene, can be ameliorated with the help of straightforward exercises, “life hacks” that, when repeated over and over again, become ingrained, thereby streamlining productivity and efficacy. He then builds on these best practices, adopting his own sort of self-referential nomenclature (always with a helpful hyperlink leading back to his original column on the subject). Sprinkled throughout is a light foundation of science, usually in the form of a citation to a recent study.

For instance, in a recent column about when we slip up and break one of our adopted habits (whether it’s going over your calorie limit or not reaching your daily writing goal, both of which I know well), Clear cites a study published in the European Journal of Social Psychology demonstrating that momentary slip-ups do not necessarily diminish one’s chances of reaching a desirable outcome. He then ties this back to his self-coined aphorisms, most of which long-term readers will be familiar with: “The 2-Minute Rule;” “Improvement by subtracting.” Many of his posts are enhanced with a dab of humble self-deprecation, noting that he, too struggles often with these same habit-changing hurdles.

The web he weaves

Over time, Clear has built a content infrastructure that is awe-inspiring in how it interlinks and connects. Each blog post is just a starting point, and there are constant citation links meant to send one further and further down the rabbit hole, with multiple prompts along the way for the reader to sign up for Clear’s email newsletter. Once he has the reader subscribed, then Clear has a captive audience that he can guide through the content funnel until the person, hopefully, pays for one of his courses.

“I’m a believer of letting people choose whether they get more information about a particular product rather than pushing it on them,” explained Clear. “They get the emails from me, and there will be specific trigger links within the emails. Let’s say I write an article about habits, and there’s a trigger link in there that says something like, ‘If you enjoy this post, I’ve put together a free miniseries on habit formations. If you’d like to get it, click here and I’ll send it your way.’”

Clicking on that link signs up the reader for a second, more-focused set of emails, each offering up free information and articles. It’s only when this new email series ends, after the reader has already qualified himself as an interested customer, that Clear offers him a paid course.

The courses typically cost $49, though Clear plans to raise that price in the near future. “I have customers right now telling me I should charge $99 for it, and usually customers lowball the price they would pay for something.” To scale effectively, Clear will teach the first course live and record it, thereby creating a view-on-demand version that can accommodate an infinite number of customers. He often includes bonus materials and downloadable slides that the customer can review on their own time. He’s experimented with interactive features, like live Q and As. Clear has also become a sought-after speaker and consultant (when I spoke to him, he had four paid speaking gigs in the coming three weeks), though he said he wants to significantly cut down on these in-person meetings to only one per month.

I asked him why, in an age where publishers obsess over social media optimization and Facebook has become a key source of referral traffic, he focuses so much of his effort on email. “I don’t care about email over Facebook or Twitter in respect to the medium itself,” he replied. “What I care about is reaching people, and people pay attention to email more than Facebook or Twitter.” Email, he said, allows for a more one-on-one relationship, one in which it feels to the reader as if you’re speaking directly to her. Also, users are primed to accept that they won’t see every tweet or Facebook post that floats through their feed when they’re not logged on, whereas most people make a genuine effort to at least read the subject line of every email in their inbox. Besides, once the reader is subscribed via email, Clear can use the list to promote his other social channels.

There seems to be only one thing missing from Clear’s line of content offerings: a book. In fact, he recognizes this, and wants to place such a product between the free content and the online courses. At a price point of $20, it could serve as a stepping stone within the content funnel, a way to hook the readers who aren’t quite ready to shell out the $49 for an online course. The only question now is how he publishes it. Through a big New York publisher where he gets 10 percent of each sale in royalties, or should he bypass the traditional route entirely and use his 100,000-strong email list to sell directly to the consumer through something like the Kindle platform? “Both options are open and available to me,” Clear said. “I have a fair number of friends who are bestselling authors and when I talk to them, most of them say I should just self publish. I think I’ll self publish this one, and if it tanks, I can just do a traditional deal for the next one.” Whichever route he chooses, he’s come a long way since he launched a mobile app with no audience to buy it. Now he has an audience. Even better, he knows how to convert it into buyers.