2014 Was a Chaotic Year for Free Speech in the Middle East, North Africa 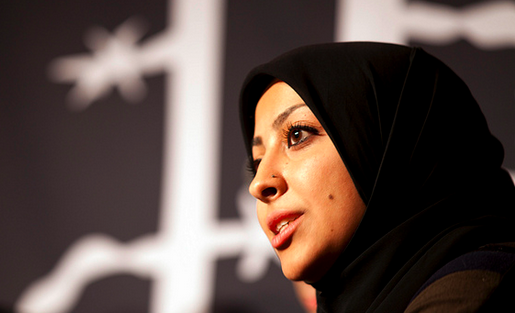 Maryam Al-Khawaja speaking in 2011. Photo by amnestystudent via Flickr (CC BY 2.0)

With the rise of the Islamic State (or “ISIS”) and increasing repression in several countries — including Egypt and Saudi Arabia — 2014 has proven to be a rough year for freedom of expression in the Middle East and North Africa. Here are a few of this year’s big stories:

"2014 has proven to be a rough year for freedom of expression in the Middle East and North Africa. "

The hopes of the so-called Arab Spring were dashed in a number of ways this year as Egypt’s military regime cracked down on fundamental freedoms, including freedom of speech. In the summer, the Egyptian government put forth a call for surveillance equipment, to monitor social media in multiple languages. As Egyptian lawyer Ahmed Ezzat recently wrote, increased surveillance will allow the regime to more closely monitor for blasphemy, political criticism, and issues of morality.

The site 7iber finally caved and applied for a license so it could stay online.

Following 2012 amendments to the country’s Press and Publications Law, Jordan blocked hundreds of websites that failed or refused to apply for media licenses in mid-2013. One popular media and advocacy organization, 7iber, refused to comply and subsequently found themselves blocked. After several attempts to circumvent the ban — including setting up mirror sites at 7iber.net and 7iber.me — the organization gave in late this year and successfully applied for a license. But, they write: “This does not change [7iber’s] position against the Press and Publication Law and other laws that violate freedoms and rights guaranteed by the Jordanian constitution and by international human rights conventions ratified by Jordan, nor is it the end of our endeavor to fight censorship.”

Despite the country’s many gains toward democracy, Tunisia’s bloggers still struggle to express themselves freely. Jabeur Mejri — a blogger who spent time in prison for blasphemy charges and later received death threats — was jailed for eight months beginning in March for allegedly insulting a court clerk. He was released in mid-October.

While Saudi Arabia has never been a beacon of freedom, this year saw an increase in censorship. One publication stated that 3,000 websites related to drug use had been blocked, while another reported that 10,000 Twitter accounts had been “closed” (or blocked). The extremely conservative government also blocked access to the website of the Gulf Center for Human Rights.

Bahrain has continued its crackdown on opposition activists, with little interference from its Western supporters. Prominent Bahraini activist Zainab Al-Khawaja was sentenced to three years in prison for ripping up a photograph of the monarch, while her sister Maryam was sentenced in absentia for allegedly assaulting police officers. Previously imprisoned activist Nabeel Rajab was arrested for a single tweet (above), although Rajab argues that it was actually his speaking tour that prompted the detention.

For more information on digital rights in the Middle East and North Africa, subscribe to Digital Citizen, a bilingual newsletter reporting on the region.

2 responses to “2014 Was a Chaotic Year for Free Speech in the Middle East, North Africa”