How the Women’s Hackathon on Wearables Inspired Students to Lead 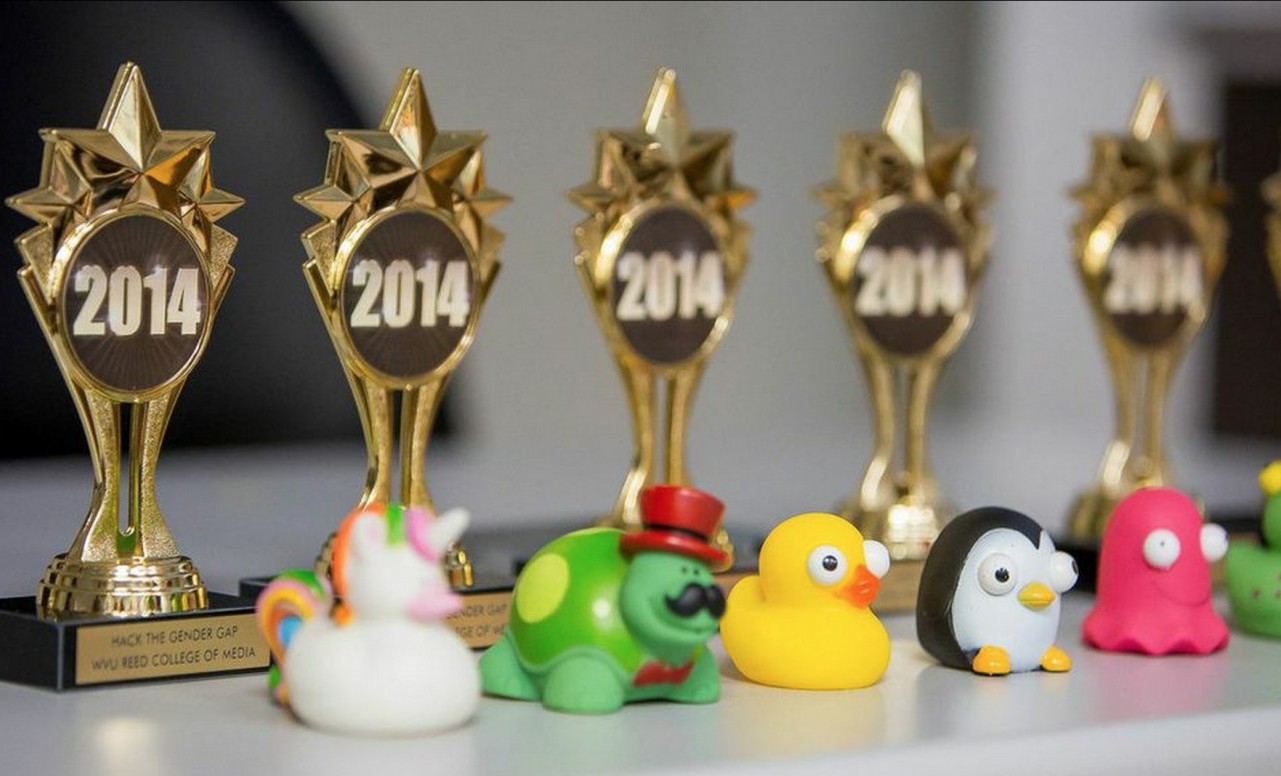 Team mascots are lined up in order of pitch presentations. Photo by David Smith/Reed College of Media.

The results of the Women’s Hackathon on Wearables are in. Co-sponsored by West Virginia University Reed College of Media and PBS MediaShift, this hackathon was a pivotal event for the eight teams who participated in an immersive weekend envisioning a startup use of wearable tech from a women-only perspective.

More than 50 women from WVU and other universities including Penn State, Howard, Syracuse and Carnegie Melon participated in the weekend event that launched with a symposium at Google of women leaders in the technology industry who set a clear tone of assertive ambition for the young women.

"It changed the way I view technology. It made me feel like I have a voice.” -Alise Bundage

“You’re not the next generation of women of wearables,” we said to participants, emphasizing the opportunities for women at the beginning of an emerging market. “You’re the first generation.”

The winning team delivers a fast-paced, 4-minute pitch to the panel of judges and an audience of their competitors. WVU Reed College of Media Dean Maryanne Reed and hackathon participants interact with the women leaders in technology symposium at Google. The symposium kicked off the Hackathon Friday, Oct. 24, 2014. Photo by David Smith/Reed College of Media.

Competition was fierce. Each team delivered an ignite-style pitch to a panel of five judges that featured Lynn Dombrowski, co-founder of STEMPLOY, an initiative to mentor young women in science, technology, engineering and math fields; Brett Carpenter and Brendan Gibat, software engineers for Morgantown company ListHub; Ashley Hardesty Odell, a partner at Bowles Rice LLP; and Michelle O’Connor, an investment manager for WV Jobs Investment Trust. Acknowledging that each team pitched compelling concepts for viable products, the judges struggled to select a winner from ideas that included a hands-free system for journalists to streamline reporting in the field optimized for Google Glass, a bra that conducts regular breast examinations, a fashionable earpiece that sends scheduling reminders and an application young people can use to take a “timeout” from technology.

In the end, judges declared BioBit the winning startup with the most feasible, valuable use case for wearable technology. BioBit is designed as an attachment to the popular fitness wearable, Fitbit, and measures biomarkers crucial to women’s health in real-time. We’d tell you more…but we’re mindful of the judges’ concluding comment to team members to “Patent now!”

Each young woman was handed a toy mascot at the beginning of the weekend and instructed to find their fellow team members. Team “Ghost” started as awkward strangers and ended up as fast friends, co-conspirators and possible business partners with their winning startup pitch.

In keeping with the spirit of the Hackathon — adding women’s absent voices to the technology industry and creating a network for women of wearables — let’s listen in as the team members talk about their experience in their own words:

Let’s start at the beginning. What were your expectations coming into this?

“I thought I was actually going to be coding into a computer. So this was just different. I didn’t know there was going to be this much creativity involved.”  — Alise Bundage, Howard University freshman

How did you tackle this? You got the challenge, you took off racing to find a room, then what?

“We actually were weaving all over the place. We were trying to problem-solve for women and thinking about how time is a big factor in their lives. Valerie must have said a hundred times, ‘It’s back to time, back to time.’ I have so many apps on my phone that require me to type everything in, and I’m even too lazy to delete them. And then were like, wouldn’t it be cool if the information we wanted was just right there. And then we had the idea of partnering with a company that’s already established. It just seems so feasible to us. Like we can do this.”  — Carlee Lammers, WVU senior

“…The moment that it all hit, I wish we could have recorded it or something. We were all connected, it was like ‘this is it!” — Valerie Bennett, WVU senior

“…And it was so cool because every time we got a step closer to our final product, we were all ‘high five,’ yes that’s it! We had these problems within the bigger problem, but every bridge, we crossed.” — Alex Garip

You all are used to working in teams, but what is it like to be in a team made up exclusively of women?

“It was unlike anything I’ve ever done before. We come with these different backgrounds, but we all want to tell the same story.” — Carlee Lammers

“We are all passionate women. Everyone here is a fighter, everybody has dreams laid out and working with other women…it was hard to describe. You automatically felt connected, right off the bat. There wasn’t any awkwardness, where it’s quiet for the first minute. It was just straight into it.” — Valerie Bennett

“I think what’s really cool too is that you can look at this product and say, ‘Yeah this is a woman-first device.’” — Alex Garip

How has this event changed your perception as a woman in the technology industry or the media industry? And what lies ahead?

“Doing something like this, win or lose, we felt so empowered all the way through. There’s not enough of that. People always say, you can do whatever you put your mind to. But this showed me that.” — Carlee Lammers

“It was really cool doing this outside of class and actually implementing everything we’ve learned. That’s what made it so beautiful. This is real, this is happening right now. We solve problems all the time in our daily life, but figuring out a way to not just solve them by yourself, but to work with a group. It taught me how to approach things differently.” — Valerie Bennett

“This conference just made dreams tangible. Ugh, that is so cheesy. Oh that is the cheesiest thing I’ve ever said. But I’ve never been so much a part of something made from scratch. This weekend secured my decision that these are the kind of women I want to be working with in my life. — Alex Garip