Love It or Hate It, Common Core Should Include Journalism Education 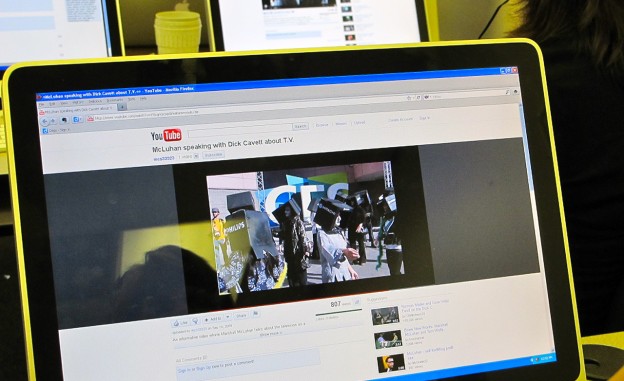 “We have shown how every element of a journalism class can connect to a Common Core standard. There is no better class to teach, practice and prove these skills.” -Sarah Nichols

There are few phrases quite as controversial in K-12 education today as the name of this nationwide initiative. Launched in 2009, Common Core is a set of national standards in mathematics and English language arts/literacy intended to enhance college and career preparedness as well as bring all states in line with international benchmarks. While states still determine the content appropriate for every grade level, Common Core sets skill standards for each grade to help students develop broad critical thinking abilities that will allow them to consistently progress to the next level of learning.

Or so the supporters say. Common Core’s critics claim it is an overreach of federal government, a focus on process to the exclusion of independent thinking or creative alternatives and another example of a “teach to the test” mentality that is devaluing public education.

Amid the controversy, the 43 states (plus the District of Columbia and four territories) that have adopted Common Core are shifting curricula to ensure that new standards are adequately addressed and assessed in K-12 classrooms. Such a shift could be a death knell for courses traditionally considered to be electives, like journalism, as schools reorient on foundational classes that best relate to Common Core skill standards.

It could be — but it shouldn’t be.

Photo by elisasizzle and used here with Creative Commons license.

“Journalism is 21st century learning,” says Sarah Nichols, vice president of the Journalism Education Association (JEA) and a journalism teacher and adviser at Whitney High School in Rocklin, Calif. Nichols has been part of a JEA initiative to help journalism educators show how their courses align with Common Core standards, and says that very little had to be done conceptually.

“We have shown how every element of a journalism class can connect to a Common Core standard,” she says. “There is no better class to teach, practice and prove these skills.”

The “skills” Nichols references are key to creating a strong argument for journalism education under Common Core. Dr. Ann Teberg, an associate professor of education at Whitworth University and member of the K-12 Common Core Standards Review Workgroup for the state of Washington, says Common Core charges schools to gear education toward helping students reach anchor standards in the skill areas of English language arts/literacy and mathematics. An “anchor standard” is defined as “general, cross-disciplinary expectation that must be met for students to be prepared to enter college and workforce training programs ready to succeed.”

In essence, at each grade level, students are expected to be able to perform certain skills related to reading, writing and math. For example, the following are among the anchor standards applied to students in grades 6-12 in relation to their overall writing skills:

These broad anchor standards are refined to develop specific grade-level expectations, but they are not grounded in topic areas. The anchor standards in writing as well as reading and comprehension are applied far beyond English or language arts classes. “Now a science teacher needs to speak to literacy standards,” Teberg says. “It’s literacy in all subject areas.”

Nichols says the focus on skills is a natural fit to the work students are already doing in journalism classes. “The research, critical thinking, writing, editing, the best place to tell that story. This is what we teach in journalism, and this is all Common Core.”

The challenge of assessment

Teberg says that states and districts not only must figure out how to best address the standards in their curriculums, but also how to assess their students’ progress and ensure they are meeting grade-specific goals. Most states are participating in one of two testing programs: the Partnership for Assessment of Readiness for College and Careers or the Smarter Balanced Assessment Consortium. Teachers are also looking for ways to develop course-specific assessment to show how learning proceeds.

That can be a particular challenge for journalism classes, which often feature a wide range of grades and levels of experience. Puyallup High School journalism teacher and Washington JEA president-elect Sandra Coyer says she’s developing an individual plan for each of her journalism students. “I’ll assess their particular progress, documenting through formal and informal observation.”

Nichols says journalism classes have always called for a creative approach to assessment, and Common Core simply calls on the creativity further. “We’re making sure that we’re reflective about how we know if a student has learned something,” she says. “A media classroom is unique and may include multiple grade learners and learning levels. We want to help teachers with that process that is specific to the skills necessary for journalism but that will also help those different learners succeed.”

Planning ahead and a wealth of resources

To meet the challenge of assessment and to reinforce the clear alignment between Common Core initiatives and journalism education, Coyer says she will be using a variety of resources developed by the JEA. “They came together to create a curriculum that not only addresses needs but also shows learning goals and rubrics,” she said. “They’re helping us use Common Core to advocate for our programs.”

Those resources emerged as a result of a JEA project that brought together leaders in journalism education, including high school teachers, college professors, former educators now in the tech sector and more, to contribute expert perspectives on each Common Core standard in English language arts/literacy. Their collaboration generated a comprehensive journalism curriculum that included sample lesson plans, assignments, assessment mechanisms, readings, multimedia elements and more for journalism educators to use in part or full as they saw fit. Paired with each curriculum element was a clear definition of how it connected to Common Core standards.

Nichols says the curriculum is in constant revision and renewal, as the organization seeks to meet all types of learners as well as remain responsive to the changing industry. “We’re developing a professional advisory board for an outside perspective to be sure we’re aligned with what students need to know,” she says.

The JEA is not alone in providing resources to educators attempting to make the case for Common Core relevancy. Digital Skills Workshop, a project funded by the Wayne Morse Center for Law and Politics and the School of Journalism & Communication at the University of Oregon, is a series of free learning modules grounded in journalism practices and developed to address the competencies of Common Core. The project was piloted at Roosevelt High School in Portland, Oregon, and the student work and teacher takeaways are available with the lesson plans on the workshop site.

Stays or goes, a case remains for journalism education

While a majority of states has signed on to Common Core, it is by no means universally embraced. Several states are revisiting that decision and grassroots campaigns to reject Common Core and the funding that comes with it are gaining some traction.

Most of the arguments against the program revolve around its method of application. The significance Common Core places on critical thinking, the ability to engage with nonfiction texts and basic communication skills — all essential elements in journalism education — still find a receptive audience and help make the case for continuing journalism education in public schools.

“I was initially concerned about journalism education getting pushed aside when I first heard about Common Core, but then we saw the requirements and it’s everything journalism — writing, editing, literacy,” Coyer says. “Every single student should be taking journalism. Every single one.”

One response to “Love It or Hate It, Common Core Should Include Journalism Education”