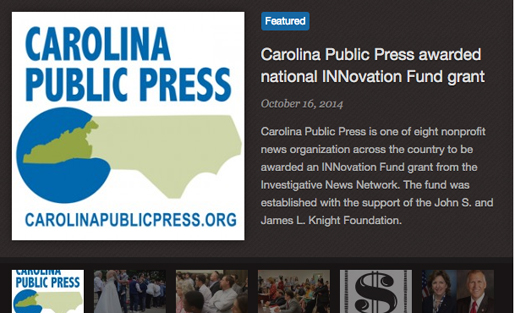 How do non-profit newsrooms become sustainable in the digital age? That’s the tricky question the INNovation Fund seeks to address by funding ideas that spur experimentation and innovation in non-profit newsrooms. The Investigative News Network has announced eight winners of the second round of its INNovation Fund, a partnership between the Knight Foundation and INN.

The eight projects, which range from a film festival to a mobile app, have been awarded a total of $226,020. Each project will receive $35,000 or less. The winners include 100Reporters, Carolina Public Press, Citizens Campaign, High Country News, inewsource, The Lens, the Wisconsin Center for Investigative Journalism, and WKAR-AM/FM/TV. (You can read more about their projects below.)

"Whether it's a speaker’s bureau, a film festival or a social network for content syndication, each of these new projects has the potential to generate impact and benefit for the entire non-profit news sector." -Kevin Davis

“Whether its a speaker’s bureau, a film festival or a social network for content syndication, each of these new projects has the potential to generate impact and benefit for the entire nonprofit news sector,” Kevin Davis, CEO of INN, said in a statement.

This is the second of multiple rounds of the competition. The first round’s winners, announced in April, received a total of $236,280 in funding. Applications for the next round will open March 2.

Here’s more about this round’s winners:

Citizens Campaign — $35,000 to launch a Community Day in Paterson, N.J. to heighten interest in the Paterson Press, their local online investigative news outlet.

inewsource — $28,404 to create one “virtual voice” content syndication and distribution program among up to 90 community news outlets in the San Diego area.

The Lens — $7,500 to expand a Speakers Bureau to bring the Lens reporters face-to-face with current and potential subscribers in New Orleans.

The Wisconsin Center for Investigative Journalism — $35,000 to organize a series of “Art + Journalism” forums/fundraisers statewide, showcasing their stories on water issues with representative sculpture which will be auctioned.

WKAR-AM/FM/TV — $30,116 to develop a mobile app around their long-running ‘Off the Record’ public affairs show to attract more viewers ages 18-29.