Tablet Magazines Are Lousy, But J-Schools Can Make Them Better 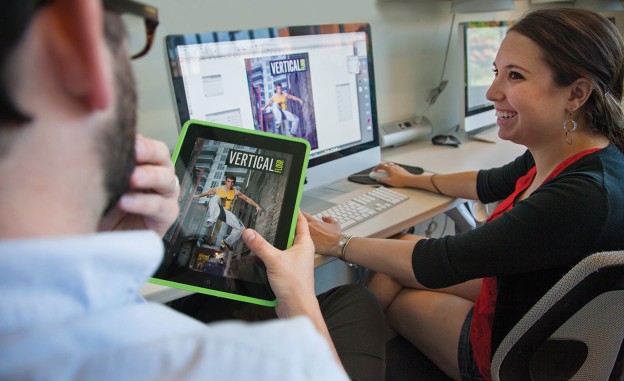 The Apple iPad and my teaching career launched at around the same time, both full of mystery and potential.

At my interview, just a few weeks after the iPad’s launch, I spoke a lot about the potential of tablet magazines. Publishers would not make the same mistake with the tablet as they had with the Internet, I believed. The tablet’s familiar rectangle would be a comfort to digital-averse magazine editors while the interface could lure new readers, advertisers and their accompanying revenue streams with fresh, innovative approaches to storytelling.

"It’s an environment where a student in a classroom is operating with a similar toolset as a publisher in skyscraper in New York City." - Joe Zeff

I hope I am a better teacher than I am a prognosticator.

Though Apple claims it has sold more than 200 million iPads since 2010, not many of those users subscribe to magazines. Replica digital magazines accounted for only 3.8 percent of total paid circulation in the first half of 2014, according to the Alliance for Audited Media. To put this in perspective: National Geographic won the National Magazine Award for best tablet magazine this year. The Geographic’s paid print circulation is 3.5 million. Circulation for the tablet edition: 164,408. The “best” the industry has to offer amounts to less than 5 percent of paid circulation. (Blame the AAM, in part, for the industry’s reliance on tedious replica apps; they are the only versions counted in a publication’s rate base, which help determine its ad rates.)

Photo by ASUCronkite on Flickr and used here with Creative Commons license.

While magazines are still producing tablet issues, they haven’t saved the industry like we hoped. But that doesn’t stop journalism schools from making them a focal point in the curriculum. Students at Drake, Northwestern, Kent State, University of North Carolina, Marist, the University of Arizona and several other schools create content for the tablet sometime during their college career. At Syracuse University, the Magazine Department was the first in the Newhouse School to incorporate tablets in its curriculum, beginning in 2011. Students in magazine editing classes critique existing magazine apps and pitch ideas for new ones. Graduate students create a wholly new tablet magazine every year as part of their capstone experience. Elsewhere in the curriculum, students make digital editorial products as part of collaborative journalism classes.

These kinds of classes require special software, new equipment, time away from other skills and faculty buy-in. The traditional mandate for journalism schools is to train students for the profession. But by teaching tablet editorial, j-schools are preparing students for what could be (and should be) in a few years, in addition to what is.

Giving students room to experiment may even help the publishing industry, said Joe Zeff, a longtime tablet magazine designer and the executive creative director of ScrollMotion, a mobile developer. “It’s an environment where a student in a classroom is operating with a similar toolset as a publisher in skyscraper in New York City,” he said. “The playing field is flat. Students can put forth great ideas that can be tested and implemented without the barriers to entry that existed in the past.”

Kevin Lerner, an assistant professor at Marist College, also considers tablets a potential for classroom innovation ahead of industry. “Doing a tablet magazine allows a chance to be more experimental than the industry can be,” Lerner said in a recent interview. “I don’t think the big companies are willing to do much that is really different until they know whether it’s going to work financially. We can use classrooms as laboratories to try and figure out new and better ways to do these things.”

Lerner will teach a tablet magazine production class for the first time this semester. The industry’s struggles with the platform creates an opportunity for J-Schools to reconsider their traditional role in the profession, Lerner said. “The idea that we as educators are training students for entry-level jobs in industry is a 40-year-old idea. There is no one route to that anymore,” he said. “[Students] need to be flexible and creative thinkers when they’re trying to figure out how to get their stories across and what the best ways to present those stories are.”

Students in Kent State University Associate Professor Jacqueline Marino’s class have experimented with a variety of software packages to produce mobile and tablet content in class, including iBooks Author, Creatavist and Mag+. Part of the tablet’s appeal for Marino is the cost: It’s cheaper to develop digital content than it is to print a magazine. And while tablets may not generate big revenue for industry, the audience increasingly consumes magazine content online or on mobile devices.

Photo by Romain Guy on Flickr and used here with Creative Commons license.

“The tablet’s not performing very well right now for magazines, but digital is growing. It’s growing slowly, but it is growing. We can’t say the same for print subscriptions right now,” she said in a recent interview. “The print magazine itself is not the center, but the magazine brand. If we teach them how to do that on multiple platforms, that’s going to make them successful. The tablet’s just one part of that.”

Working on a magazine tablet forces magazine students out of their comfort zone of traditional longform narrative, Marino added. Digital editions require much more than just words. Making digital products in class encourages students to create different kinds of content in a collaborative environment. While not everyone is destined to make viral videos or social-media friendly interactive graphics, these kind of projects demand a basic digital competency. “Even knowing just a little bit will make you a better collaborator with people who know a lot. It’ll make for a better product,” she said.

Moving Beyond the Tablet

But as technology moves on, so must curriculum. Jeff Inman, whose class at Drake University’s School of Journalism and Mass Communication produced one of the first student tablet magazines in December 2010, told me he’s considering leaving the device behind for the platform agnostic HTML5. “We can get the same learning objectives out of a responsive site that we have been getting out of a tablet,” he said. “We get it with fewer technical hurdles and more devices. We get an even wider audience.

“It’s much easier and much better to do a responsive site.”