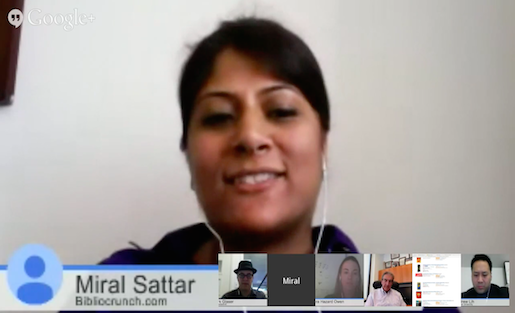 Miral Sattar, CEO of Bibliocrunch, joined this week's podcast and talked about how self-published authors do well on Amazon

Amazon is the world’s largest online retailer, a one-stop shop for books, streaming movies, and even toilet paper. And they became the world’s largest online retailer with a mix of convenient delivery and low prices that beat the competition. For authors, this has been a mixed bag — Amazon connects consumers with books that don’t have wide distribution, but the discount pricing that’s become Amazon’s hallmark can cut so deep it’s leaving authors and publishers in the red. The online retailer is currently in pricing disputes with Disney over DVD prices, and with German press Bonnier and Hachette — the fourth largest book publishers in the U.S. Hachette, in particular, has been in a battle with Amazon for months, while Amazon makes it more difficult to get their books.

On this week’s podcast we discuss what Amazon’s dominance means for consumers, authors and the book business as a whole. Special guests include Laura Hazard Owen from GigaOm, Miral Sattar from Bibliocrunch, and Joseph Tabacco, an antitrust litigation partner at Berman DeValerio. Plus, we’ll have regular Andrew Lih from American University, with MediaShift’s Mark Glaser hosting and Fannie Cohen producing.

Joseph Tobacco is the founder of Berman DeValerio’s San Francisco office, actively litigates antitrust, securities fraud, commercial high tech and intellectual property matters. Mr. Tabacco is a primary point of contact for many of Berman DeValerio’s institutional clients, including the California State Teachers’ Retirement System, the California Public Employees’ Retirement System and the Offices of the Attorneys General of Michigan and other states.

Laura Hazard Owen is the news editor and digital publishing reporter at Gigaom, a website on emerging technology. She was previously a staff writer at paidContent and, before that, the editor of Publishing Trends. She lives in New York.

Miral Sattar is the CEO & founder of BiblioCrunch.com. She is a new media entrepreneur who has worked in the media industry for 11 years. Her mission is simple – to innovate the publishing industry with technology. She is also a contributor at TIME.

As Amazon has disputes with publishers, authors are caught in the middle, hurt both by Amazon’s negotiation tactics, and race-to-the-bottom pricing. To hasten things, Amazon has gone back to their old Macmillan playbook, disabling pre-orders for Hachette and Disney titles, and not keeping titles in stock, causing unusually slow shipping from a site known for its expediency. But despite these detrimental sanctions, Hachette has vowed to not back down until an agreement is reached.  Authors from Hachette and Bonnier have made statements railing against the harmful tactics Amazon is deploying to sway negotiations. Over 900 Hachette authors signed an open letter calling out the site for blocking sales and inviting the public to email Jeff Bezos expressing their concern. Similarly, 1,100 Bonnier authors followed suit with their own protest.

While any retailer — online or brick-and-mortar — is allowed to price and stock their store however they like, many in the book business feel that Amazon is changing the game. Amazon takes the usual 30% retailers’ fee off the top, plus an additional “co op promotional fee.” Lowering price points leaves less profit for publishers, which ultimately can hurt the author. But has Amazon broken anti-trust rules because of its dominance?  “They are getting very close to the line,” antitrust lawyer Joseph Tabacco told Bloomberg. Tabacco, who will be joining our discussion, has worked on federal monopoly and price-fixing cases against mining, electronics and pharmaceutical companies in the past.