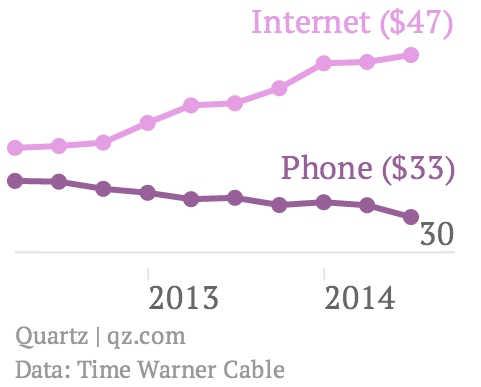 There’s something upside-down about broadband Internet service in the U.S., the country that helped invent the Internet. Americans in cities are paying more for slower Internet access — both at home and on mobile — than other parts of the developed world, according to a report last year from New America Foundation. And recently, Zach Seward at Quartz found that Time Warner Cable (which Comcast is trying to buy out) has steadily increased broadband prices in recent years as TV and phone service prices have dropped. The demand for high speed Internet at home is growing as people forfeit their cable packages for streaming services. Meanwhile, Facebook’s Mark Zuckerberg has pledged that “connectivity is a human right,” and his Internet.org non-profit arm is planning to offer free mobile broadband to the developing world.

On this week’s podcast, we’ll discuss rising Internet costs and the chances for free services with special guests Zach Seward from Quartz and David Meyer from GigaOm. Plus, we’ll have regulars Alex Leo from Newsweek and Andrew Lih from American University, with MediaShift’s Mark Glaser hosting and Fannie Cohen producing.

Alex Leois a writer and technologist living in New York City. She is an editor-at-large for Newsweek, where she was previously the head of product. Before that she was the head of product for Reuters.com, a senior editor at The Huffington Post and an associate producer at ABC News. She was named one of Forbes 30 Under 30 in 2012 and chosen by NBC New York as one of the top twenty people to follow on Twitter. Her work has appeared on The Atlantic Wire, Elle, Jezebel, CNBC, The Hairpin, Reuters, and more, as well as in the play “Love, Loss and What I Wore.”

David Meyer is a senior writer for technology blog Gigaom, mainly focusing on Europe but also covering privacy and other aspects of society affected by technological change. He has written about mobile technology for 8 years and, originally coming from South Africa, he has a keen interest in technology in emerging market.

Zach Seward is senior editor of Quartz, where he focuses on new forms of storytelling and leads a group of journalists with backgrounds in data wrangling, programming, and interaction design. He previously worked at The Wall Street Journal, first as a reporter covering education and health, then as the editor of outreach and social media. Before that, he helped launch the Nieman Journalism Lab at Harvard, covering the media industry. He also currently teaches digital journalism at NYU.

The pressure to improve and grow networks is coming down on providers — Time Warner has promised their customers faster speeds as other high speed Internet technologies like FiOS and Google Fiber are breaking into what had been cable- and satellite-dominated territory. Time Warner and Comcast both started as cable TV companies that grew into the phone and Internet business. The growing demand for high speed Internet at home makes Time Warner a desirable acquisition for Comcast, as Internet bills for Time Warner customers have gone up 20% in the last 2 years, while the company has added 336,000 Internet subscribers this year.

And the U.S. trend is counter to prices in other parts of the world, according to a report from New America Foundation, which found that the best price for higher 150Mps speeds at home was $130/month from Verizon FiOS, while most comparable plans in other cities around the globe were about $50/month. And the cheapest mobile broadband price in the U.S. last year was $30/month from T-Mobile, which is twice what people pay in London at $15/month from T-Mobile. “It costs more to purchase 2 GB of data in a U.S. city than it does in any of the cities surveyed in Europe,” according to the New America Foundation researchers.

Meanwhile Internet.org announced free, limited mobile broadband in Zambia, with plans to expand to more developing countries. But there are some downsides: New users must create Facebook accounts that act as portals to the web. If users want to venture beyond the Zuckerberg-free zone and into the whole of the internet, you’ve got to pay. This makes Facebook a broker between the developing world and the open Internet, one that can set prices for visiting certain sites or could undermine privacy, according to GigaOm’s David Meyer. Similarly, Google has plans to connect some of the two-thirds of the world’s population who remain offline, spending more than $1 billion on low-orbiting satellites, and a balloon-based delivery system called Project Loon.

What can average Americans do to push for lower broadband bills? Can regulatory oversight help or is it toothless? And can Facebook and Google ride in to the rescue are do they have too many strings attached?

One response to “Mediatwits #126: Broadband Internet Costs Rising; Zuckerberg to the Rescue?”