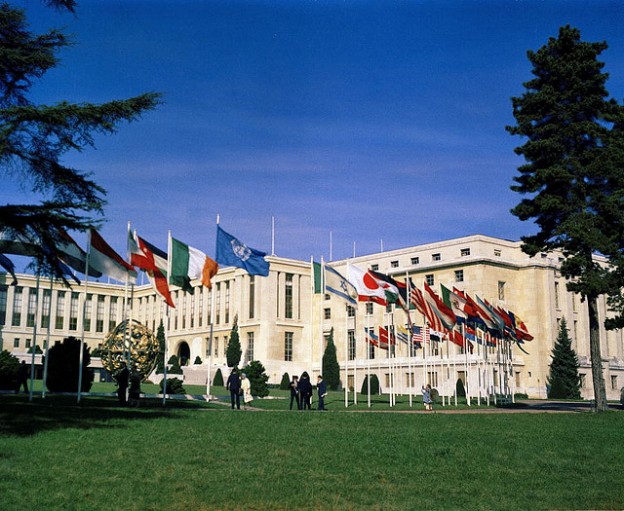 The UN Palais des Nations in Geneva. Photo courtesy of the United Nations and used here under Creative Commons license.

The delegates, journalists and observers gathered at the recent meeting of the United Nations Human Rights Council were focused on a noble purpose: promoting freedom of the press and the security of journalists worldwide.

But at the same time they were at a loss to answer one basic question: Why is violence against the press increasing despite years of efforts to curtail it?

"Journalists cannot wait for governments to heed the call of the UN and take action, while editors and reporters are being killed, kidnapped, beaten, threatened, sued, hacked or spied upon."

In their interventions at the meeting, national representatives talked about “political will,” a very useful cliché for useless statements. On the opposing side, journalists and activists demanded “real political action” to stand up to attacks against the press. Both sides seemed to be talking past each other.

A night view of the Palais des Nations, the seat of the United Nations in Geneva, Switzerland. United Nations photo, used here with Creative Commons license.

Such a lofty setting, the Palace of Nations in Geneva, was far removed from the realities that journalists face all over the world. In 2012, the United Nations Education, Science and Culture Organization (UNESCO) summoned representatives from the media and nongovernmental organizations to launch a “Plan of Action” that would produce protection mechanisms for journalists around the world. Two years later, UNESCO deputy director, Getachew Engida, was candidly admitting that the plan is still “only on paper.”

Meanwhile, a journalist is killed somewhere in the world every 13 days.

(Editor’s note: After this piece was written, news spread of a video showing photojournalist James Foley being beheaded by Islamic militants.)

Most of the journalists killed (two out of three) are targeted outright, meaning they’re not victims of a crossfire, according to figures presented at the council. These aggressions are then followed by near-total impunity.

A Lack of Enforcement

Later, at a panel with Frank LaRue, the UN’s outgoing Special Rapporteur for Freedom of Expression, I realized that one of the obstacles to achieving better protection for journalists is the lack of follow-up to determine whether international efforts are successful.

I saw it firsthand in Mexico. LaRue spent a good deal of his tenure promoting journalist security in my country. In response, the Mexican government created a protection mechanism for journalists at risk and a special prosecutor for crimes against the press. At least for the UN, it was mission accomplished. But the protection mechanism and the prosecution of criminals who attack the press have proved inadequate and inefficient.

Even with these two institutions, which have been working to improve the situation for two years now, attacks against journalists are on the rise. Since the UN has to rely on each country’s “good will” to punish attacks in the press, but has no means of enforcement, activists have been prodding the organization to “name and shame” those governments that refuse to enforce the protection of journalists.

However, journalists and media organizations cannot wait for governments to heed the call of the UN and take action, while editors and reporters are being killed, kidnapped, beaten, threatened, sued, hacked or spied upon. Nor can we expect a “one-size-fits-all” solution.

A screenshot of the map created by Jorge Luis Sierra to identify violence against journalists.

International observers monitoring the situation of the press around the world need better tools in order to monitor the conditions in which journalists work. They also need a more accurate way to diagnose the problems, and to determine whether national governments are keeping their commitments to protect a free press.

Such a tool is being developed in Mexico by the International Center for Journalists and Freedom House. My colleague, ICFJ Knight International Journalism Fellowships Director (and former Knight Fellow) Jorge Luis Sierra created a map which tracks attacks on journalists by type of aggression (physical, psychological, digital or legal), by type of attacker or type of news the journalist is covering.

The wealth of data that has emerged since the map was launched in 2012 is allowing us to produce a better diagnosis of the environment faced by the press in Mexico. We can put a microscope on the regional dynamics of attacks against journalists within Mexico and the way they evolve and change over time.

This analysis allows journalists anywhere in the country to have a better sense of the most immediate dangers they face, by knowing the nature and characteristics of the aggressions in their regions. This way, they can develop protection plans and protocols that are closer to their own realities.

As an ICFJ Knight International Journalism Fellow, one of my projects is to analyze the data produced by this map with an eye toward the development of better security protocols for journalists, protocols that take into account the regional dynamics of attacks against the press. The data collected so far points to urgent needs for protection in several regions of Mexico. Our objective is to have the map evolve into a tool that will allow reporters and editors to get a better picture of their security.

I’ll talk more about how we plan to use the data in future blog posts, but for now, we can all use the tool to see a snapshot of attacks against journalists in Mexico — and actually do something about it.

Correction: A previous version of this piece included an editor’s note that mentioned an incorrect date for the meetings in Geneva.

Javier Garza is an ICFJ Knight International Journalism Fellow based in Mexico City. He focuses on digital security for journalists.