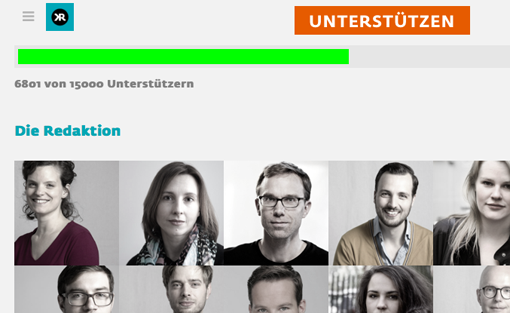 Krautreporter has kicked off a crowdfunding campaign in Germany to build a site for long-form journalism.

At first it seems like a playful (and mildly insulting) term, but the cause is serious: German project “Krautreporter” aims to be the country’s biggest crowdfunding campaign in journalism ever.

The funding phase has now been running for three weeks. The goal is to find 15,000 people who commit to paying 60 Euros ($80) a year. I’m part of a group of roughly 30 writers, nearly all of whom have been working for the country’s most prestigious newspapers and magazines. Here’s an insider’s view of the campaign and our lessons learned so far.

"We wanted to build a brand that is made by journalists who are accessible, who open their notebooks for the readers, and who listen to their needs."

First off, we felt that there are too many websites that are not fulfilling readers’ needs and which are just seeing people as a way to get more clicks and banner revenues.

So the idea was to build a site for long-form journalism with great articles and no ads, instead supported by subscriptions only. We wanted to build that one specific place that people can regularly turn to, in order to get more context for current events and exceptional stories to read. And we wanted to build a brand that is known for relevance and surprises, made by journalists who are accessible, who open their notebooks for the readers, and who listen to their needs.

After a great start, with lots of media attention and several thousands of signups, the project lost a bit of its traction. Here’s how we dealt with criticism, pivoted, and how we tried to get the traction back. Even though there are some Germany-specific implications, this hopefully works as an overview of how to deal with similar situations in many other countries.

Coming up with a strong sales proposition

We had some ideas in mind for a sales pitch. During the campaign, we found out that some ideas worked and others didn’t. Involving the supporters, creating a sense of community (with the slogan: “You are the crowd, we are the reporters, together we are Krautreporter”) and involving them in surveys and in proposing topics made people more communicative and supportive within their networks. Also, it’s important to try different approaches. While for some people the sense of being part of something is enough, others need specific examples of stories and writers’ strengths. People outside the media bubble care way less about names than about topics.

creating a diverse field of writers and editors

At the beginning of the campaign, we had just six women on board in a group of 22. But we didn’t plan this — at some point, when we talked to potential writers, we had way more women in the group. And we have more women behind the scenes, who are involved in other commitments right now and who will publicly join the team after the campaign’s success. Still, our lesson was: Pay attention to being as diverse as possible.

The current website, www.krautreporter.de, is set up on the same crowdfunding platform an earlier version was on before. Therefore programming and re-programming it wasn’t easy. We experienced some limitations in terms of showing all the content we produced during the campaign, for example the blog posts with the portraits of the writers and ideas for upcoming articles. We learned that we have to make this information much more accessible.

Why we’ll still do it

As of now, we’ve got 10 days left, and we’re short about 8,000 subscribers. Still, we’re convinced we’ll succeed — and we’re proving there’s already about 400,000 Euros in the German market that’s ready for an independent journalism project like this, which can be seen as an achievement.

Why the optimism? Well, first off, there’s the team. Even though there are some big-shot names in German journalism involved, the atmosphere behind the scenes is also exceptional. Discussions lead to results fast. Second, we feel the time is right, especially in the German market. Here, it’s time for more bottom-up innovation and new ambitious projects. It’s not about being led by huge media publishing companies (who have a better market position in German than in the US, for example, due to their nationwide branding). And, we are still convinced of the concept of building one place that puts your search to an end, because it guarantees you great long-form stories every day.

There’s still a great sense of being able to succeed, maybe also with your help. Please support independent journalism here. Here’s our FAQ.