What I Learned About Crowdfunding From Peruvian Chicken 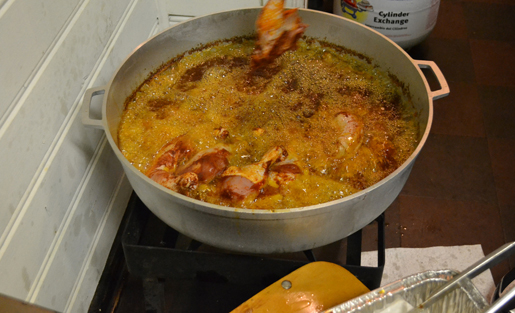 Pollada photo by BKL and used here via the Creative Commons license.

There’s a tradition in Peru called the pollada – literally, a chicken party. These parties perform a very important social function. Say I’m about to have a child and I’m worried about how I’m going to pay education or health care bills. I hold a pollada to raise money by inviting friends and family around for chicken and beers, and selling tickets to the event. The tickets are usually priced fairly highly. The friends who come to my party are willing to pay more than they would normally, because they know they’re contributing to my family’s welfare. Together, we fund the future of my family’s education. And we eat. And we bond. We form our own little crowd.

Just like web-based crowdfunding, the pollada is a clever framing of the process of bringing people together to collaborate on a project. Just like a public crowdfunding campaign, the high level of mutual visibility at a pollada — we’re contributing (and partying) side by side with each other — is critical to its success. That mutual visibility breaks down “pluralistic ignorance”, the anxiety that we’re acting alone. It reinforces our sense of membership and produces the social benefits associated with belonging. One of the best explanations of these benefits is provided by Benkler and Nissenbaum’s work on commons-based peer production. Crowdfunding and the pollada most clearly convey what they call Cluster III benefits (benevolence, charity, generosity, altruism) and Cluster IV benefits (sociability, camaraderie, friendship, cooperation, civic virtue).

So the pollada is an important reminder that mutual awareness is an essential aspect of crowdfunding. It is one of the few characteristics of crowdfunding that fundamentally differentiates it from individuated fundraising. Every website that includes a donation button is not a crowdfunding website, because you can’t form a crowd in which the members are entirely invisible to each other. Members may be anonymous, their locations may be dispersed or unknown, but their co-presence must be evident. A pollada is not a pollada if we’re all enjoying chicken on our own.

I learned about the pollada this past week when I visited Peru with some colleagues from MIT, and used it as a way to contextualize crowdfunding in two different talks I gave to Intercorp’s new Innovation Lab and HASTAC 2014 in Lima. I used it to make the argument that crowdfunding is a process that is rooted in collaborative practices that are common across cultures, and that everything we know about making these practices effective is the raw material of great crowdfunding. For a Peruvian audience, the pollada was a familiar practice that made crowdfunding — still a relatively new and untested phenomenon in the country — immediately intuitive. For non-Peruvians, the comparison served to demonstrate the array of socio-cultural precedents that exist for crowdfunding.

So if the foundations of crowdfunding are deeply rooted, what does that tell us about the future evolution of crowdfunding? What do we know about the way that societies typically organize themselves that might apply to crowdfunding? At Intercorp I argued that there are three key trends emerging in crowdfunding, each of which presents different opportunities for project owners, for platforms, for donors large and small, and for organizations.

Whereas sites like Kickstarter will let a big range of projects all happen in one place — from films to video games to technology — sometimes you need to connect to people with particular expertise or interest. For example, if you want to attract support for a high-level scientific project, you could use a site like Experiment to reach the scientific community. Or perhaps you want to reach a niche interest group such as health care. Nyaya Health funds medical care for patients in Nepal, seeking funding from around the world. Or perhaps you want to create a public or community service, a process that may require many more steps and legal structures than conventional crowdfunding provides. As I’ve written about frequently on this site and elsewhere, new civic crowdfunding platforms have emerged to support complex public-private projects like community centers, bikeshare schemes, and public parks. So what is the purpose of specialization? It is an opportunity to isolate and reach a very specific audience.

Organizations in countries outside the US and Europe are making their own platforms. Why? Because local circumstances really matter. For all the apparent ability of the Internet to bridge geographic boundaries, a lot of crowdfunding is actually pretty local. There are critical issues like currency and language. But there’s also the challenge of dispersed community building. You need to be able to build a community for your projects, and that’s easier to do if the platform and the community are in a relatively small geographic area. My own research has found that civic crowdfunding campaigns are much more likely to occur in cities where platforms are headquartered. And there are some amazing local crowdfunding examples already. Catarse, from Brazil, was the first large-scale crowdfunding platform to open source their code. As a result of that — and their talented developers — they’ve been forked by 10 platforms in the US and elsewhere, such as LittleBigMoney from Colombia, which supports social impact businesses. What this localization of platforms provides is an opportunity to build with a very specific geographic community in mind and to frame the process in a way that is locally intuitive. In Peru, for instance, a pollada-inspired metaphor might seem like a better fit than the “struggling artist” paradigm that is common to Kickstarter.

Foundations, corporations and governments have a lot of experience of and need for fundraising, and now they’re starting to engage with crowdfunding. I described four models of engagement for organizations with respect to crowdfunding: to be a project promoter, and run projects, to be a curator, and highlight projects that support your goals, to be an investor, and help finance projects directly, or to be a platform, and own the whole process. Each different mode carries with it very different risks and potential rewards, and organizations from startups to municipal governments are experimenting with all of them. This institutionalization of the process is important in that it’s bringing a a lot of new people to the crowdfunding table — to the pollada. And it’s creating new partnerships that cross lines of organizational type, mission and discipline. Those partnerships increase the range and scale of projects that can be crowdfunded dramatically, and hopefully will help recover and regenerate the potential for the public, private and community sectors to work together. Because the best pollada is one to which everyone is invited.

3 responses to “What I Learned About Crowdfunding From Peruvian Chicken”