Social Media Editor a Dead End in Newsrooms? Not for HuffPost’s Kerstin Shamberg 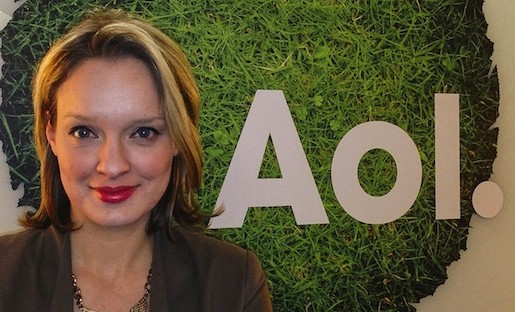 You might hear that the career path of a social media editor is shaky at best — nothing is guaranteed, no job is safe and a journalist working in social could wind up in marketing with a snap of the finger.

Of course, the cream rises to the top, and some of these social media editors land gigs at stellar publications and slowly move up through the ranks. But what does that next step look like?

“I was really ready to evolve beyond a point where I was deeply steeped in social. Living, breathing social. I came to a point where I didn’t need that anymore.”" -Kerstin Shamberg

As Rob Fishman wrote in a 2013 BuzzFeed article, “Social media jobs, once much-vaunted, are now frequently regarded with skepticism, and even contempt … Many of the original crop of social media editors have grown up or out of the profession.”

Kerstin Shamberg is the director of strategic partnerships and audience development at the Huffington Post, and she is what I would consider a social media success story. I had the pleasure of meeting with her on a March afternoon in Chicago, where she works out of the AOL office, to learn more about what she does and how she got there.

Rising to the Top

In 2010, Shamberg moved from Chicago to New York City, where she landed a part-time internship with HuffPost’s public relations department. A few months later, Shamberg became one of Arianna Huffington’s associate editors, a role with a wide array of responsibilities — one of which was helping Huffington manage her online presence.

“I really had no experience with social media, aside from my own Facebook page, a pathetic Twitter account and a MySpace back in the day,” Shamberg said.

Shamberg learned on the job, and communicating with a digital audience quickly became something she was very good at — so good, in fact, that she moved on to be a social media editor for HuffPost. She was put in charge of growing the company’s Twitter account, training editors and working on the social dashboard — “a homegrown tool,” as Shamberg describes it. This dashboard is built into the CMS, and it allows editors to publish and schedule posts to social platforms.

When Shamberg stepped up to the senior social media editor role, she continued to improve the social dashboard and train staffers on best practices, while also juggling even more tasks: managing social strategies for the 50+ verticals, revamping email newsletters, handling external relationships with Twitter, Facebook, etc., working on product development and so much more.

Often, there comes a time when social media editors begin to feel burnt out. The demands of the job are high, and it can be stressful to constantly have an eye on what people are saying and sharing.

“I think anyone who is doing this will probably tell you that at some point, they want to do something else,” said Shamberg. “I can see a lot of people getting to the point where they say, ‘OK, been there, done that.’”

There are certainly examples of such career changes: Anthony De Rosa went from Reuters’ social media editor to Circa’s editor-in-chief. Mandy Jenkins, an ex-HuffPoster, became the managing editor for the now-extinct Digital First Media’s Project Thunderdome — she blogged about how it felt to leave the “social media jam” behind.

Shamberg was also ready for something different, as well as a move back to the Midwest. She and her husband returned to Chicago in the fall of 2013, finally closer to family. She remained an essential part of the HuffPost team and worked from the AOL Chicago office, where her role gradually began to change.

“I was really ready to evolve beyond a point where I was deeply steeped in social. Living, breathing social,” she said. “I came to a point where I didn’t need that anymore.”

Her managers recognized her ability to manage external relations with Facebook, Twitter and other sites, and they believed she represented HuffPost very well. Three months after moving back to Chicago, Shamberg officially became the director of strategic partnerships and audience development.

Now, Shamberg splits her time between a home office and the AOL Chicago office, and she also flies back to NYC every six weeks for face time with colleagues. She said that one of the luxuries of working for an Internet company is having the ability to do your job from anywhere.

At the AOL Chicago office, Shamberg is constantly checking her inbox. “I’m a slave to email,” she said.

“For me, this was a good progression, especially as I want more work-life balance. I’m 30 now. I need to focus on my family,” Shamberg said. “I just couldn’t be the person on-call all the time anymore.”

Although every day is different, Shamberg’s current role is slightly more predictable than the 24/7 lifestyle of a social media editor. She wears many hats, but she’s primarily overseeing and expanding HuffPost’s traffic content and social partnerships. She’s still smoothing out any kinks with the social media dashboard, as well as communicating between the editorial and technology teams. A native of Germany, Shamberg is also able to help HuffPost’s international verticals — she works very closely with HuffPost Germany. It’s a perfect fit for her.

The best social media editors are the ones who make a difference in their newsrooms. Today’s young journalists, fresh out of J-school, are almost always fully equipped with digital skills. They know how to tweet, blog and curate. They know how to watch for potentially viral content, and they know how to stay on top of the latest news.

But, at a certain point, a social media editor has to have genuine passion and talent in order to thrive at a media organization — just look at Scott Kleinberg, Rubina Fillion, Michael Roston and Stacey Leasca.

Shamberg certainly has that necessary drive to succeed, which is how she has thrived at HuffPost for so long. She chalks much of it up to confidence and humility.

“It can be intimidating tweeting to 4 million people,” she said. “You have to understand the gravity of that. Don’t take it lightly. Don’t let it hold you back.”

Another valued skill, Shamberg said, is the ability to express yourself in both a concise and enticing way. On Twitter, you have a limit, but it’s all about what you do with those 140 characters. The top social media editors know how to push content and create conversation with a single sentence.

“Being able to interact with people is huge,” Shamberg said. “You have to know when to engage and when to just back off.”

It’s also crucial to have a basic understanding of a wide variety of topics. Shamberg said she has to know a little bit about the Kardashians and a little bit about Ukraine — but she also has to balance everything in a smart, creative way.

Above all else, the people who thrive in a company are the ones with a heart for what they’re doing, like Shamberg. She believes in the Huffington Post’s mission, and she believes in what she does.

Perhaps social media isn’t a dead end, after all.

One response to “Social Media Editor a Dead End in Newsrooms? Not for HuffPost’s Kerstin Shamberg”