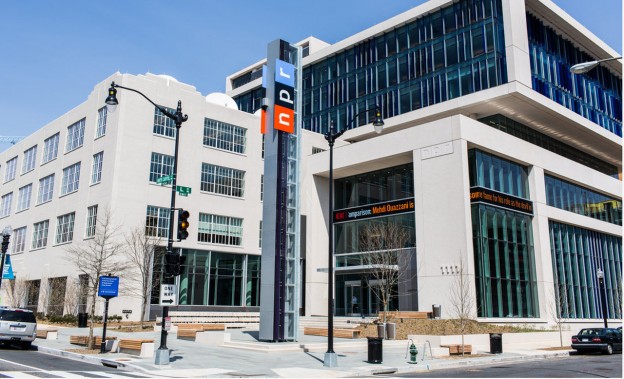 The terrestrial radio business has been forced to adapt once again as more people get their audio content online, via streaming services or satellite radio. Podcasts, streaming embeds and even YouTube have multiplied the publishing opportunities for branded stations, but how can they recreate themselves with digital tools? What kind of content does a radio station produce for the digital age? How are people listening to audio content? This week on the podcast we’ll discuss the evolution of radio and what the new NPR CEO Jarl Mohn brings to the table as the flagship public radio service refocuses on diversity. This week, our special guests are Suzanne Perry from the Chronicle of Philanthropy, Stan Alcorn, who contributes to NPR and Fast Company, and Joseph Lichterman from the Neiman Journalism Lab. They will join regulars Andrew Lih of American University, Fannie Cohen of PBS MediaShift and host Mark Glaser.

Suzanne Perry is a senior editor at the Chronicle of Philanthropy, where she covers financial and management issues affecting nonprofit groups. She has previously held reporting posts at Reuters news service in Brussels, the Chronicle of Higher Education, and daily newspapers in Minnesota. She also served as communications director at Minnesota Public Radio from 2002 to 2004.

Stan Alcorn is a print, radio and video journalist based in New York City. He reports regularly for outlets like Marketplace, WNYC and Fast Company. Follow him for occasional but important tweets @stan_alcorn.

Joseph Lichterman is a staff writer for the Nieman Journalism Lab at Harvard University. He previously reported for Reuters in Detroit, mostly covering the city’s bankruptcy, the largest in U.S. history.

He’s also written and reported for Automotive News and Michigan Radio, and he was the editor-in-chief of The Michigan Daily, the independent student newspaper at the University of Michigan.

NPR announced Jarl Mohn as the new CEO, marking the fifth CEO for NPR in eight years. He’s being hailed as a turnaround artist and has a long history in cable TV rather than radio or non-profits. He was an influential part of MTV‘s early long-form programming and also brought rap videos to the station. He later founded the E! network and created the show “True Hollywood Stories.” Mohn will continue to push the network forward digitally, as it builds it’s own tools in-house, like an analytics dashboard that pulls in audience and sharing data so producers can make informed decisions about their content.

Many content providers are spending on developing their own apps to deliver content. Stitcher recently debuted a “listen later” feature that archives bookmarked content. This is similar to the “discover” feature on the new WNYC app, specifically designed to archive audio content for listening when a the commuter is in a cellular dead-zone underground.

Creatively, boundaries are being challenged as more producers take the opportunity to self-publish and capture a listening audience. Some public radio stations are acquiring and repackaging independently produced podcasts, creating leg-up opportunities for new voices and stories through services such as PRX. Appealing to black, hispanic, and female listeners is a stated goal for several NPR shows, one they say will continue on despite the recent cancellation of Michel Martin’s “Tell Me More.” What does the future hold for NPR and terrestrial radio? Will shifts in listening toward streaming services and podcasts help or hurt the incumbent players?