Why Audiobooks Are the Next Big Thing in Self-Publishing 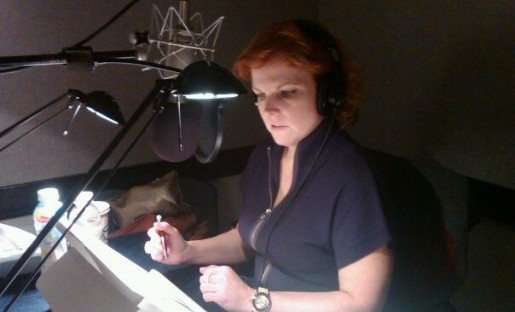 The author, Laura Caldwell, in the recording booth.

I’m listening to the audio version my first book, “Burning the Map.” Which means, I’m listening to a talented actor, Piper Goodeve, inhabit the voice and the soul of Casey Evers, a character I wrote long ago, a character I wasn’t sure I’d see (or hear) from again. It’s even more gratifying because I produced the audiobook. After 14 books out, I have self-published for the first time.

"When I asked some of the exuberant e-pubbing authors about self-publishing your work on audio, very few were tapping into their own rights on that front."

When self-publishing began being discussed in earnest five or six years ago, I wasn’t much interested. I had been published the old-school way — write a book for five years, shop it for a decade, find elation upon agent-landing and publisher-wrangling. Then, of course, experience an inevitable evening of expectations, and keep writing, thankful that someone prints your stuff, distributes it, gets it into Borders for gosh sake — until that didn’t entirely matter anymore once Borders closed, as did many Barnes & Noble stores and even more independent bookstores.

So I started paying attention when author friends discussed self-publishing. I read the blogs by exuberant writers intent on sharing every financial detail of their lives down to their bank statements to show what they’d been paid by traditional publisher versus e-publisher. The evidence seemed to mount in the favor of self-publishing, but still I wasn’t swayed. I had an agent who I adored, and who had taken me on even though my original agent would get paid on books we sold for years before she could sell anything. E-publishing, I figured, would cut my agent out of the deal, wouldn’t it? And what of my publishers who had believed in me?

When I heard a little about self-publishing audiobooks, though, that’s when I really perked up.

My mother was a pioneer reader of “books on tape.” She would wait months for the library to get one in, which she would then listen to while walking the neighborhood. Later, when she moved to the Northeast, she hiked around forests and rivers, earphones in place. There was always a book going in her car. And she had passed on her love of books on tape to me.

The same reasons that brought my mom and I to audiobooks — adding depth and distraction to a long walk or a routine commute — has been part of the growth of the audio market. Either the listener is entertained after an audiobook, or if you’re a listener like me, you get a lot of self-help and spiritual assistance via Eckart or Deepak or Hicks.

Whole web communities, hosted by places like Lululemon and Runner’s World, have bloomed and bonded over listening to audiobooks while running. But many audiobook listeners, according to the many audiobook forums, do so to make the mundane — washing dishes, folding laundry — more palatable and even educational.

Yet when I asked some of the exuberant e-pubbing authors about self-publishing your work on audio, very few were tapping into their own rights on that front. Some still had deals and relationships with audiobook companies they sold to years ago. Others just thought it sounded like way to much work to produce an audiobook. And how would they even go about doing it?

I’ve had experience with the somewhat traditional audio road. My six Izzy McNeil novels were made by Audible in a program with my publisher. While they were in production, I’d gotten to listen to some auditions, and was able to green light the actor they hired. And when I happened to be on the East Coast when they were in the booth, Audible asked me to interview the actor for a bonus track for listeners.

Since my character, Izzy, was a brash, curvaceous redhead, I expected something similar of the actor playing her. Jennifer, the woman we’d casted, certainly sounded like a sassy lawyer who lived in Chicago. When I arrived at the book, I was shocked to find a teensy Taiwanese woman.

“Look at me,” she said. “I’d never get cast in the Izzy McNeil TV show. But I can be cast as her for audio. I love this business.”

She told me how the rise of the audiobook had produced a whole new career for her. With her voice she could be a character in Chicago or in Mumbai or in London. Audiobooks, it turns out, haven’t just provided more opportunity for authors, but for actors as well.

An Author’s turn in the booth with ACX

My own audio debut came on the birth of ACX, an Audible self-publishing program, providing an answer to those authors who assumed producing their own audio would be too challenging. ACX is an Internet exchange for authors who own their audio rights and want to connect with talent and producers. As a result of the exchange, I was told, a writer living in Maine could produce a book with an actor from Philadelphia and even an editor in L.A. As an author, you become the casting agent, and you could choose from a plethora of voices to give new wings to a character you spent years creating.

But because I had a memoir out, “Long Way Home: A Young Man Lost in the System and the Two Women Who Found Him,” and because I was partly the narrator of that book, I could be my own talent for that book. (In general, fiction writers are not encouraged to read their own work.)

Audible offered use of their booth if I wanted to do “Long Way Home,” and so off to New Jersey I went. Every day. For 10 hours a day. For five full days.

Before, narrating a book sounded so genteel to me, sort of like reading to a room full of rapt, small children. The reality is that you sit in a dark editing booth, the only light in the room shining on the print of the book in front of you. Read one word off — say, “She walked in the store,” as opposed to “She walked into the store,” and the buzzer sounds from the attached booth. “Let’s try it again,” you’ll hear from the engineer in there. When you have to start over and over because you seem to be mumbling, the engineer sends you down the hallway for some Throat Coat tea. But that’s about all the break you’ll get. Time in the booth is money. Male or female, the engineer’s voice becomes the one you fear. (You hear it in your dreams after. Really).

The process of narrating “Long Way Home” was not just exhausting. It was injurious of throat and the brain. But I was glad for it. It gave me a whole new set of information for actually producing my own books in the future.

I’m only recently getting into the digital e-publishing (the “traditional” e-pubbing if you will). But even then, it’s with a novel that never quite got off the ground. Because of this, my agent and publisher have already had their own whack at it. In the minimal amount I’ve learned so far, self-publishing is a bit of labyrinth of formats and choices. Even within the Amazon self-publishing experience (ACX is an Amazon-owned company), they tend to have programs that criss-cross over each other, leading to some redundancy (an issue they readily admit to and say they’re working on addressing that). But ACX is pretty darn simple. And that’s from someone who’s been in from the beginning.

Go to ACX.com and log in with your Amazon email address. Let them know if you’re reading the book yourself or want to cast a narrator. Input information about your book and the type of voice you’re looking for to augment your Amazon listing, which ACX pulls over for you.  Assert you’re the copyright owner, and you’re ready to start listening to audition tapes.

The process of completion of an audiobook can take as little or as much time as you want.

With “Long Way Home” and “Burning the Map” now out in audio, both having been self-produced in different manners, I’m now a card-carrying member of both the old and new schools of publishing. “Burning the Map” is letting me blaze of trail of creativity and control I’ve not experienced before in this business.

For “Burning the Map” I casted a fantastic narrator named Piper Goodeve. Piper is younger than me, but very much a veteran of the business. As opposed to when I had read and produced my own book (and inched toward releasing it whenever the other parts of my life parted for a few moments), Piper became not only the voice of my character, Casey Evers, but also the project’s manager. This probably came, in part, from the fact that we’d chosen the profit-sharing option that ACX provides, rather than paying Piper up front. Since the book’s release in January, I realize I’ve gained a narrator and also a partner for bringing “Burning the Map” to the new audiobook masses.

But I won’t necessarily forgo traditional publishing. That’s the best thing I found about this process — self-publishing one’s work, in one manner or another, doesn’t mean you turn your back on traditional (or any other ways) of publishing.

Laura Caldwell is a former civil trial attorney, now Distinguished Scholar in Residence at Loyola University Chicago School of Law, Director of Life After Innocence, published author of 13 novels and one non-fiction book.