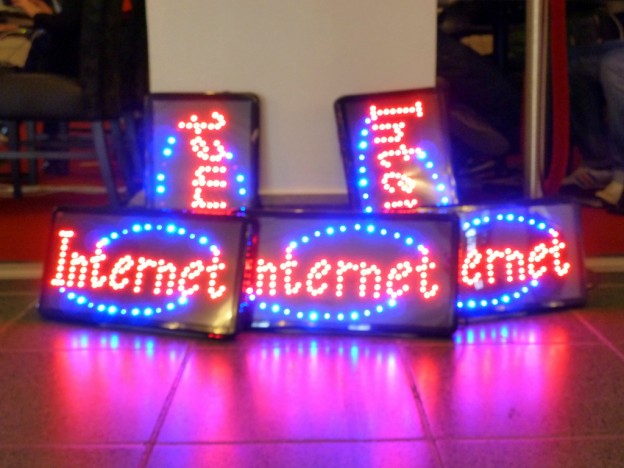 Photo by hdzimmermann on Flickr and used here with Creative Commons license.

The World Wide Web turns 25 March 12, and the Pew Research Center’s Internet Project and Elon University’s Imagining the Internet Center are issuing a number of important reports coinciding with this milestone.

When you reduce it to simple numbers, the power and influence of today’s networked communications is fairly mind-boggling.

"There was a fairly even split between the positives and negatives expressed in the themes identified as the most common among the nearly 1,500 written elaborations by people who answered the question about Internet impact by 2025." - Janna Anderson

Recently released results gathered in a Pew survey of U.S. adults found that 87% overall use the Internet and 97% of people ages 18-29 and 97% of those with college degrees are Internet users.

In the same survey, when asked which technologies would be the hardest to give up, the Internet was ranked as most difficult, followed by cell/smartphone, television, a landline phone and social media.

As the director of the Imagining the Internet Center at Elon University I am an Internet futurist and research partner with Pew Internet. I have been working since 2000 to document people’s activities online. My special area of interest is the Future of the Internet survey series, in which we ask experts and highly engaged Internet users to share their expectations about the likely future of human networks.

We have conducted six such surveys, canvassing thousands of experts for their opinions about the impact and likely future of networked communications since 2003. In the latest survey, Digital Life in 2025, the Imagining the Internet Center and Pew Internet asked thousands of experts to imagine what the most important impacts of the Internet will be by 2025. The prompt was: “Make your own prediction about the role of the Internet in people’s lives in 2025 and the impact it will have on social, economic and political processes.”

We received nearly 1,500 written elaborations to this question, totaling 150 pages of single-spaced content. Most expressed great enthusiasm about the potential benefits of expanding technological evolution.

However, most of the experts’ optimistic responses were often accompanied by at least some concerns expressed over the negatives that are likely go hand-in-hand with the connectivity that allows the perceived benefits.

For instance, an anonymous respondent who works as a technology developer and administrator warned, “There will be more loss of privacy, more regulation, less face-to-face social communication, loss of local or geographical identity, and an onslaught of ignorance from being misinformed or believing what is being flashed to us from who knows where.”

Negatives accompany the positives seen for the future

There was a fairly even split between the positives and negatives expressed in the themes identified as the most common among the nearly 1,500 written elaborations by people who answered the question about Internet impact by 2025. They were:

>  Sharing over the Internet will be so effortlessly interwoven in daily life it will be invisible, flowing like electricity, often from machine to machine

>  The spread of the Internet will enhance global connectivity, fostering more positive relationships

>  The Internet of Things, artificial intelligence and big data will make people more aware of their world and their own behavior

>  Augmented reality and wearable devices will give quick feedback on daily life, especially in regard to personal health

>  Borders are being blurred, and new ‘nations’ may appear, as online groupings of people with shared interests exist beyond the capacity of nation-states’ control

> The Internet will become “the Internets” as access, systems and principles are renegotiated

>  The Internet-enabled education revolution will spread more opportunities, and less money will be spent on real estate and teachers

>  Dangerous divides between haves and have-nots may expand, resulting in resentment and possible violence

>  Pressured by these changes, governments and corporations will try to assert power and at times succeed as they invoke security and cultural norms

>  Most people are not yet noticing the profound changes today’s communications networks are already bringing about; these networks are becoming more disruptive

>  Foresight and accurate predictions can make a difference; ‘The best way to predict the future is to invent it’

A sample of more than 1,000 predictions

Following are just a few partial excerpts of the experts’ imaginings of the future of the Internet:

David Clark, senior research scientist at MIT, noted, “Devices will more and more have their own patterns of communication, their own ‘social networks,’ which they use to share and aggregate information, and undertake automatic control and activation.  More and more, humans will be in a world in which decisions are being made by an active set of cooperating devices. The Internet (and computer-mediated communication in general) will become more pervasive but less explicit and visible. It will, to some extent, blend into the background of all we do.”

Nicole Ellison, an associate professor in the School of Information at the University of Michigan, predicted, “As more of the global population comes online, there will be increased awareness of the massive disparities in access to health care, clear water, education, food, and human rights.”

Vint Cerf, Internet protocol inventor and Google vice president, predicted, “Privacy must be improved but transparency about what information is retained about users also has to increase. More business will be born online with a global market from the beginning. Massive open online courses (MOOCs) will become important revenue streams.”

danah boyd, a research scientist for Microsoft, responded, “People will continue to connect to people and information, and it will become more seamless and integrated into every aspect of daily life. We’re there in certain populations already, but it will be more widespread in 12 years.”

Bob Frankston, Internet pioneer and technology innovator, said, “We’ll start to rethink how we create systems. We’ll just assume, for example, that a medical monitor will ‘just work’ wherever we are and if we show symptoms of a heart attack in the next hour an ambulance will be there to meet us. We’ll continue to define new topologies for social relationships and trust so they are less tied to geography. We’ll also see the rise of metadevices and understandings, some of which is latent in the terms big data and Internet of Things—terms that will fade away because reality will be far more interesting.”

Mike Liebhold, senior researcher and distinguished fellow at the Institute for the Future, commented, “The Internet is morphing from the global library into the global supercomputer. By 2025, almost every application or service we can imagine will be enhanced by the application of enormous computation enabling widespread applications of capabilities like mining, inference, recognition, sense-making, rendering modeling as well as proactive contextual computing.”

Laurel Papworth, social media educator, wrote, “Gamification sees the workplace change to micro-jobs, measured and monitored. Personal reputation is quantified by scoring systems and algorithms so complicated that only the bots that change them by the microsecond can understand them. The current walls that separate humanity (demographics, psychographics) will diminish, and after a massive trolling war, value systems will be re-established with people fearful to say what they really think, in case their personal reputation score—online, viewable, actionable—diminishes. X Factor 2025 continues to rate well.”

David Weinberger, senior researcher at Harvard’s Berkman Center for Internet and Society, responded, “The future of the Internet depends on many imponderables, including whether the Internet gets sold to the access and content providers.”

You can read more here  about each of the points discussed here, as well as predictive statements about the Internet in 2025 by hundreds of experts such as Vint Cerf, David Clark, danah boyd, Jim Hendler, Paul Saffo, Bob Frankston and more.

Janna Anderson, director of the Imagining the Internet Center, is an associate professor of communications and emerging media at Elon University, author of “Imagining the Internet: Personalities, Predictions, Perspectives” (Rowman & Littlefield) and lead author of the “Future of the Internet” book series (Cambria Press). She has been working as a contract researcher for the Pew Research Center’s Internet & American Life Project since 2000. She also works as a consultant, advising organizations on technology trends and human factors in emerging networks. Co-authors of the Digital Life in 2020 report are Lee Rainie and Maeve Duggan of Pew Internet.