A Touch of Anarchy: WVU’s Experiment in Education 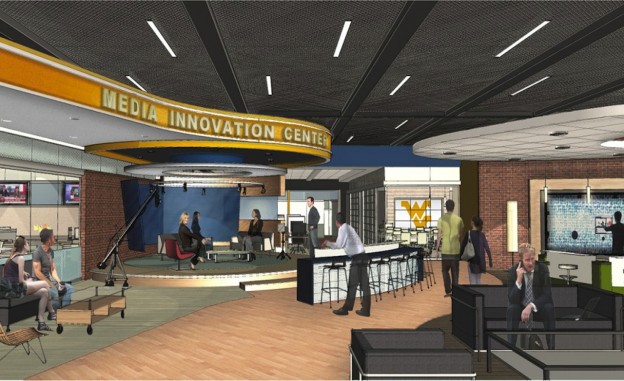 Drawing of the media innovation center at WVU via WVU, scheduled to break ground in 2014.

This summer as I was sitting on my front porch, I got a phone call from Maryanne Reed, the dean of West Virginia University’s J-School. She was wondering if I’d be interested in teaching an experimental journalism course. Scott Klein, a friend from ProPublica, had recommended me. She said I’d have to invent the class. It was outside the curriculum. And Scott had called the program that the J-School was preparing to launch “the punk rock scene of new journalism.”

The project will be built around the way we consume media on the internet, not constructed to flatter the fiefdoms of a newsroom.

My arrival at the Journalism School at WVU. (Illustration by Eric Palma)

So in 2014, as WVU prepares to break ground on an Innovation Center, I’ll be the school’s first Ogden Newspapers Innovator-in-Residence.  I’m co-teaching with Assistant Professor John Temple and Dana Coester, head of the the Innovation Center, virtually teaching the class from New York and flying out to visit several times during the semester.

The dean has generously granted me the latitude to make journalism without borders. So here’s the plan.

We have eight students plus an assist from former WVU student Elaine McMillion, super-star producer and director of hollowdocumentary.com. Most of the students were recruited to ensure a mix of skills. Some asked to join after they heard about the class. They come from the J-school, the design program and the computer science division. Both grad and undergrad. They have a wide set of interests, from a student working at NASA to a baton twirler. (With fire, yes.) (On YouTube, of course.)

We’re starting by creating and implementing an on-campus poll and gathering statistics about our topic. The poll data will inform the reporting and help us identify who, what and where to cover. Why and when as well. We’ll also visualize the data and the story will support it, reversing years of habitual reverse-engineering of data to compliment stories.

Mobile-first will serve as a constraint for shooting, writing, editing and designing. The project will be built around the way we consume media on the Internet, not constructed to flatter the fiefdoms of a newsroom. It will be designed responsively, and we’ll shower attention on desktop users on the tail end of development.

During the editing phase we’ll see how all the pieces come together and then build the project around the most compelling form. Or perhaps all of the forms separately. Or some in combination. No ginning up visual elements at the 11th hour to “break up the grey.” Most compelling piece rises.

We’re not talking about the topic yet, but we’re looking at a national issue through the filter of the campus. We’re aiming to surface the culture around our topic boldly, intimately and thoroughly.

Most classes will have a guest speaker. Here’s the lineup. The titles are mostly my way of framing each class for the students, but they give you a sense of structure of what the students need to think about as we build the project.

We had our first class Jan 14. We publish in May.

It’s not clear yet what our final product will be, and that’s a tad unsettling. I’m looking forward to our successes and to stumbling, as well, since failure tends to be super-instructive. And I’m excited to see what a group of digital natives bring to the table.

One response to “A Touch of Anarchy: WVU’s Experiment in Education”