What Civic Crowdfunding Means for Non-Profits 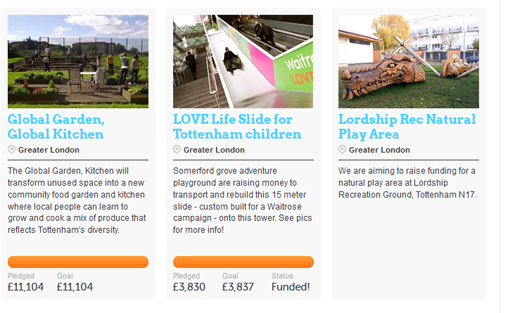 The neighborhood of Tottenham, North London earlier this year partnered with Spacehive to promote projects by the local community.

The rise of civic crowdfunding — the use of crowdfunding to provide services to communities — has led to the emergence of several radical (and not-so-radical) visions of what the process of shaping the world around us could look like in the future.

"The intersection of individuals (the crowd), the public sector, the for-profit and social sectors represents the most fruitful application of civic crowdfunding."

As some of the earliest examples of civic crowdfunding on Kickstarter show, the process can be initiated entirely by individuals or for-profits. For other platforms such as Citizinvestor, projects need to be initiated by governments. But there’s a big missing piece in the public-private realm that is not adequately captured by either of these models: the organized non-profit space. In my view, the intersection of individuals (the crowd), the public sector, the for-profit and social sectors represents the most fruitful application of civic crowdfunding — bringing together the full spectrum of actors that influence the built environment and the resources that communities share.

Successful non-profits might be wondering whether they need to devote resources to crowdfunding. As one senior fundraiser at a public library-linked non-profit asked me: “Why spend months on an intensive campaign to raise thousands when I can have one in-person meeting with the right individual and raise a million dollars?”

The need for alternative fundraising methods clearly varies a lot across organizations. But even comfortable non-profits accept that crowdfunding has the potential to deliver a deep engagement between fundraisers and backers. And, as emergent civic crowdfunding models suggest, it has the potential to produce new alliances — creating a space for for-profits, the social sector, the public sector and individuals to be at the same table, working toward a common goal.

So what are the ways that non-profits can interface with civic crowdfunding as it stands? I’d like to propose three methods.

The first method is campaign management. The organization takes responsibility for receiving and spending the money, using an existing platform. Two platforms that allow this approach are IndieGoGo and Spacehive; Kansas City-based Neighborly allows non-profits to post projects once they’ve passed through a vetting process. This is the most conventional, v1.0 model, and has been successfully executed by several groups. In April, the Chicago Parks Foundation raised $62,113 for the expansion of the city’s Windy City Hoops basketball social program on IndieGoGo.

The benefit of the “promoter” approach is that it gives the organization complete control over the messaging associated with the campaign. The drawbacks are that the organization also bears all of the risks of failure, and organizations with large existing funding sources will need to justify carefully why they’re asking for additional money.

The second method is curation. The organization draws attention to crowdfunding projects that support its values or benefit its community, most likely by hosting a page on an existing crowdfunding website. New York City Council was one of the first organizations to adopt this model by creating a Kickstarter page, and the neighborhood of Tottenham, North London earlier this year partnered with Spacehive to promote projects by the local community.

As a curator, the organization can leverage the best grass-roots ideas in the communities they serve. It is also presumed to have exercised some degree of due diligence on the campaigns it promotes, and so is likely to be held partly responsible if campaigns fail to reach their funding targets or to fulfill their projects.

The third method is hosting. The organization hosts a crowdfunding campaign on its existing site or a dedicated campaign site. This could be a single project page using a widget for a payment platform such as WePay, although the organization would need a manual solution to handle the other affordances of crowdfunding (such as rewards, match-funding and funder profiling) or miss out on them altogether. The Long Now Foundation is using this model for its Salon campaign, which has raised just over half of its $495,000 target. For organizations hoping to host multiple campaigns or projects, the platform would probably be a white-label version of an existing paid service or an open-source solution, such as Catarse. Catarse is the most robust open-source codebase that is freely accessible, and has been used by 17 platforms to date.

To be sure, the best existing platforms provide many other social and strategic layers to the process that not all non-profits have the capability or desire to provide: campaign advice and management, a social network of would-be funders, and connections to larger funders and interest groups. What is certain, though, is that many non-profits are established experts in these areas. Many of them have stronger and more-established brands than even the best-known crowdfunding platforms. The quality and scale of crowdfunding campaigns would undoubtedly increase if they decided to apply their expertise to the field.

For established and smaller non-profits, there are other questions: Are large contributions to a campaign tax deductible? (Answer: for some platforms, yes, for others, no); Are the fees associated with online crowdfunding higher than they might pay through direct donations (Answer: according to most standard terms, yes); What accountability levers do non-profits have related to projects they have curated or promoted? (Answer: depends on the platform). These questions are an opportunity for existing platforms to cater to the needs of large non-profits. Bringing them into the field in large numbers would be a game changer for civic crowdfunding.

Image © Rodrigo Davies. Not for reproduction without permission.

One response to “What Civic Crowdfunding Means for Non-Profits”