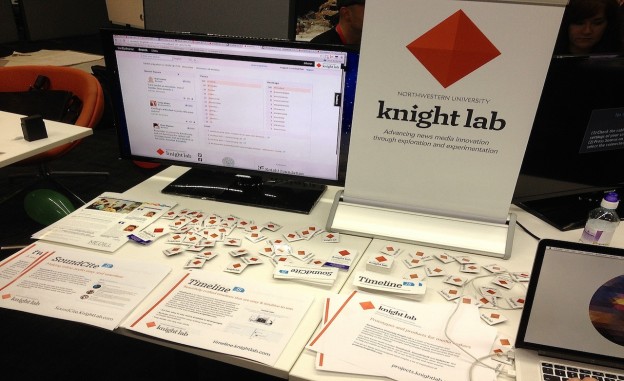 Image by Irvin Chen on Flickr and used here under the Creative Commons license.

What started as an idea for creating tools for local media in Chicago three years ago has evolved into an innovation hub for the global journalism and technology community.

The Knight Lab at Northwestern University brings together journalists and technologists interested in building tools to benefit the news industry. The Lab’s corps of professional staffers, faculty members and students experiment with prototypes in addition to creating ready-to-use services to improve information delivery — and the work of journalists.

"I think that's one of the most powerful ways to make innovation happen, by forging connections with other people who have new and different ideas that you may not have." -Ryan Graff, Knight Lab.

Many of the Lab’s prototypes were developed by the journalism and computer science students who enrolled in collaborative innovation courses, and some of these projects continue to evolve. For example, Untangled began as a student project to help investigative journalists correlate information they find in various databases. Expanding upon the basic idea of a “browser-based knowledge management” tool, the Lab is bouncing the idea around the news technology community in hopes of narrowing its scope.

Another project, TimelineJS, is a timeline building tool that’s been deployed 250,000 times in 48 different languages (and counting).

I chatted with the Lab’s Joe Germuska, director of technology, and Ryan Graff, communications and outreach manager, about current projects, where the Lab is heading and more.

How do you decide which projects will be a good fit for the Knight Lab?

Germuska: Most of what you see on projects.knightlab.com are done in the specific student class that gets taught a couple times a year [at Northwestern University]. Seed ideas are collected predominantly by the professors who are teaching the class, and some get selected and some don’t. The professors try to use their judgment and, through conversations with people at the Lab, try to come up with something that is reasonably interesting and feasible for students to get to an interesting point in a 10-week quarter.

What propels certain student projects to take on a life of their own after the class is done?

Germuska: Most of [the projects] are destined to be archived, but after the class is done we collectively take a look at what was shown. When we feel like some of them are likely to have more interesting questions to resolve, we decide to carry them on a little further.

Since I’ve been in the Lab — less than a year now — Neighborhood Buzz and twXplorer are the two that most directly came out of the classes. Neighborhood Buzz [a tool that tracks the Twitter chatter around certain neighborhoods] is one where it seemed pretty interesting, so we decided to invest more time in it. And we found out that it’s pretty hard to go from what seems interesting to a really usable tool.

Because the volume of geo-coded tweets is pretty low, the ability to actually do categorical analysis of short tweets is very hard, so that one didn’t show as much promise as we thought it might.

TwXplorer [a Twitter search tool that filters by topic], on the other hand, got a lot of good feedback from people, and we are continuing to think about ways that we can add more to that. We’re not looking to be the provider of the world’s finest Twitter search tool. We just want to share the results of what we’ve done and learn from how people used them.

With most of your projects’ code going on GitHub, have you seen much collaboration with other people in the tech world?

Germuska: A lot of our projects aren’t necessarily good candidates for [collaborative coding]. It’s usually more trouble than you might at first think to pick up [changes in the code], drop it down in a new place and adapt it to your needs. It takes a lot to make a project a really good candidate for collaborative development and open source contributions. It’s an evolving art for us to even understand exactly how to get those from people. It’s not that people can’t take the code and do things with it. It’s just hard to integrate their changes back into it.

Graff: Joe and I probably see this a little bit differently. Joe sees it like “Who’s contributing to the code base?” and I see it like, “What other cool projects have people done with technology to be developed?” There was a developer who reimagined TimelineJS as a way to present a creative portfolio, so he basically took all the code and restyled it. It had the basic functionality of TimelineJS, but it has a really unique look. He released it to the world and gave a tutorial on it, and we found his work in other instances of TimelineJS throughout the web.

Is there a particular advantage or disadvantage to being tied to a university?

Graff: One of the cool things that has come out of this is having students involved in the Lab. We have a number of student fellows, and I’m not sure that was always [the plan] but it’s been a great way to help students who are interested in technology and journalism learn more about this intersection.

In fact one of our products, SoundCite [a tool that enables you to add inline audio to a text story], was thought up by a student fellow named Tyler Fisher, a senior at Medill [Northwestern’s school of journalism and communications] this year. He developed a prototype in conjunction with Medill professor Jeremy Gilbert. It was a pretty solid prototype but it wasn’t commercially ready. But he brought the project to the Lab and Joe and our other developers helped him put the polish on. So now, a project that was thought of and developed primarily by a student is used by newsrooms around the country including the Washington Post, Texas Tribune and Education Week. So that’s one pretty cool aspect of being involved in a university.

What are some other examples of newsrooms using Knight Lab tools?

Graff: The Denver Post used TimelineJS to help cover the Aurora theater shooting, and they subsequently submitted that instance with their Pulitzer package which went up to win the Pulitzer for breaking news in 2013.

Germuska: One thing I like that La Nación does [with TimelineJS] is they actually use it as an index for ongoing story coverage. They make a timeline and each slide is basically a brief about a different story that just ran in their regular flow. Also, when Pope Francis ascended they made a timeline of all the popes. They went to Wikipedia and got the list and made about 240 slides, which is the largest timeline I’ve seen.

Which projects are you personally most excited about right now?

Graff: I’m most excited about StorymapJS [a sibling to TimelineJS that adds a story element to maps]. Among a certain population of technology-oriented journalists, maps have sort of a bad rap. Since one of the things that journalists think about a lot is how to tell great stories, maps are a really good way to explore and poke around in that, but there’s not an inherent narrative structure to it. So StorymapJS is a pretty cool way to add that narrative to maps.

Germuska: There’s one I’m pretty curious about [from this quarter’s prototyping class] that they’ve been calling TweetBeat. You start with a list of Twitter handles, and it would work out a network of high-influence tweeters connected to those people and then turn that into a Twitter list to help you produce a beat. I like TweetBeat especially because it’s the right level of ambition of implementation and doability. I don’t think it’ll be that hard to make it available to people, and that’s one thing I miss about being in the newsroom, the frequency at which I’m able to actually deliver things to people. Our tempo [at the Lab] is different, but it’s nice when you can say “Here’s a tool, and you can use it today.”

How do you draw that fine line between exploring an idea that’s exciting and deciding what’s actually doable?

Germuska: To some extent it’s our obligation at a university to not always draw that line…. We have to find room for the big experimental ideas while also attending to the fact that journalists have real problems today and can’t necessarily wait around for something to come to fruition. So I like the fact that we can work both ends.

Are you open to ideas from people outside of the university or Chicago area? If someone overseas has an idea for a cool product, can they approach you?

Graff: We always want more ideas and interaction. We always want to know what people are working on. If they have ideas for us, we’d love that. But we also want to know what they’re up to too. I think that’s one of the most powerful ways to make innovation happen, by forging connections with other people who have new and different ideas that you may not have.

Over the past three years, the Knight Lab’s vision has shifted from providing journalism tools to local Chicago media to making tools for journalists worldwide. Where do you see the Lab heading next?

Germuska: We’re evolving our understanding of how we should be working with students. We’re doing a better job now of connecting to the Medill graduate students who are interested in this kind of work and getting them integrated with the lab. We’re encouraging our students to network with other students around the university who want to learn these new media technology skills but just can’t get them in a regular curriculum. We can’t really teach everything. It’s not in our job description, but we can try to clear a path for them and point out the direction to keep them from getting stuck.

Graff: The ability of the Knight Lab to facilitate learning in this particular niche is really exciting, and part of that is organic. Like Knight at Night, the open-lab hours that our students host for other students, is really incredible. The initiative of students to take what they know and work really hard to make sure more people know it is pretty inspiring.