What Newspapers Can Learn From Brands 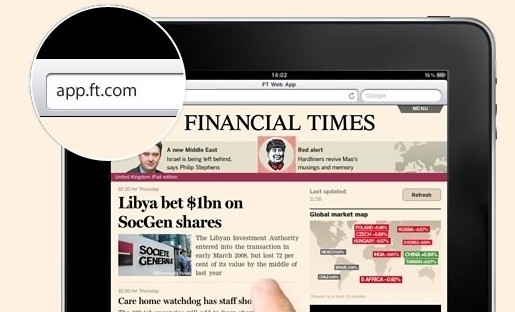 The Financial Times recently added "news in context" to part of its digital strategy.

A few weeks ago, the Financial Times announced it was taking the next steps in its “digital first” strategy, which includes consolidating its print edition, shifting from “reactive reporting” to “news in context,” and altering its production schedule to serve an audience that expects updates throughout the day.

There’s been so much conversation lately about how everyone is a publisher and how much brands are learning from media in creating their own “branded content.” But, as the Financial Times move shows, the inverse is also true. What FT is doing might seem innovative for a newspaper, but it’s the kind of strategy global brands have been using for years: You have to meet your audience. That means creating content for conversation, providing information that’s useful or elicits an emotional response, and crafting a voice. Crafting a voice is a major strategy brands have adopted to get digital content right, and it’s something that traditional media outlets should mimic.

"We live in the age of social, and if a story doesn't elicit an emotional or intellectual response in a reader, it will get passed by."

The modern audience has less time and more options for news than ever before. To make a newspaper’s content stand out, it’s essential to provide content that captures attention and sparks the viewer’s imagination. In other words, it’s essential for a newspaper to think like a brand.

Txchnologist is an online magazine created by GE.

The key to engaging the modern audience is to make shareable content. We live in the age of social, and if a story doesn’t elicit an emotional or intellectual response in a reader, it will get passed by. That doesn’t mean every post has to be funny or highbrow, but it does mean that content should have a voice.

Brands, especially the larger ones, have understood this for a long time. Giving a multi-national conglomerate a voice is by no means an easy feat, but it’s one of the most important things that brands are doing to enhance their reputations. Examples of brands with strong voices are GE and IBM, which have crafted their content around innovations in science and technology. Both sponsor general interest science and technology magazines with large followings, as well as Tumblr blogs showcasing their work.

FT’s addition of “value-added context” to its digital first strategy underscores the importance of adding voice to content. Changing from reactive reporting to value-added news — meaning adding analysis and point of view pieces — is smart.

The race to be first in reporting a story is leading to irrelevant news that doesn’t make the audience any smarter, well informed or engaged. People are emotional and pay close attention to things with context and connection. Social currency is more important than ever, and if a story lacks a voice and contextualizing information, it’s more likely to be overlooked and unshared.

What people need now is an interpretation of the news. This doesn’t mean adding in bias, but creating thoughtful and engaging content that starts conversation. The Internet has leveled the playing field and enabled audiences to set the stage, telling publishers in real-time the type of content they want to see and read. In this age of democratic journalism, it’s time to listen. If viewers aren’t spending time on a website, it’s time to shake things up.

For example, GE and IBM aren’t trying to reach everybody, and that’s their intention. As Beth Comstock, GE’s chief marketing officer, recently stated at an Adweek conference, “Sometimes you might want to connect with 4 million people. But sometimes maybe you really only want 4,000…or 400. It’s about getting it right with the right audience.”

For a newspaper, this may seem like a counterintuitive strategy, but it’s part of this new age of democratic journalism: Make something for everyone. BuzzFeed is a good model for this. Not every list they publish is relevant to everyone, but each one is relevant to enough people that they have been hugely successful.

What BuzzFeed gets is the conversation part of the equation. They understand that people share content because it’s something they associate – or want to associate – with. This returns to the importance of voice: If the content isn’t relatable, engagement declines.

Finally, it’s important not to overlook the tools of the digital age. There’s a rule good website designers live by: If a site doesn’t capture the viewer’s attention in a matter of seconds, they will move on. This applies to content creation as well. It means that today it’s more important than ever to capture audiences right away. In addition to telling great stories, this also means adopting robust visual vocabularies, such as breaking data down into digestible infographics, or publishing a video that imparts knowledge, like an interview with an expert or a time-lapse of how something is made.

These strategies provide more opportunity for innovative ways to tell stories, engage audiences, and share knowledge. It’s time for newspapers to embrace them. Brands that have been doing this for years and re-positioned themselves as publishers demonstrate how essential it is to adapt to the changing media landscape.

Alexander Jutkowitz, is the Managing Partner of Group SJR and has been an evangelist for the paradigm shift in marketing and communications toward the power of high-quality content. Jutkowitz  has worked in a wide range of disciplines – from political polling to digital architecture, brand strategy to content creation. He has worked in more than 30 countries leading communication, marketing and political campaigns for multinational corporations, not-for-profits, governments and trade associations.

2 responses to “What Newspapers Can Learn From Brands”