‘Big Disconnect’ Offers Guidance for Parents in a Tech-Crazed World 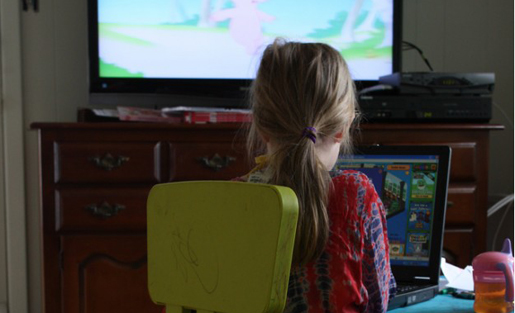 Did you hear the one about the 7-year-old boy who opened a Wii on Christmas morning and when his parents finally checked on him, he’d played for 18 hours? Or the one about the 13-year-old girl who accidentally “butt-dialed” an old acquaintance whose number now belonged to a transsexual prostitute, who then launched a vendetta against the girl? Catherine Steiner-Adair, a psychologist whom parents seem to call whenever there’s a digital/psychological crisis at home, has heard all these stories and more, and shares them in “The Big Disconnect: Protecting Childhood and Family Relationships in the Digital Age.”

Steiner-Adair believes the tech-enhanced present has ushered in profound change in the way children develop and the way parents relate to them. “Our screens are sucking us in,” she writes, “in ways that shows like “The Brady Bunch” never did.”

"if they become addicted to playing on screens, children will not know how to move through that fugue state they call boredom, which is often a necessary prelude to creativity." -Catherine Steiner-Adair

As a parent of two kids, age 4 and 7, I read this book with my family in mind, because it feels like parents today are navigating terrain there’s no real precedent for. I grew up with no cable TV, no cell phones, no video games except for those I played at friends’ houses, and no computer outside of school until middle school, and even then the dial-up Internet connection was so slow there was no temptation to overindulge in it. I often have to explain artifacts of the past to my children, who’ve asked what a phone book is and found the concept of a paper-based card catalog at the library fascinating and kooky. My son dug up some cassette tapes in the basement, and calls them “wheeling music.” It’s clear my kids’ childhoods are going to be different, and more tech-influenced than mine.

A new policy statement issued by the American Academy of Pediatrics on October 28 recommends parents control the quantity and content of the media their children consume, keep tech gadgets out of kids’ bedrooms, and model good behavior for kids by limiting their own tech use. Steiner-Adair advises the same limits, and backs these up with examples from the children and families she works with as a counselor. Here are the key lessons “The Big Disconnect” taught me, and the grades I’d give myself for how well I’m handling tech at each age.

No Screens for Babies – My Grade: A

Steiner-Adair’s advice for the parents of very young children is straightforward — no screens for children under 2, not ever, and put away the smartphone and the laptop when you’re with your baby. This is in line with the American Academy of Pediatrics’ recommendations. She writes, “Babies are often distressed when they look to their parent for a reassuring connection and discover the parent is distracted or uninterested. Studies show that they are especially distressed by a mother’s ‘flat’ or emotionless expression, something we might once have associated with a depressive caregiver but which now is eerily similar to the expressionless face we adopt when we stare down to text.”

I never let the kids watch TV or look at a computer or smartphone when they were babies, though the second kid was sometimes in the vicinity of a screen that his older sister was watching, and Steiner-Adair writes that it’s difficult to guard a younger child’s tech experience as carefully as the first. “It is an endless challenge,” she writes, “this role of IT parent in the digital age.” No wonder studies of first children show them to usually be higher achievers than subsequent kids.

Preschoolers – My Grade: B

For preschoolers, age 3 to 5, Steiner-Adair recommends strict limits on screen time, and an emphasis on old-fashioned play — dress up with actual play clothes rather than fashion show play on the iPad. I’ve been pretty careful with my kids during this age range too, though when they’re not busy with school I do let them have up to two hours of screen time a day, which sometimes means TV, and other times means computer or iPad games. According to the new American Academy of Pediatrics recommendations published late last month, I should probably bring that down closer to one hour a day. I only let the kids watch PBS or a DVD I approve of.

Steiner-Adair describes a preschool she visited where the children have trouble coming up with their own imaginative games — they can only import scenarios they’ve seen in video games or TV shows, and lack the ability to play with toys that require a “stick-to-it kind of attention.”

The main area for me to try to improve on, as a mom who works on a laptop from home, is to pay attention to “the moments when [kids] initiate connection and they need us to respond attentively.” Since reading this book I’ve tried harder to only use my computer when my son is watching cartoons, when he’s at preschool, or asleep — and the emphasis is on try — I am far from perfect at this. Not having a smartphone makes this easier — when I’m out with the kids at the playground or grocery store, I’m really there with them and I’m all theirs.

When my second grader recently read a reference to “a reality show,” she had no idea what that was, having never seen one. At one conference, the teacher told me that my daughter was advanced in reading, but didn’t seem as at ease with a computer mouse as other kids, to which I said, “So what?” But I’m not sure my digital avoidance can or should hold out much longer. At this year’s conference, the teacher said they’re teaching the kids to type in computer lab, even though some research suggests that they are not developmentally ready for this task. “We have to,” she said, “because they’re going to start taking tests on the computer next year.”

So I’m trying to introduce computers and other tech in a limited, positive way. My husband, a software engineer, has been teaching my daughter how to program, and I set up an email account that I monitor and control the password for so my daughter can practice typing and spelling in messages to grandparents and cousins. Meanwhile, while we’re doing this, my son sometimes sneaks away with the iPad and manages to find plane crash videos on YouTube. I have no idea how he figured this out.

Steiner-Adair advocates gradual tech introduction, and writes, “If you give them too many programmed games or if they become addicted to playing on screens, children will not know how to move through that fugue state they call boredom, which is often a necessary prelude to creativity.” This is why on road trips I don’t let the kids have the iPad. Road trips are for staring out the window, looking at the scenery, and yes, maybe even getting good old-fashioned bored.

Still, as hard as I try, I have an occasional parental tech fail. This weekend we were at a party, and as I remembered from when I was a kid, the adults talked and ate upstairs while the kids went off in a pack to the basement, where there was a ping-pong table and a TV. But when I was a kid, the only movies we had access to were those that the parents brought into the house. I remember being shocked at about 8 to see the older boys at the party watching “Weird Science,” which if I remember correctly has nothing much more racy than a woman in a tight cocktail dress, but depicted more adult situations than I’d seen before.

As I was enjoying myself at this party, glad that my kids have reached the age where I don’t have to constantly monitor them — HA! — my daughter came upstairs and said that the boys were watching “inappropriate” shows. “There was a music video of a naked man on a toilet,” she said, “and you could see his private part.” I went downstairs right away, and convinced my kids to step away from the Internet-enabled TV and use the ping-pong table, which no one was interested in.

Whenever you leave your kid in a house where another kid has unlimited access to the Internet, things like this will happen. Living in a society where not all parents monitor their kids’ tech use is similar to living in a place where people don’t get their kids vaccinated — the entire community is apt to catch a dose of whatever one kid has.

Teens and Tech – My Anticipated Grade: C or worse

I’m glad I read this book well before my kids will enter the teenage years. I’m good and scared now. When I think of all the stupid things I did as a tween or teenager — from writing about other kids or teachers in notes passed to my friends, or my first ill-advised attempts at humor in a high school newspaper column — I cringe at my kids having to go through these growing pains online. Every stupid or inconsiderate way I expressed myself was on paper, and has long since been recycled and forgotten. If I’d written the same things digitally, my mistakes would be recorded and belong to me forever, like Coleridge’s Ancient Mariner with the rotting albatross he’d killed attached to his neck.

Steiner-Adair advocates coming up with clear rules about tech tailored to each teenager. She describes some instances when a temporary immersion in tech, such as during an extended illness or after a cross-country move away from old friends, has been beneficial to teenagers. She provides several scripts and lists of rules parents can give their children, such as no computers in the bedroom, and a code of conduct: “Don’t be mean, don’t lie, don’t embarrass other people, don’t pretend to be someone you’re not, don’t go places you’re not allowed to go. Don’t post pictures that Grandma wouldn’t love.”

All these rules will be easier to enforce if a parent has been actively engaged throughout a kid’s childhood, and not zoning out in her own tech addiction as the kid grew up. Still, Steiner-Adair writes, “at times, even when [parents] know and take heroic measures to protect their children, they are helpless to stop the viral mob that can descend on a child with stunning ferocity.”

The prospect of that viral mob is terrifying, with stories of kids being bullied online to the point where they harm themselves appearing in the news regularly. I’m not sure what I’ll be able to do to prevent this during my kids’ teenage years, but I take comfort in Steiner-Adair’s idea that parents get credit for trying. If you’re trying, you’re present, and you’re setting strict limits on your children’s tech use, you’re halfway there to guiding them through the rocky shoals of growing up in this tech-manic world.

How would you grade yourself on managing the tech use of your children? Do you follow the American Academy of Pediatrics’ guidelines? Do you agree with them? Please let us know in the comments.