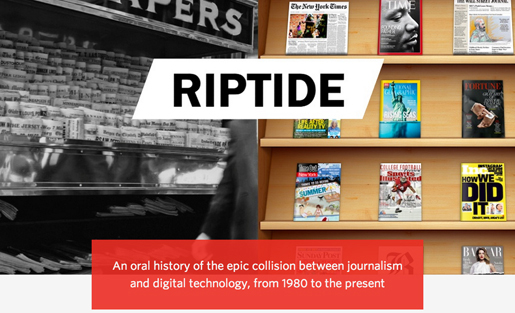 The Riptide report included exhaustive research and interviews with 61 pioneers in the media and digital space. What emerged was a series of mistakes that traditional media made in the digital maelstrom.

This was not a stellar week for the tech media world. The Riptide project was an in-depth look by news pioneers at early efforts by traditional media to adapt to the rising tide of disruption — and how they failed. The trio of researchers interviewed 61 people, many key players in the early days of the web, including Google’s Eric Schmidt, AOL’s Steve Case and Twitter’s Dick Costolo. But the project was vilified for including 54 interviews of white men, with few people of color or female voices. It wasn’t the only slight for women in tech: Business Insider CTO Pax Dickinson was fired for a stream of offensive tweets, while the TechCrunch Disrupt hackathon produced two inappropriate presentations, including for an app called TitStare. For this show, our special guests include two of Riptide’s authors, Paul Sagan of Akamai and John Huey, formerly of Time Inc., as well as Andrea Peterson, tech policy blogger for the Washington Post’s The Switch. MediaShift’s Mark Glaser will host, along with regulars Monica Guzman of Geekwire and Seattle Times, Andrew Lih of American University and Ana Marie Cox from the Guardian.

John Huey is the former Editor-in-Chief of Time Inc. Huey oversaw the editorial content of more than 150 magazines, including Time, Fortune, People, In Style, Sports Illustrated, Entertainment Weekly and Real Simple. He was also responsible for the editorial content of the Time Warner’s websites and brand extensions. Prior to becoming editor-in-chief, he served as an Editorial Director of Time Inc. since 2001. Previously, he served as the Managing Editor of Fortune since 1995. He joined Fortune in 1988. Under his leadership, Fortune was named to Advertising Age’s list of the best magazines in both 1999 and 2001.

Paul Sagan is Executive Vice Chairman of Akamai Technologies. Sagan was elected to the Akamai Board of Directors in January 2005, and he became CEO in April 2005 and served as chief executive until 2013. Sagan is a director of Massachusetts-based EMC Corp. and iRobot Corp., and he served as a director of Dow Jones & Company, Digitas Inc., and Maven Networks before they were acquired. Previously, Sagan served as senior advisor to the World Economic Forum from 1997 to 1998, and from 1991 until 1997 he held a number of management positions at Time Warner, including president and editor of new media at Time Inc. from 1995 until 1997. He was a founder of Road Runner, the world’s first broadband cable modem service, and Pathfinder, one of the early web properties that pioneered Internet advertising. Sagan joined Time Warner Cable in 1991 to design and launch NY 1 News, the television news network based in New York City.

Andrea Peterson covers technology policy for The Washington Post, with an emphasis on cybersecurity, consumer privacy, transparency, surveillance and open government. She also delves into the societal impacts of technology access and how innovation is intertwined with cultural development. Peterson was previously a tech reporter for ThinkProgress, and her writing has also appeared on Slate and Science Progress

1. Riptide project explores the past, takes hit on lack of diversity
The Riptide Project at Nieman Lab had all the promise in the world, with three distinguished authors looking back on the history of digital disruption to the traditional news industry. What happened? What went wrong? What could have been done differently? And indeed, it is an in-depth chronicle of just that, with text, videos and eyewitness accounts. But the report spends more time on players that have waned and much less time on players that have risen (i.e. non-profit news, crowdfunding, etc.), and was immediately criticized for an overwhelmingly white male perspective on what happened. What were the key lessons of the report? What could the authors have done differently? Is there a follow-up report in the works? And what about Mathew Ingram’s critique that the major players escape without blame?

The tech and media industries have always had a problem with diversity and advancing women into positions of power. That was more evident than ever this week when Business Insider’s Chief Technology Officer Pax Dickinson was fired for a stream of sexist, racist and outright offensive tweets were ridiculed in the Twitterverse. One salient tweet from the past: “Tech managers spend as much time worrying about how to hire talented female developers as they do worrying about how to hire a unicorn.” As Slate’s Amanda Hess wrote: “It’s perplexing why Business Insider would employ someone as openly racist and sexist as Pax Dickinson is, but it’s positively mind-boggling that Business Insider hired a CTO who doesn’t even understand that the Internet is real life.” Adding to the sexist content, a hackathon at TechCrunch included two Australian entrepreneurs presenting a new app called TitStare, which led to an apology from the conference organizers and more finger-pointing in the male-dominated industry.

Should media companies filter applicants by looking at social feeds? Does this limit what people might say openly or close off unpopular speech in some way? And what about the hackathon format, where people build things on the fly?