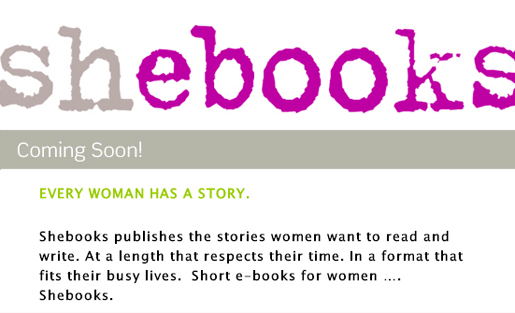 Shebooks is an online publishing platform geared specifically for females.

While attending industry events, Laura Fraser started to get excited by the newfound focus on longform journalism models and startups like Byliner and Atavist trying to distribute more in-depth reads to the masses. Yet when she took a closer look at who was behind the efforts, a realization hit her.

“It’s all the same guys,” she half-joked to a crowd of female media entrepreneurs at a recent New Media Women Entrepreneurs event put on by J-Lab.

“Be strategic in your partnerships. They have to bring money or credibility to the table, even better if they’re bringing both.” -Michele Kayal

Figures show that women are much more the book-buying types than their male counterparts. Women purchase 66 percent of e-books, and 64 percent of the overall books sold. Amid all of these longform and e-book publishing efforts, however, Fraser said none are squarely aimed at this influential female bloc. Add to that the fact that female writers and journalists continue to be published less frequently in longform, essay-driven magazines like The Atlantic and Harper’s Bazaar, according to Fraser‘s counts.

These discoveries led her to join forces with two other women, Peggy Northrop and Rachel Greenfield, and launch Shebooks, with a tagline of “Every woman has a story.” Its mission is to publish 18-20 original e-singles — about 10,000 words each — per month for and by women. Shebooks will do a 50-50 revenue split with the authors, who are both established and emerging.

Offering monthly subscriptions is one key product differentiator, according to the founders. But the other secret sauce? High-level partnerships.

Already they have a promotion lined up with Good Housekeeping. An editor’s note in the next issue will announce a contest in which Good Housekeeping readers are invited to submit memoirs for a chance at prize money. All contest entrants pay a $15 fee and get a free two-month Shebooks subscription, both of which will provide marketing and money assistance to the startup early on.

For many female-led media ventures and startups — no matter the size and niche — one striking commonality is the effort devoted to partnerships, especially as the companies are working to gain traction. These aren’t just loose blog networks that some news organizations have enacted to be able to produce more posts and share in bloggers’ traffic.

Female media entrepreneurs are forming partnerships earlier, more strategically and with more creative pairings in mind. And reaching out is really viewed as a critical component of their long-term survival and their concrete plans to grow revenue and users.

Take newly created culinary startup American Food Roots. The founders are four self-described old-school journalism veterans who set out with their digital product to tell the story of food in this country. The site has slideshows, essays, recipes and even a 50-state interactive map of food tales grouped geographically.

American Food Roots has only been in existence since December yet already the partnerships, contributions and relationships with other content creators and food entities are piling up.

“There’s a reason it’s called the web,” co-founder Michele Kayal said during the J-Lab summit, which took place at the National Press Club last week. “The more connections you make the more it leads back to you and the better off you are.”

Some of these connections include reaching out to food celebrity Eddie Huang, who agreed to be interviewed even though the startup was brand new. The interview ended up bolstering web traffic, as well as being featured on MSNBC and other major outlets upping the brand’s exposure greatly.

“Be strategic in your partnerships,” Kayal said. “They have to bring money or credibility to the table, even better if they’re bringing both.”

For the money piece, she suggests “catching another rising star.” For instance, American Food Roots’ founders discovered that one of the Smithsonian museums had a food exhibit and were able to arrange to film video food memoirs there. Deals like this will make it possible for the startup to secure lucrative sponsorships both on the site and at forthcoming food-inspired events.

For news non-profit St. Louis Beacon, events have been a key revenue driver — accounting for 18 percent of the total revenue pie — and a way to build up key partnerships as well. General Manager Nicole Hollway has taken chances on unique partnerships that have worked out as profitable and influential community events.

For one, the non-profit teamed up with the Missouri History Museum on a year-long partnership on race including events and coverage. “Beacon & Eggs” were panels of neighborhood business leaders sharing valuable insights. The panels brought together community members, earned money and spurred some exciting reported stories.

By going beyond just writing articles, St. Louis Beacon has come to view itself as something distinct from a newspaper or other standard publication.

“We started to act as a community asset and people started saying it back to us,” she said.

At this point the digital publication has not taken any advertising. Besides events, revenue comes from a group of 300 high-dollar donors and foundation support. Going forward Hollway said she suspects her company will continue to thrive off of sources “born out of content.” This means increasingly hybrid sponsorship tactics — and a reliance on partnerships and a connection to other community groups — is the way.

The idea really boils down to startups and new media ventures not operating in a vacuum. Reaching out to the community or other organizations that serve the same niche can provide boosts, both financial and in terms of reach.

“You have to be an enterprise that touches people at all their sensations,” Kayal said. “Think of it in a holistic context.”