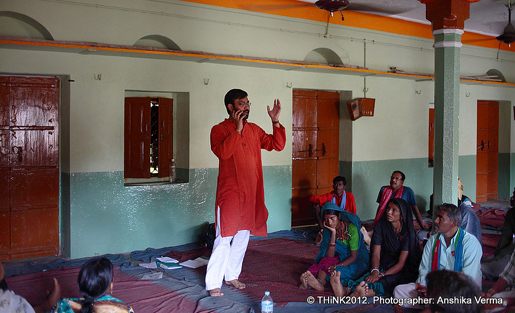 Bhan Sahu was living a quiet life in the Indian state of Chhattisgarh. A high school graduate, she has two children. “Life was all about looking after my children and taking care of the family,” she says. Today, Bhan Sahu is a proud homemaker and a journalist whose investigative skills are feared. She started with the CGNet Swara news site and is now an active reporter with the Video Volunteers project as well.

CGNet Swara is not your usual news channel focusing on news and information. It also ensures that the audience is one that will understand what being tribal, unwanted and displaced is all about.

“For mainstream media, getting the local flavor is difficult because most don’t know the Gondi language...In areas where tribal populations dominate there was no tribal news media.” -Shubrashu Choudhury

Working on a simple premise that content is most effective when produced by those who are its most immediate audience, its coverage ensures that it’s more than just working along the principles of being “media for and by the people.”

Set up in February 2010 by Shubrashu Choudhury, a former BBC journalist, CGNet Swara was for the people of Chhattisgarh, a beleaguered state whose living standard is among the poorest in the country. Thickly forested, Chhattisgarh has rich reserves of minerals but lacks basic school and health facilities.

Chhattisgarh may provide about 15 percent of steel produced in India, but it’s mostly in the news due to the violent Maoist activities that have come to characterize the state today.

Funded as part of a Knight International Fellowship project, the project has technical assistance from the Massachusetts Institute of Technology.

“CGNet Swara is for the residents of Chhattisgarh,” Choudhury said. “They need to have a credible news source manned by journalists who know the language and culture of the land. Journalists stationed in the region aren’t from the state and often don’t know the language or the nuances of culture.

“For mainstream media, getting the local flavor is difficult because most don’t know the Gondi language and translation isn’t always enough,” he said. “In areas where tribal populations dominate there was no tribal news media.”

Being an Internet-based voice portal, it doesn’t require literacy, and people who have a story call designated numbers through a land or a mobile number and record their narrative. Voice prompts guide users on the site. Professional journalists who volunteer for the site then access these recorded pieces and fact-check them.

Registered users are then notified that a new story is available on the site, and they can log on to either listen to the story or read it on the site. Only about 1 percent of the population had access to Internet here until cheap mobile connections improved access to seamless connectivity. The news is in Hindi and Gondi, languages spoken in the region.

But what actually makes CGNet Swara different from other citizen’s journalism projects in the country is the way it has managed to encourage women to participate in the news production process.

“We didn’t even actively promote it among them,” Choudhury said. “When they joined, I thought they would talk about the patriarchy they have to live under and issues very personal to their situation.”

Instead, the women took up themes that even the mainstream media in the country doesn’t highlight. Sanika Munda’s report on the witch-burning issue is a typical example. She did a story on how Hudungi Devi from Hudung village was burned as witch. The police did nothing in spite of repeated complaints. Munda’s report ensured that the National Human rights Commission stepped in and promised to amend matters.

Today, CGNet Swara has nearly as many women reporters as men.

“Since this isn’t a paid position and they work on their own, we don’t have exact numbers,” Choudhury said.

Bhan laughs when called an “investigative pro,” but there is no hiding her pride at her story that exposed the exploitation of children in the tendu leaf industry in her area. This leaf is used to make an inexpensive Indian cigarette called the beedi. “They were employing children simply because they didn’t have to be paid as much as adult workers and because they were too sacred to protest at the overtime they were forced to do,” she said. The National Commission on Child Rights was moved to ensure the removal of children from the job.

Learning on the job

Some amount of training is given, but most people learn on the job. Choudhury, in conjunction with different non-governmental organizations, trains reporters in different parts of the country and has taken the concept of CGNet to beyond Chhattisgarh.

That’s how Deepti in Bhopal found the perfect outlet for her story on how some workers in the Mandla district hadn’t been paid for four months. This ensured that officials at least took notice of unpaid wages.

But CGNet is also about entertainment, and some people call and record songs and stories of their regions. Archana Yadav from the Bitaul village in the Rewa district recently recorded a Kajali song.

Mainstream news and television programs often take up the issues that the CGNet Swara reporters focus on. While most are quick to follow the leads provided, they are yet to start syndicating and paying for content. Choudhury knows he will have to find a sustainable business model for the project. Advertising on the site and partnerships with health and forestry departments are ideas he is considering.