Inside Vox Media’s Attempt to Build a Modern Media Stack 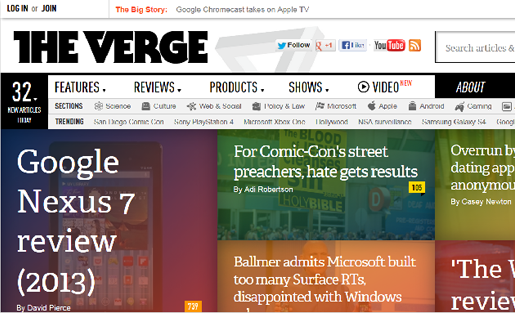 Vox Media, the parent company behind tech website The Verge, gaming site Polygon, and sports site SB Nation, is a hybrid media and technology company that tightly integrates its coverage with internal software development. They produce original reporting on these topics, but they also produce software products to support that reporting. Internally, their product team refers to this configuration “the modern media stack” (as in a software developer’s solution stack).

Vox is a relatively recent (2003, although The Verge and Polygon were launched in 2011 and 2012, respectively) and successful (hosting millions of visitors per day during major live events) media company. Its structure and approach to journalism could offer guidance to other news companies, new and old, as they work to find the right balance online. I recently had the chance to interview Nilay Patel, managing editor at The Verge (formerly of Engadget), and Chris Grant, editor at Polygon (formerly of Joystiq). What follows are highlights from those conversations (including my own observations). A second post will follow to explore in greater depth how Vox’s teams cover major live events.

"Vox's structure and approach to journalism could offer guidance to other news companies, new and old, as they work to find the right balance online."

Develop native tech, if you can

Vox’s properties live and die not just by their consistent output and the quality of their reporting, but also the consistency and quality of their websites and apps. Patel believes that media companies’ ability to build their own technology will be a critical factor in their success or failure. This opinion contrasts with the belief that the rising tides of third party platform development (e.g. Medium) will allow the best content to rise independently of its authors’ investment in their tech. This debate is far from over, but from the perspective of a media company, Patel has a point. The editorial team that would later launch The Verge gathered together on a WordPress blog called “This is My Next” to continue writing after they left their respective publications. The Verge was launched on Chorus, their own content management system. And Gawker Media, for example, is investing heavily in its own commenting and publishing software.

At the recent conference hosted by MIT’s Center for Civic Media and the Knight Foundation, my friend and 2012 Knight Mozilla OpenNews Fellow Dan Schultz gave this advice to newsrooms with legacy CMSes:

I’d suggest that you take all of your developers, and a bunch of straws, and they draw straws, and whoever gets the shortest one is the only person who’s going to be responsible for the content management system, and everyone else gets to be a newsroom developer.

Whether it’s dealing with a legacy content management system or attempting to produce high quality web video while also filing a story, many of today’s journalists face uphill battles completing tasks which they may not be the ideal person to execute.

Over the last decade, news companies have been forced to compete with an entire world of content produced by unpaid freelancers and bloggers, and one result has been a realization of just how expensive the human beings on payroll can be. Vox’s in-house technology improves the content production and publication experiences for some of their most critical users: their own writers. If everyone at Vox shares the experience Grant and Patel shared with me, this translates to the production of more content with fewer technical headaches for reporters.

Follow the evolution of wildly successful social media platforms over recent years, and you’ll see a downward trend in the threshold required for the average user to create content. Facebook and e-commerce companies sometimes refer to the barriers between users and desired actions (sharing or purchasing, respectively) as friction. From Tumblr (dead simple blogging) to Twitter (microblogging) to Instagram (photo as status update, and little else), these companies have drastically reduced the barriers between having a thought and expressing it on the web. Vox develops its internal software by listening to their own teams of reporters.

So what are these magical products?

The company wouldn’t share sandbox accounts or even screenshots of the software with me, so we have to take it on their word that it works well. But they did develop these products in direct response to internal need for better solutions. Syllabus, the company’s in-house live-blogging tool, was built in 3 months after the team identified the need for a product that could handle the crazy traffic The Verge and Polygon host for major industry events. Grant told me that Syllabus shines because it’s fast, and allows the live teams to pump out headline news quickly, a critical feature in such a competitive environment.

The tool basically allows a single reporter or blogger to quickly build complete editorial features spanning a variety of related news from a live event. One or two other people can then properly synthesize and prioritize the large amount of information coming out of live events to help readers parse everything.

People are overwhelmed by information; help them organize it

Grant and Patel are aware of the balance between quantity and quality of content. When Apple’s announcing a new iPad, The Verge needs to get all of the details and get it out to their readers quickly. At the same time, their simplified content production and layout tools free up time for more in-depth feature pieces, even during events.

Chorus is the content management system Vox has designed to improve reader experience. Story streams act as taxonomies of news.

For example, Vox introduced the concept of “tentpoles,” which allow editors to fluidly organize content by emerging themes (especially during live blogs, where the important bits can easily get lost). Grant told me that Chorus story streams allow their writers to essentially produce microblogs by topic, like this week’s Google conference.

Topic pages (e.g. http://theverge.com/Android) are as well-designed as any other homepage, rather than just a list of articles tagged ‘Android’.

Vox plans to win their content verticals by putting out the best stuff, rather than count on romantic notions of reader loyalty. The battle for spiky live-blog traffic and the nomadic behavior of gaming and tech readers spare Vox the illusion of reader loyalty once enjoyed by mainstream news companies enjoying geographic monopolies. The company was born in an era when, if your site goes down due to record-breaking traffic, your readers have probably already found an alternative solution by the time you’re back up.

It’s OK to geek out

Bloggers have long held the advantage of writing only about that which they are passionate. Newspapers and other legacy media formats offer a package of content that’s referred to as “a mile wide and an inch deep.” So no matter what your passion is, you’ve probably experienced a moment where you see a newswire blurb on a major development in that space, only to read the entire article and end up thirsty for much more detail. We struggle to keep up with the breadth of The Economist each week, until they cover a topic we know intimately, and suddenly the news magazine’s coverage seems superficial.

This is why Google passed on Patch, according to Richard Gingras, head of Google News. Patch, eventually acquired by AOL, produces hyperlocal content and is interesting for lots of reasons, but their general strategy was still to replicate the local newspaper’s generalist, one-size-fits-all coverage of local geographically-defined communities. The web doesn’t quite work that way. We dig deep into things we’re excited about, because we can (as French media startup Mediapart has found in its success posting full primary documents and lengthy feature pieces for passionate political readers).

Shop at thriftstores, but only buy designer clothes

This is how Vox describes their use of resources. They’re proudly opportunistic — if a major event comes up that could put their relatively young websites on the map, they’ll invest heavily (by sending the entire team) to get the most out of it. They take pride in producing content nimbly, but with high production values.

The goal is to stretch their budgets, but without ever sacrificing quality due to cost. An example of this philosophy in action is Vox’s video team. The video team produces high quality video on extremely fast turnaround time, but they also support all three of Vox’s properties, so the brands can benefit from economy of scale.

CORRECTION: An earlier version of this story had the two services confused, saying that Chorus was the live-blogging tool and that Syllabus was the CMS, when the opposite is true. The story also said that The Verge was launched on WordPress, when it was really launched using the Chorus content management system. We regret the errors.