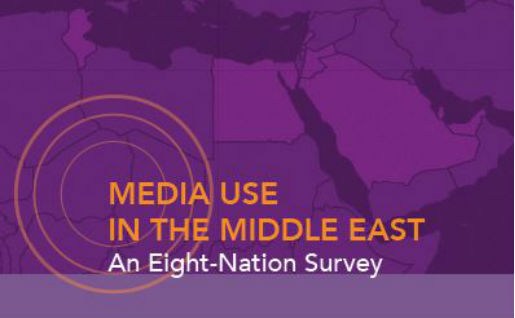 The cover of a recent study from Northwestern University in Qatar.

Among the younger generation in the Middle East, Internet use is surpassing TV, and that could have long-term implications in the region. And that increased engagement online comes with important, unresolved questions about media regulation online, according to new research by Northwestern University in Qatar. The study paints an in-depth picture of the role of the news industry in the Arab World with responses from 10,000 people in Lebanon, Tunisia, Egypt, Saudi Arabia, Bahrain, Qatar, Jordan and United Arab Emirates.

“Continuous focus on the conflicts and controversies of the Middle East affords little attention to the steady and growing media sector in the region, which has an amalgam of traditional and new platforms,” Northwestern University in Qatar Dean and CEO Everette Dennis writes in the introduction of the study.

"It's not totally surprising, but it's a little bit odd in the juxtaposition of the Arab Spring" -Everette Dennis on his study's finding that the Middle East values regulation of speech online

Television continues to be the primary source of news for most of the Middle East, with 98 percent of respondents saying they watch TV on a regular basis. In an interview, Dennis attributed that to the popularity and availability of TV for lower-income families. Newspapers are seen as an exclusive medium for upper class readers and as such aren’t as well read, he said.

Internet is growing significantly (two-thirds of respondents use the Internet) and could overtake TV as a dominant form of media in the Middle East, especially among younger respondents. Eighty percent of that access is over wireless connections, mainly via smartphones and laptops, indicating there is a digital divide that leaves lower-income earners with less access to the Internet. Tablets have a much smaller market share that’s even dwarfed by Internet access via standard cell phones.

The study reveals contradictory findings on sentiments regarding freedom of speech online. On the one hand:

But the idealism is tinted with fear:

Yet even as revolutionary movements in the Arab Spring paint a narrative of demands for free speech, “Half (51%) of the participants in the study believe there is not enough awareness of the ‘laws, regulations and moralities that control one’s activities on the internet’, and, perhaps consequently, half (50%) also feel the internet in their country should be more tightly regulated than it is now,” according to the study (emphasis added).

That paradox is highlighted in age, too. Younger respondents expressed interest in expressing and regulating opinions online more often than their older counterparts did.

“It’s not totally surprising, but it’s a little bit odd in the juxtaposition of the Arab Spring,” Dennis said.

Dennis said it’s possible certain speech, especially religious, is considered more appropriate for regulation than other types, but the survey did not explore this differentiation.

Media producers in the Middle East can celebrate this fact: More than 60 percent of respondents to the survey said that “the quality of news reporting in the Arab world has improved in the past two years.”

There are a number of reasons for that:

However, there’s also room to improve. Fewer than half of the respondents believed news outlets in their country were credible, and even fewer respondents than that believe journalists can report without interference from officials.

The study also raises a number of opportunities for further research. The study’s authors, including Dennis, expressed interest in studying “advertising in a region where state-sponsored and subsidized media live alongside more independent news organizations online.” Dennis also expressed interest in studying the creators of media in the Middle East.

Read the full study here: Media Use in the Middle East

You can explore the charts of the study in this great interactive online.