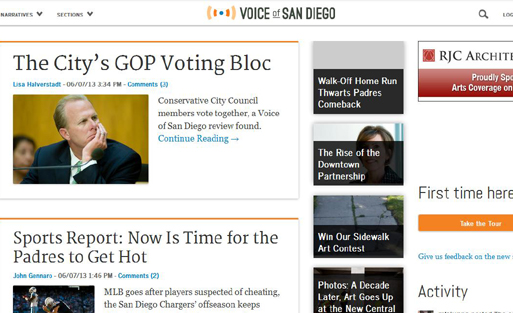 The Voice of San Diego, one of the oldest of the new guard of non-profit news orgs, has been around since 2004.

A new study of non-profit journalism sites declares that “achieving revenue diversification…is still a formidable task” for the sector, which reported devoting only 10 to 24 percent of staff hours to business development.

There are few surprises in the latest non-profit journalism study by the Pew Research Center’s Project on Excellence in Journalism. There are still, however, many questions to be asked. And there is much merit in taking a deeper dive into discrete clusters of non-profit news sites.

"Many in the non-profit journalism world have attended well to telling news stories in their topic areas. But they have not devoted time and attention to compiling data on audience engagement and community impact."

The study cites increased competition for grants, fewer follow-up grants awarded by seed funders and a “non-profit culture that prizes program spending over business development” among the key challenges for non-profit news operations.

I see a few more challenges, but I also agree with the 81 percent of sites who expressed optimism that they will be financially solvent in five years. Most said they had brought in more money than they spent in 2011 and had some cash reserves on hand.

Among the key challenges cited in the report:

In most cases, foundation funding accounted for more than half the sites’ total revenues. Donations from individuals, advertisers or sponsors, events or syndicated content comprised much smaller income streams.

The Wisconsin Center for Investigative Journalism was the first to report on the economic and environmental impacts of a boom in frac-sand mining in Wisconsin.

While any information on the emerging non-profit news landscape is welcome, PEJ’s efforts to draw sweeping conclusions from such a disparate pool of subjects complicated its task. Included in its study of 172 non-profit news operations were sites that had been around for less than five years to those that have survived for 25 years; there were micro operations that bring in $50,000 year and those generating $1 million or more in revenue. It’s hard to compare the long-lived Pew-funded Stateline.org with a site such as Wisconsin Watch, which was threatened to be removed from the University of Wisconsin last week by some state legislators. As well, PEJ’s study encompassed an almost-incompatible mix of sites from statewide investigative news outlets to hyperlocal community news sites, and niche sites on health or arts and culture.

Zeroing in on discrete sectors of either non-profit or for-profit sites in future studies might surface new trends. Health or arts sites, for instance, can draw from entirely different revenue opportunities than statewide investigative news sites. Are the investigative news sites (there are now some 80 members of the Investigative News Network) moving to take ads from government agencies, lobbyists or candidates for office? Are non-profit news sites taking steps to accept sponsored content from local retailers, law firms, or health care providers? Targeting discrete clusters of sites might help unpack the secret sauce that has enabled such sites as New Haven Independent or Voice of San Diego to be around since 2004.

Nevertheless, among the study’s highlights:

One of the business weaknesses I have observed among entrepreneurial news startups is the failure to develop their own master narratives. Building a brand is important for any enterprise. Many in the non-profit journalism world have attended well to telling news stories in their topic areas. But they have not devoted time and attention to compiling data on audience engagement and community impact that would help them craft compelling narratives about their own efforts. These are the stories that can elicit more enduring support.

It is crucial, noted Kevin Davis, CEO of the Investigative News Network, in the report for these sites to have “a brand that your target community appreciates and supports.”