Digital Mags Can Be More Local, and More Global, Than in Print World 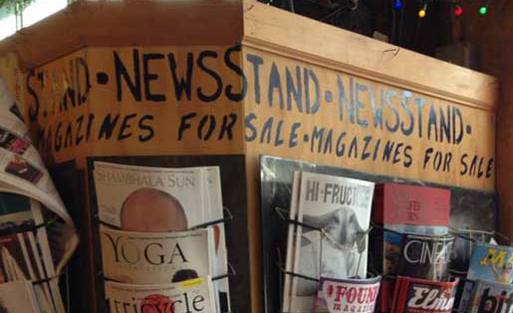 The magazine newsstand at Blue Scorcher Cafe & Bakery in Astoria, Ore., could take digital form with a new app.

For magazine lovers, traveling used to mean loading up on print editions to read on the road, and then packing up exotic publications as souvenirs to bring home. Your location really mattered for magazine selections when print was the only way to get publications from specific places.

Today your location still matters — except when it doesn’t. New digital magazine apps let you unlock new magazine experiences by being in the right place at the right time, or subscribe to global publications without regard to national borders. These apps’ creators want to free magazine readers from geographic constraints, customize their reading experiences, and revitalize public reading with digital tools.

“Many publishers sign up with [Magzster] because we can bring consumers around the world. Niche titles like gardening or cooking, lifestyle, entertainment, all sell a lot outside their geographies.” -Vijay Radhakrishnan

A map of some of Foli’s locations in the Bay Area.

It’s one of the biggest cliches about reading magazines in public: that outdated, dull selection of magazines at the doctor’s office. Startup Foli wants to kill that cliche and reinvent the public magazine reading experience. Foli co-founder and CEO Henry He saw the growth of tablet devices as an opportunity.

“You have a stack of magazines there in the doctor’s office, the print Wall Street Journal in the hotel, the USA Today…All this market will sooner or later go away in paper format,” He said in an interview.

Foli, currently available only as an iPad app, enables visitors at participating businesses to open the app, view a custom newsstand, and read digital magazines selected by the business. These might be consumer magazines (largely PDF-style replicas), but businesses can also include their own publications.

Foli’s newsstand in trial mode, which allows for an hour of free reading anywhere.

For example, He said, a hotel could include its restaurant and bar menus, as well as its own magazine (as did the Four Seasons Silicon Valley). Content can be updated daily to display the business’s news and events, and can be customized for the business’s typical customers. Other businesses using Foli include coffee shops, hair salons and spas.

“We immediately focused on the hospitality sector because we believe that if people travel, they’re going to carry the iPad with them,” He said.

He says that people who read magazines using Foli average an hour of engagement with the app. And if you’ve ever been tempted to tear a page from a magazine at the salon, or frustrated that the doctor was ready to see you before you finished reading an article, Foli has a solution. You can add articles and multimedia from magazines accessed through Foli to your own in-app digital collection to read elsewhere later, using “credits” to save each piece.

“Our long-term goal is to be everywhere a paper book or magazine used to be,” He said, changing what it means to provide and read magazines in public places.

While location is everything for Foli users, location is increasingly irrelevant because of apps such as Magzter. Magzter, available for multiple platforms, offers 1,700 magazine titles to 8.5 million users, according to Vijay Radhakrishnan, co-founder and president of Magzter. He said these users are distributed widely, with 2 million in the U.S., 2 million in the U.K., 3 million from Asia and 1.5 million from the rest of the world.

Magzter’s biggest recent coup was announced in April: a deal with Hearst to offer Hearst magazines, including all of its U.S. editions and a selection of its international publications, through its service. Magzter takes a 50 percent revenue cut from publishers’ sales, significantly more than Apple’s 30 percent, but also can collect and share more valuable reader data with publishers than Apple does. Magzter offers mostly digital replicas through its service, though some magazines include interactive features.

“Many publishers sign up with us because we can bring consumers around the world,” Radhakrishnan said in an interview. “Niche titles like gardening or cooking, lifestyle, entertainment, all sell a lot outside their geographies.”

Some international readers are seeking out magazines from their home countries, in what Radhakrishnan calls a “diaspora effect” on readership. Others are just intrigued by international publications.

The Indian edition of Harper’s Bazaar is available through Magzter, along with many other international magazines.

“They’re curious people…Let’s say, a cooking magazine on Indian cuisine — it’s selling a lot outside India. It’s not a diaspora. It’s people who really want to get into Indian cuisine, maybe citizens of the U.K. who want to learn Indian cuisine,” he explained.

Magazines published in English can easily find interested readers around the globe. Some topics are relevant and universal for a global audience, and publishers using Magzter can access that worldwide readership. Radhakrishnan says “fewer than 10” of Magzter’s titles carry geographic restrictions on subscriptions.

As these apps show, magazine reading can now be more local, and more global, than in the print-only world. These new capabilities point to the growth possibilities for both custom digital publishing for businesses wanting to generate their own magazine-style content for apps such as Foli, and for universal, globally relevant magazines that can address a worldwide audience through apps such as Magzter. And magazine fans can get to know individual places and be global readers, without packing up a stack of paper magazines in their suitcases.

2 responses to “Digital Mags Can Be More Local, and More Global, Than in Print World”