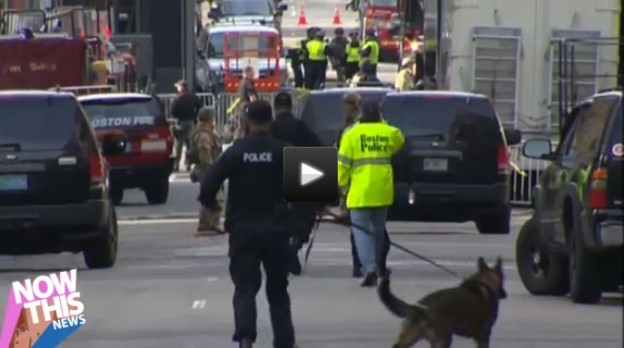 Typically, web content flows from a website into social media and mobile apps. NowThis News, founded last September by veterans of Huffington Post, anchors its content in its mobile apps. Original videos, in digestible lengths and narrated by young voices, stem from iOS and Android apps and flow to a minimal website and the network’s social media pages, and through its distribution partnerships. NowThis News has already formed partnerships with BuzzFeed, MSN, Forbes, The Atlantic, Mashable and the Columbia Journalism School.

"It’s been a unique challenge here at NTN to think about the video we’re creating specifically for a mobile audience with the intent of it being shared. It changes everything." -Ed O'Keefe

Ed O’Keefe spent 12 years moving up the ranks at ABC, going from desk assistant to executive producer of ABC News Digital, helping to integrate ABC with Yahoo News. He left to join the early version of NowThis News last year, known as Planet Daily, as editor in chief. In a Q&A conducted via phone and email, O’Keefe explained the forward-thinking news operation he’s leading. The following is a lightly edited version of that conversation.

How does NowThis News (NTN) work? Who creates the videos, and where do you find the news?

Ed O’Keefe: NTN is the first news and information network dedicated entirely to mobile with distribution primarily on social. NTN produces entirely original videos every single day. We started producing videos in mid-September of 2012, and we’ve done almost 1,700 videos to date. We’re generally producing 18 to 25 videos a day. In that batch of 18 to 25 videos a day, we might do five or so “bounce” or “second-degree” stories. For instance, we published a primer piece on North Korea and why they hate us, which is obviously pegged to a lot of the events that have been happening in the Korean peninsula.

Our point of pride is to try to make the complex simple, to break down both the news of day into the compelling parts that you absolutely, most want to see, but also try to acknowledge that the millennial audience in particular is going to 25 to 30 different sources of information every day. We want to take a view that allows them to understand the news a bit easier, better. We’re dealing with a tone, a style of presentation that is very, very far from the standard approach of traditional networks and cable.

For your partnership with The Atlantic, are you making videos for its stories? What about its mobile content?

O’Keefe: Essentially, we work very closely with their talented video team to take a look at what they have upcoming in their future magazines. We take a look and maybe of the 15 or 18 stories they may have in a particular month, we would pick one or two or three, four, a handful, that we think might be compelling enough from a visual-storytelling perspective to attempt to do a video. So we won’t do everything, and we try to work collaboratively with them to decide which stories have the best potential to create compelling visual storytelling. It’s been a unique challenge here at NTN to think about the video we’re creating specifically for a mobile audience with the intent of it being shared. It changes everything. It changes how you structure a piece. It changes the visuals that you use in a piece. It challenges you to think about the graphics that you’re using, the style of presentation, the pace, the length, the types of post that we use. So I don’t know that it’s necessarily about one partnership over the other; it’s about how our approach is coming to every partnership.

What do you have planned for Vine?

O’Keefe: We love Vine. NTN is trying to prove that you can have substantive and good-looking, high-quality news content in short amounts of time. Six seconds might be a challenge to tell certain stories, but I love the challenge that it provides. It sort of meets the moment of this generation, which is trying, with stylistic approach, to condense information down to the bare essentials. Drake Martinet and the social team employ Vine on a daily basis. If there is a way for us to tell a story purely through social, then we do it. And if the best mechanism to do so is Vine, we will do so. We don’t consider it a marketing tool or a gimmick or just a sideline thing we happen to do in our spare time. It’s truly in the arsenal of social tools for storytelling.

How did the partnership with Columbia Journalism School start up?

O’Keefe: They actually reached out to us. Professor David Klatell, who is a former academic dean at Columbia, has been doing this class for a number of years. Its primary focus in past years was to think primarily about the evening news. This is actually the first time that what was formerly “Reinventing Television” is now “Reinventing Journalism” and focused on a startup. The students of this particular class have been given confidential access to everything we have been doing. They get to come into our newsroom, meet our producers, talk to all of the senior management. They get to see from the ground up a startup trying to challenge traditional journalism. What convinced me that NTN was the right move for a 12-year veteran of traditional broadcast is that news is a growth industry. I think that’s an important message to be conveyed throughout journalism, and a big reason we’re doing this with Columbia.

What was the NTN office like while the Boston Marathon bombing unfolded? What was the strategy for covering this breaking news?

O’Keefe: NTN leapt immediately into action, booking Cyrus Moussavi (@cyrusvj), one of our VJs, and Connor Boals (@cboals), one of our producers, on the 4 pm [train] to Boston. They remained on the scene all week, even filing field reports via iPhone just 10 feet from the ambulance which carried away the captured suspect.

We also wanted to do what we do best: break the complex down into the simple in concise, smart, and social-friendly video. We accomplished those goals with highly social pieces that drew, in total, millions of views — one example of which is something like this:

But, most significantly, NowThis News turned to social both as a means of distribution — and as an outlet for information. On Facebook, we wanted to translate the piece “Tick Tock: Essential Moments from the Violent Shoot-Out to Dramatic Capture That Ended a Manhunt” into something incredibly viral so we continually updated this graphic, which was shared tens of thousands of times in multiple updates:

We are dedicated — not just in breaking news circumstances, but on every story — to asking two questions of every video we produce: 1) Is it watchable on a mobile platform, and 2) Is it social? If it fails on either of those two criteria, we don’t produce it.