#ISOJ 2013: How News Organizations Can Adapt to Digital Disruption 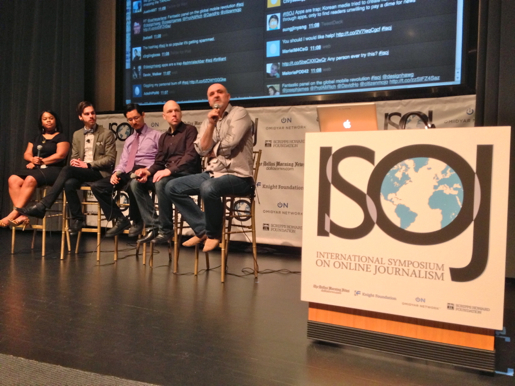 That was the message late last week at the International Symposium on Online Journalism hosted by the Knight Center for Journalism in the Americas at the University of Texas at Austin, where about 370 of the world’s journalists, researchers and media watchers grappled with the hard questions for a beleaguered traditional media industry that is now more than a decade into its disruptive transformation.

The problem is many media companies view digital technologies through a lens of traditional journalism and thus, fail to strategize properly, said Clark Gilbert, president and CEO of Deseret News Publishing Company.

“In a post-disruption world, why would people pick up a paper at all? Why would someone turn on the 10 o’clock newscast?” Gilbert asked. “If you are not asking those fundamental questions, there is not a future for you legacy organization.”

“The possibilities are endless for the ways that we can bring stories to our audiences today,” said Jill Abramson, the New York Times executive editor and an ISOJ keynote speaker.

Prior disruptive situations for the press entailed the telegraph, radio and television, which fundamentally changed the profession. In his talk, Gilbert characterized digital technologies as an external challenger. Interactivity diffuses the press’ information authority, helping to create a Post Industrial Journalism, as suggested in a white paper published by the Tow Center for Digital Journalism at Columbia University.

In the lifecycle of disruption, an established business eventually loses the ability to grow because of the competition from the disruptor entity, Gilbert said.

“Despite the incredible changes we’ve seen in media, we still treat the news as a one-way street,” said keynote speaker Andy Carvin, the senior strategist on the social-media desk at NPR. “We need to rethink what it means to inform the public.”

(You can read the entire transcript of Carvin’s speech here.)

The good news, Gilbert added, is that a path to survival exists.

That path depends upon the company focusing on what it is good at, repositioning for that niche and getting costs in line with the post-disruption world.

David Skok, the director of digital at Global News in Canada, said journalists at his company must conceptualize every story as ongoing, every beat as a site and every author as a brand.

Jim Brady, editor-in-chief of Digital First Media, urged news organizations to avoid duplication of efforts within the company. Use any freed-up resources to do more in-depth data work or content curation.

Chris Courtney, mobile product manager for the Tribune Company, always asks “what problem can this solve?” rather than “what feature does this bring?”

Does your site design respond to the time, location and customized information for each user? asked Travis Swicegood, director of technology for Texas Tribune.

There was a session during the first day of ISOJ about responsive design.

“We need to be responsive not in a technical sense but a personal sense,” Swicegood said. “How do I respond to this particular user?”

Take advantage of digital tools as a way to revolutionize journalism but stay true to storytelling. Abramson pointed to Snow Fall, the Pulitzer-Prize winning feature package as a “new organic way of reading” that helped people experience an avalanche alongside the skiers in the story.

“There are certain stories that I think are made for this kind of rich narrative multimedia storytelling,” she said. “In general those are ones that have intense characters, that have a narrative spine where something unfolds and that lend itself to the particular technology that you are using.”

The problem? It was “an expensive project with layers of reporters with different talents on it.”

So, “always have a plan B,” said Chris Courtney, mobile product manager of the Tribune Company. Oh, and “fail as fast as possible.”

Academics reported study results about how to navigate this disruption such as redefining the metrics on “engagement,” which often still comprise site bookmarks, return visits, and time spent on site.

“None of these numbers are improving,” said Jonathan Groves, an assistant professor at Drury University. “They are thinking in terms of loyalty; they are not thinking about deep engaged behaviors.”

“We need to get to the stage where people are so engaged with your brand that they are brand ambassadors,” Groves said.

This new skillset begins with journalism schools, whose tasks include:

“By engagement I mean, why don’t we use these incredibly powerful tools to talk with them, listen to them and help us all understand the world a little better?” Carvin said. “We now report in a networked world. We can no longer afford to underplay the public’s role in propagating information.”

Participants exuded optimism about the potential for digital tools to improve journalism and provide a basis for business models while figuring out the privacy, ethics, scalability and fear of failure that come with this emergent world.

“The future of journalism belongs to those people who believe in the future,” Tom Rosenstiel, executive director for the American Press Institute, said.

And from Joshua Benton of Harvard’s NiemanLab: “Let’s all go make unicorns.”

After a dozen years as a reporter, Sue Robinson went back to school to get her PhD from Temple University, graduating in 2007. She is now an associate professor teaching and researching new technologies, social media, information authority and journalism at the University of Wisconsin-Madison’s School of Journalism & Mass Communication. She can be found @suerobinsonUW on Twitter or via email at [email protected].