Do Videogames Cause Stress in Kids? It’s Complicated 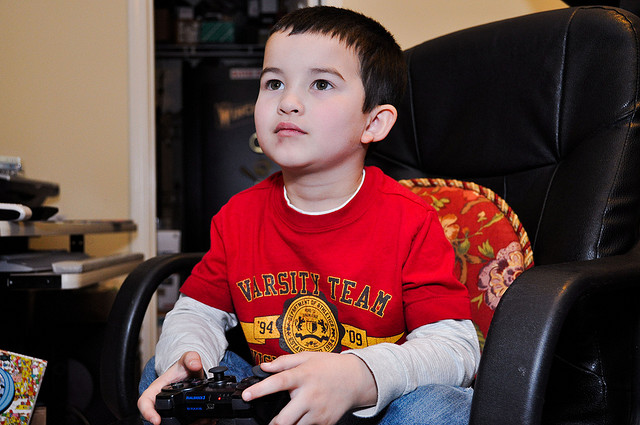 Photo by "Melanie Holtsman via Flickr":http://www.flickr.com/people/holtsman/ and used here with Creative Commons license.

Last September at Stanford’s Medicine X, a conference on the future of medicine and emerging technologies, some of the most fascinating discussions I stumbled upon happened to be impromptu ones taking place in the hallways. One of these involved a prominent health technology entrepreneur and investor expressing concern about some alarming data she had seen on the adverse impact of videogames on children’s stress levels.

People love to talk about how much technology is stressing us all out. Having written about the topic for several years now, I am not generally inclined to jump on the tech-is-stressful bandwagon. I was at Medicine X, in fact, to talk about novel ways in which technology is being used to train athletes and soldiers to better manage stress, anxiety and even post-traumatic stress disorder — and what that might mean for the rest of us.

"Like anything, [videogames are] another activity that can be either positive or negative, depending on how people use it and the state of mind they are in." -Christopher Ferguson

My ears perked up nonetheless, because the angle was novel.

Concerns around videogames and children mostly focus on violent games, whether they may be making kids more aggressive and how that aggression might play out in real life. It comes as no surprise that these worries tend to hit a fever pitch following a national tragedy, such as the one in Newtown, Connecticut.*

But what if, as the entrepreneur was suggesting, the true effects of everyday gaming are more pedestrian — and in some ways, far more pernicious — than that? If some videogame players are, in fact, experiencing persistent, heightened stress levels, what does that mean for children who are playing for one or two hours a day? What about the ones who are playing three or four hours, or even more?

And, given the negative health implications of chronically high stress — heart disease, high cholesterol and blood pressure, diabetes, obesity and depression, among others — what might that mean in terms of a longer-term public health impact?

I tucked the topic away and, in the months that followed, began to poke around the research.

As it turns out, very few subjects I have written about (including whether or not the cry-it-out sleep method is damaging to infants and, trust me, that one almost causes riots) prepared me for the whiplash of contradictory findings that followed.

The conflicting positions fall roughly into two camps, articulated for me by two researchers.

Christopher J. Ferguson, chair of the psychology and communication department at Texas A&M International University told me that as a graduate student examining the connection between media and real-life violence, he was disturbed by the discrepancy between the actual data on the effects of violent media and how scholars were interpreting that data.

“The public comes to the table thinking there is objective information,” he told me, “but in fact researchers are often responding to the greater social milieu and political pressure.” And that, observed Ferguson, “creates a sort of moral panic. That’s when our response to videogames becomes more of a cultural war than real science.”

Yes, said Ferguson, videogames can cause stress, but the good kind. The kind you feel when you’re facing an exciting challenge or playing sports, or reading a book that’s so good you can’t put it down.

And in general, Ferguson’s research shows that videogames appear to reduce people’s overall stress levels. It doesn’t matter if they’re violent or not, though he emphasizes that individual experiences may vary.

“Like anything,” he said, “it’s another activity that can be either positive or negative, depending on how people use it and the state of mind they are in when they come to play.”

Professor Brad Bushman disagrees with Ferguson — so much so that a few times during our conversation I found myself wondering whether in another time and place, he might have even challenged Ferguson to a duel.

According to Bushman, professor of psychology and communication at Ohio State University, the research is clear: When it comes to violent videogames and the stress response, decades of research shows that they can cause significant physiological arousal in players. That is, they can increase angry feelings and behaviors, and aggressive thoughts. They can also have an adverse impact on empathy and pro-social behavior.

Violent videogames are stressful, said Bushman, and the overwhelming majority of social scientists agree on this subject. “But it’s like with global warming research: you can always find a few outliers who are not convinced.”

Bushman offered up a rigorous 2010 meta-analysis, published in Psychological Bulletin, in which he and his colleagues analyzed data from 136 papers, representing more than 130,000 participants and studies from several countries. They found a clear and significant correlation between violent videogames and physiological measures of stress, including heart rate and blood pressure. These effects, Bushman told me, occurred for males and females, children and adults, regardless of where they lived in the world.

I found both Drs. Ferguson and Bushman to be thoughtful researchers, equally passionate about their respective positions, but by the time I finished speaking to them and reviewing the mountain of conflicting studies, I was no clearer than when I first started.

That’s when I took the question to one of my favorite stress experts, Dr. Rajita Sinha, director of the Yale Stress Center and professor of psychiatry, neurobiology and child study at Yale University School of Medicine.

The research is all over the place, agreed Sinha. Her inclination, however, would be to use greater caution when deciding whether children should be playing certain types of videogames.

“The process of focusing on one thing and doing it constantly for long periods of time almost begins to feel like an ongoing stressor, because it’s taking up and draining your resources,” she observed.

Our frontal lobes — the parts of the brain important for attention, decision-making and shifting our attention from one thing to another — can get depleted quickly after a period of time, particularly if you are engaged in a highly demanding activity that’s taking up your attention and vigilance. “That’s when the reward pathways run amok and then there is nothing to control them or keep them in check,” she said.

It’s known as a “locked-in syndrome,” Sinha said. Your brain gets hijacked by doing something over and over again, and it can begin to have the same effect as an addiction.
This is of greater concern for young people because in children and adolescents, the systems of the brain involved in making good choices and helping to shift the mind are still developing.

“They’re not at full capacity to begin with and so they’re likely to have more difficulty than adults,” Sinha said.

A question of balance

“People like a clean headline,” Andrea Kuszewski tells me. “But playing videogames is not going to turn your kid into a zombie.”

Kuszewski is a creativity researcher and robopsychologist. When she worked as a therapist, she had great success using videogames to help motivate children who were particularly difficult to inspire. “You can take any subject or skill, and find a way to design a game around it to benefit yourself and others,” she observes. “A well-designed game can serve as a natural motivator, a positive feedback loop that continues taking you to the next level.”

At the end of the day videogames are like any other technology. They can serve up a see-saw of alternate highs and lows, depending on how we use them and how we relate to them.

On the upside, gaming is being used to teach and challenge. It is seen as an emerging tool for social change, and for expanding and enhancing human capacity and development in once-unimaginable ways.

On the other hand, there is growing evidence that certain videogames and incessant gaming may be setting off our stress systems and keeping us in a persistent and physiologically damaging state of fight-or-flight, thereby adding yet another layer of anxiety to lives already overwhelmed by stress.

But is the real issue here gaming? Or are we once again wading into the murky waters of ethics and propriety, and balance and moderation, in a society where technology has become ever-present? And where studies show that more and more of us are displaying symptoms of attention deficit hyperactivity disorder, obsessive-compulsive disorder and addictive dependencies.

We have few answers and many more questions, but most scientists agree that the impact of certain types of videogames and long hours of gaming on children’s biology and stress response requires further study.

In the meantime, your best bet may be less hysterics and more balance — whatever that means.

Amanda Enayati is the technology and stress correspondent for PBS MediaShift as well as CNN Health’s stress columnist.

2 responses to “Do Videogames Cause Stress in Kids? It’s Complicated”