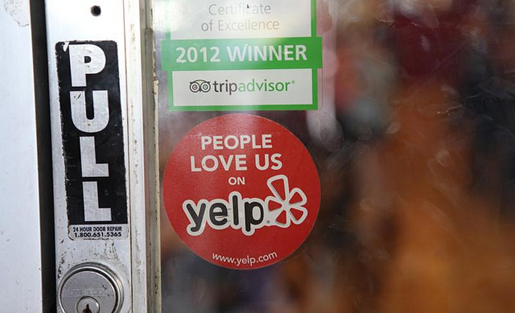 Jordan Shafran’s family owned construction business, Shafran Construction, has been in the business of home improvement for 25 years. It has an A+ rating with the Better Business Bureau, hundreds of happy customers — and a one-star review on Yelp.

“Shafran Construction Company did the worst possible job I’ve ever seen,” reads the sole review, written by a Yelper named John D. who is faceless, friendless, and inactive since 2010. However, thanks to this anonymous review, Shafran’s single star rating shows up as the second Google result for his name, haunting his business even now. Shafran’s attempts to contact “John Doe,” as he calls him, have not been returned.

This could turn out to be a classic [Intellectual Property] lawsuit, because it's a modern case where modern technology is wrestling with old-fashioned notions of reputation and business practices." -Roy Gutterman

“It’s very odd that out of 19 reviews posted, Yelp’s filter has decided that the single negative review is the only one that isn’t spam,” Shafran said. “For the little guy, what Yelp is doing is definitely frustrating. Everything is Web-based these days and they control you like a puppet.”

Shafran hypothesizes that he’s been blacklisted for refusing to advertise with Yelp, a deal that starts at $300 a month. He told MediaShift that his positive reviews were filtered shortly after he asked to stop receiving calls from Yelp salespeople.

“It’s more like a mafia if you think about it,” he said. “Unless you pay them, the company will only show negative reviews.”

“The bully in the schoolyard”

Accusations of extortion might seem like a stretch, but not if you’ve been following Yelp’s shaky history with small business. They’ve been the subject of two class action suits — though both were dismissed before they got to trial. A third is in the works. A 2009 East Bay Express article titled Yelp and the Business of Extortion 2.0, though roundly dismissed by Yelp, continues to host recent comments from upset business owners, some posted as recently as January 2013, all with stories similar to Shafran’s.

What it all comes down to is small business owners’ beliefs that the Yelp filter, designed to spot spam, is not doing its job correctly.

The founder of anti-Yelp site Yelp Sucks, business consultant Adryenn Ashley, asserts that there is something seriously detrimental about Yelp’s filtration algorithm, which was designed to remove spam and maintain Yelp’s slogan: “Real people, real reviews.”

“The filter is broken,” she said. “I’ve heard of people who buy a business’s Yelp deal, check in on Yelp when they get there, write a review, and still get filtered as spam. It makes users upset, like their words aren’t getting validated.”

Ashley says the filter is inconsistent.

“When Yelp says they have an algorithm, that means one thing, but what it seems like what they actually have is rules. They get different results every time,” she said.

Ashley’s site, Yelp Sucks, is a 600-person strong community where many business owners gather to share their Yelp concerns. When this reporter left a comment encouraging members to share their stories, she received more than 70 emails.

Most of these stories share a common thread. Members believe that advertising with Yelp is the only way to reveal positive reviews and filter negative ones. They have a single visible one-star review and dozens of filtered five-star reviews. When they contact Yelp about the filtered reviews, they say they are told the reviews aren’t genuine. This is no small handful of complainers either; a recent FOIA request to the Federal Trade Commission revealed more than 700 complaints against Yelp over the last four years.

“People call me and they’re crying on the phone because they haven’t got anyone to listen,” she said. “When you talk to these people, you hear the pain in their voices like they’re being squeezed, like they have no choice.

“Yelp is the bully on the schoolyard and this community is the only place where they can have their voices heard.”

An emphasis on education

Yelp is acutely aware of what many small business owners are thinking. But according to spokeswoman Kristen Whisenand, the filter is here to stay.

“I understand the filter is a point of frustration, but if it weren’t in place we’d be overrun by shills and malicious content,” she said, pointing out that Google and Amazon have also added filters.

Whisenand said business owners aren’t wrong when they suspect more positive reviews are filtered than negative ones. However, that’s because of Yelp’s review ratio, not any malicious intent on the site’s part.

NOTE: Please see update below on changes to this quote.

Either way, said Whisenand, the idea that advertising with Yelp can alter the filter is a myth.

“There is no amount of money you can pay Yelp to manipulate your reviews, and we do not punish people who don’t advertise,” she said.

Wisenand said the filtering system isn’t perfect, but “does a pretty good job given its task.” She points out that reviews are not permanently banished to the filtered tag — what is marked as filtered today may be revised as legitimate feedback later on. Since Yelp is always in the process of improving the filter, the company has instead tried to resolve its image problem with small businesses in a more immediate way.

Jose Luis Rojano of Lucha Libre Gourmet Taco Shop is part of Yelp’s solution. He’s a member of Yelp’s Small Business Advisory Council, a dozen or so business owners from all fields who advise Yelp on its relations with small businesses.

“A lot of my business owner friends hate Yelp,” Rojano said. “The way I see it, people will be talking about your business regardless, whether on Yelp or blogs. At least Yelp gives you the opportunity to get involved in those conversations.”

Rojano meets with the Yelp Advisory Council for a monthly group phone meeting. The chief topic of discussion is how the group can help educate business owners on using the site in a positive way.

Aside from these talks, Rojano gets no special treatment. He doesn’t advertise with Yelp or pay any fee to be on the council. He has more than 250 filtered reviews, many from active Yelp accounts with photos, and nothing he says to Yelp will change that. But he said the council has changed his attitude about how to work with Yelp.

“Yelp does give consumers a lot of power to make or break a business, and a lot of business owners are afraid of it because it does. It takes your business and puts it out in the open,” he said.

“You can either hide from that or use it as a tool to promote your business.”

No solution in sight

Rojano is one of the lucky ones. With his four-star average on Yelp, his words may not be much consolation to a business owner who has had all of her five-star reviews filtered. And unfortunately, the latter case is the one that’s easier to find online.

“I get calls every day to advertise and when I suggest that I might if they tell me about the algorithm that hides my reviews, they suggest that ‘advertising might open it up so that more people will review it and then the algorithm will change to include the hidden reviews,’” wrote Amy Lewis of Whole Health Associates.

This is one of many statements emailed to the reporter, but a quick Google search for “Yelp scam” nets hundreds more. Yelp’s official response is that business owners don’t understand the complex algorithm, but this explanation doesn’t sit right with Shafran.

“I’m a very computer-savvy person. I’ve spoken with Yelp numerous times, and they always say I don’t understand how the site or the filtration system works. I don’t buy it.”

With Yelp saying one thing and hundreds of business owners saying the opposite, the only way to resolve the situation would be to have a legal investigation. One White House petition even urges the Attorney General to investigate.

According to Roy Gutterman, associate professor of communications law and journalism at Syracuse University and director of the Tully Center for Free Speech, it’d be hard to say if Yelp is doing anything wrong.

“This could turn out to be a classic [Intellectual Property] lawsuit, because it’s a modern case where modern technology is wrestling with old-fashioned notions of reputation and business practices,” he said.

“I can envision a government agency intervening to a certain extent, but if business owners are going for an extortion charge, there’s going to be a lot to prove.”

I would never say that the filtered reviews aren’t real — in fact, I specifically [said] that we admit the system isn’t perfect and sometimes perfectly legitimate reviews get filtered and fake reviews remain listed.

In an earlier email she said:

I want to clarify that reviews that get filtered aren’t necessarily “spam.”…We admit that our filtering system isn’t perfect — it sometimes filters out perfectly legitimate reviews and sometimes suspicious reviews remain on a business listing — but we think it does a pretty good job given its task. The filtering process also isn’t instantaneous; reviews can move into and out of the filter at any time. It’s important to note that Yelp is a community review site, not a drive-by one.

Photo of “People on Yelp Hate Us” by Steven & Courtney Johnson & Horwitz on Flickr and used here with Creative Commons license.