Is It Authentic? When Citizens and Soldiers Document War 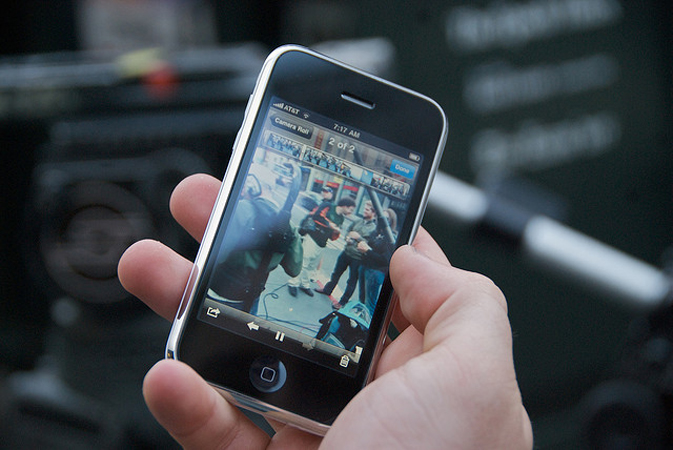 The international human rights community is working to improve ways to authenticate, curate, and disseminate videos captured by citizens and soldiers in conflict zones. Photo by "Steve Rhodes on Flickr":http://www.flickr.com/photos/ari/3642215560/ and used with Creative Commons license.

In November, one video caught the attention of international observers, news outlets, and criminal prosecutors. It’s the type of video whose images have altered the discussion on the Syrian conflict, and may also revolutionize the role of citizen video in times of war.

The scene takes place in an open-walled building off a main road in Idlib province. The videographer is clearly an amateur, as the camera never remains still. The horror is audible before it is visual: There is a desperate cacophony of men’s voices before the camera approaches the source. Young men lay twisted and helpless on the ground, surrounded by others carrying automatic rifles. The armed men step over their prisoners of war, stomping on their faces and limbs. And then, as the camera pans aimlessly across rubble on the ground, the shouting is replaced by automatic gunfire and pleas for mercy. When the videographer finds focus again, bullets are ricocheting off surfaces, and a cloud of dust rises from the pile of bodies.

Citizen video is increasingly the best and only evidence of serious crimes, yet there does not exist a protocol for authenticating it."

The video spread quickly, thanks to a Syrian human rights organization that associated the footage with a reported killing of 28 government soldiers by rebel battalions in the area.

“It looks very likely that this is a war crime,” Rupert Colville, a spokesman for the United Nations High Commissioner for Human Rights told journalists. Amnesty International and others weighed in, reaffirming it as possible evidence that war crimes are being committed not only by the government of Bashar al-Assad but by the rebel forces that are seeking international assistance to put up a fight against Assad’s army.

The video circulated online just before an international meeting in Doha, Qatar, whose main goal was to find common ground among the Syrian opposition factions. International donors seemed more cautious about throwing their support behind the rebels as a direct result of what the video appears to depict.

But with such consequential footage emerging out of a shaky YouTube video, all such reactions came with a big caveat: “assuming it is authentic.” Citizen video is increasingly the best and only evidence of serious crimes, yet there does not exist a protocol for authenticating it.

That is why we at WITNESS are thankful for our partnership with journalistic powerhouse Storyful. While WITNESS curates and contextualizes citizen videos on the Human Rights Channel, Storyful investigates the authenticity of each video prior to posting.

In this case, the Storyful staff relied on new media techniques to determine that it was not a fraud. A video from the livestream service Bambuser seems to show the same event in the same place from a distance. A satellite image of the alleged location depicts the buildings that appear in the video. In all, what occurs in the video in question matches what Storyful found to be shown in 10 other videos from several accounts uploaded shortly thereafter.

While it is nearly impossible to determine with absolute confidence the authenticity of any video uploaded anonymously from a conflict zone, this investigation was enough for the Human Rights Channel and mainstream news outlets to re-post the video or describe the gravity of the crimes it appears to show. Whether such verification would be enough for admissibility in a criminal trial is another question, and it is why WITNESS is working with allies in the international justice community to advance the use of digital media as evidence in legal hearings.

BEYOND AUTHENTICATION: THE IMPORTANCE OF CURATION, ARCHIVING, AND TRAINING

Authenticity aside, the possible existence of criminal evidence captured on citizen video raises other questions that the international human rights, criminal justice, and technology communities must confront.

The creation of the Human Rights Channel is a preliminary step to address some of these questions. Curation by human rights experts is one part of the equation, but due to the sheer quantity of citizen videos uploaded from places as disparate as Syria, Gaza, and Bolivia, it is not enough.

Activists and amplifiers alike would benefit from a more systematic way for content to be flagged as human rights related. We look forward to more conversations with our partners in the tech industry, including YouTube, about how their tools can improve the efficacy and responsible use of human rights video.

This video is one in a growing number of complex examples of how video can expose human rights abuses. It is up to human rights organizations, journalists, activists, concerned citizens and judicial bodies to make sure that the people behind the cameras are not recording in vain. The future of citizen video, like the cell phones recording Syria’s war, is in our hands.

Madeleine Bair is the Human Rights Channel editor at WITNESS. She earned a dual MA in Journalism and International Studies from UC Berkeley, a BA from the University of Chicago, and was a UC Berkeley Human Rights Center Fellow in 2010. She has taught radio production to young adults, produced a documentary about the latino dropout crisis for PBS, and worked as an I.F.Stone Fellow at Human Rights Watch.