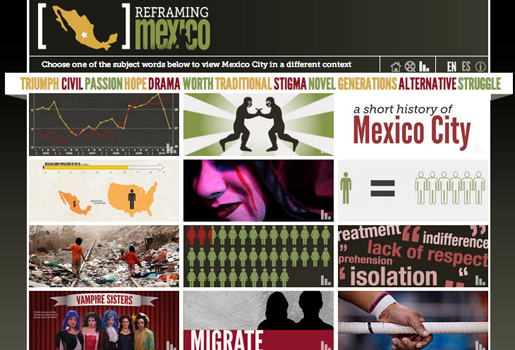 With readers juggling their tablets, mobile phones, laptops and more as they consume the news, journalists have an opportunity to create a new kind of story.

Transmedia storytelling means dividing chunks of a story across multiple platforms to form one cohesive narrative. Transmedia stories often have audience engagement as a key goal.

Interface is king; nothing kills an ambitious multiplatform effort faster than a clunky point of entry." -Jessica Clark

Creating an online component to a documentary film, hosting a live event to complement a recent profile on a needy cause, or pairing an interactive website with your book release are all ways to build audience engagement across platforms.

The term “transmedia” has met its share of controversy, as it’s often used to describe the techniques marketing and entertainment industries use to promote new films and TV series (and rake in money).

But whatever you call this form of storytelling, it lets you take advantage of multiple media in unique ways. If you give it a try, keep these tips in mind:

Rather than repeating the information on different platforms, use different parts of a story to match a platform’s strength and maximize user experience. A project called “Culture of Coffee,” for instance, matches unique story bits with different forms of media. Project creator Metasebia Yoseph traces the roots and traditions of coffee on a Tumblr blog, a website, a coffee table book (in the works), live events, social media and crowdfunding.

2. Provide a seamless point of entry

Because audience engagement is central to this form of storytelling, make sure whichever platform you’re using gets readers to interact in a very simple way. “Interface is king; nothing kills an ambitious multiplatform effort faster than a clunky point of entry,” Jessica Clark, AIR media strategist, wrote in a yearly roundup of exemplary transmedia projects.

Interactive documentary Reframing Mexico embraces a simple interface to keep the audience engaged. The online documentary features personal narratives with infographics that offer background info on the social, economic and historical stats of the country.

It’s not feasible to expect one journalist to do it all. Partnerships are important. Several organizations collaborated on the transmedia project Stillspotting NYC, which uses video, interactive maps, audio and in-depth data studies to create one story about the noise levels in New York City.

This trailer to the Aatsinki documentary is accompanied by an interactive online component.

“Aatsinki: The Story of Arctic Cowboys“ is a full-length documentary about a year in the life of reindeer herders. It has an interactive online component, The Aatsinki Season, that points to the social, political, environmental and moral issues behind the practice. The idea came from a weekend Hackathon of developers and filmmakers.

Storyteller Felicia Pride, founder of Pride Collaborative, talked affordability during a live webinar on storytelling techniques. She said big-name transmedia projects like Half the Sky — a combination of book, documentary, mobile games and a gender rights campaign — can be very costly, but there are ways to include other media without breaking the bank.

“You can incorporate transmedia in a low-cost way, like introducing social media as a way to extend the story,” Pride said. “It depends on your goals and what you’re trying to achieve.”

“There are so many tools for creativity it can be overwhelming sometimes,” Patrick White, creative director at Arcade Sunshine Media, said at a Pride Collaborative event on storytelling innovation.

Getting caught up in the bells and whistles and ignoring storytelling basics could harm your project. “The story comes first, always,” White said. Arcade Sunshine produces transmedia projects like Lakou Mizik, an online hub about Haitian music featuring audio, video and a social action campaign.

“By telling interconnected stories we can embrace the nuance and complexity that exists in any story world,” Moloney wrote. “Through multiple forms we can engage the different parts of our story-loving brains. By distributing them across varying channels we can target the audiences that really matter.”

Margaret Looney writes stories and blog posts on the latest media trends, reporting tools and journalism resources for IJNet.org. Looney previously interned at the U.S. Embassy in Paris, with the Knight International Journalism Fellowships Program and IJNet. She lived abroad in Morocco and France and speaks intermediate French.

4 responses to “5 Tips for Transmedia Storytelling”