The Easiest Way to Record Phone Interviews? Have the Subject Use an iPhone to Record Themselves 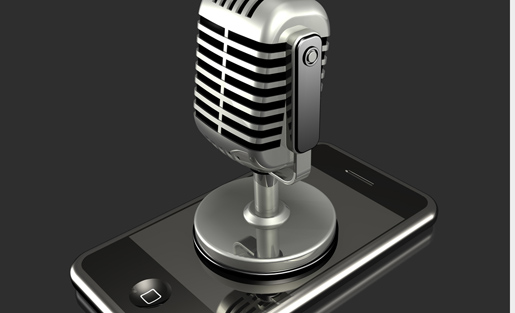 Reporters aren't just using iPhones to record in-person interviews. Now, they are asking phone interview subjects to record themselves with iPhones too.

A reporter’s first question in an interview can be crucial.

These days my first question is, “Do you have access to an iPhone, iPad or iPod Touch?”

At first it was intimidating, but once you do it once, you realize how much better it is than waiting for a reporter to find you." -Maryland Attorney General Douglas Gansler

A major benefit of reporting with an iPhone is the ability to avoid inferior phone-quality interviews. A few swipes can turn an iPhone into a powerful recording tool, providing a reporter with studio-quality audio quickly, without requiring coordination of a busy reporter and interviewee’s schedules.

The author doing an interview.

Not only do I use an iPhone as my exclusive recording device for radio reports on WTOP all news radio in Washington, D.C., but I also ask all my interview subjects to record themselves with an iPhone when I do phone interviews.

This technique isn’t just for Apple devices. Most smartphones have the capability to record audio memos and share through email. However, non-Apple devices are often limited by inferior built-in microphones or sound processing capabilities.

Getting the Interviewee to Record Themselves

Part of the phone interview process now includes describing how the iPhone can help the newsmaker get his or her point across in superior sounding audio — and then cajoling, reassuring and instructing the skeptical newsmaker or public relations pro how it’s done.

Here’s how it works: The iPhone, iPad, or iPod Touch (or Android smartphone) essentially replaces a tape recorder.

I tell people to call my cell phone from a landline or other cell phone, with their Apple device handy.

While newsmakers hear and answer my questions on the phone, they simultaneously record their answers on the iOS device.

When the interview is done, they email or otherwise share the raw interview, which I edit for air and online posting.

I instruct them to hold the device about a foot from their mouth.

On an iPhone, the microphone is located directly to the left of the charging port on the bottom of the phone.

On an iPad and iPad Mini, the microphone is a small hole along the top edge of the device.

On the iPod Touch, the built-in microphone is located on the back of the device, near the top, between the iSight camera and LED flash.

The app’s the key

With iPhone and iPod Touch, the simplest way to do this is with the built-in VoiceMemo app, which is often hidden in a Utilities folder.

iPad and iPad Mini aren’t equipped with VoiceMemo, but there are some cheap and quick workarounds.

For a short interview, Voice Recorder HD is intuitive and easy to explain. If I really want people to participate I’ll gift them the app, so it shows up in their inbox, ready to download.

If an interviewee already has a SoundCloud account, or has a few minutes to set one up on a desktop, he or she can download the free iPhone or iPad SoundCloud app. With two or three swipes, the person can record and share the audio file with me. (The SoundCloud app also works with Android phones if that’s what the interviewee has instead.)

How PR Pros Can Help

Marc Silverstein, of On The Marc Media told me, “with a reporter’s packed schedule, time constraints, and the need to report over multiple platforms, it can be the deciding factor over whether my client gets interviewed, or someone else’s.”

“All I’m doing is pushing record on the VoiceMemo app and making sure the client holds the phone properly. I check the acoustics of the room, and try to keep them away from a window where there’s a leaf blower outside,” he said.

Tammy Gordon, AARP’s director of Social Communications, said the iPhone is “the single most important technology tool in our arsenal.”

“There’s an initial fear of new technology that goes away once they learn a few basic skills like downloading apps, shooting photos or video, and managing social media accounts via the iPhone,” Gordon told me.

Media-savvy newsmakers appreciate the benefits of having their words broadcast clearly.

Maryland Attorney General Douglas Gansler says that “it’s easy to do, convenient to use, and the audio is crystal clear.”

“At first it was intimidating, but once you do it once, you realize how much better it is than waiting for a reporter to find you,” Gansler said.

If the public relations pro balks at the “inconvenience,” I remind them that this will help their client communicate as clearly as possible. If it’s still too much of a bother, I pass on the interview.

With the prevalence of Skype, some newsmakers and public relations experts are familiar with voice-over-IP service, and may have a microphone set-up connected to a desktop computer.

The free Skype iPhone and iPad app is easy to use, but requires the reporter to record the conversation on a desktop using audio-editing software.

National Public Radio provides interviewees with a link for the Report-IT Live app which allows the audio to be easily uploaded to an FTP site.

While the process provides excellent quality, it requires an expensive codec on the receiving end. Click the image on the left to see what NPR asks of its phone interview subjects.

The benefits of studio-quality audio notwithstanding, it’s still important for reporters to do in-person interviews.

Silverstein says when clients voice surprise at how easy the process is, it’s “expressed with equal parts awe and disappointment.”

“Yes, there’s a certain ‘Apple Culture’ coolness to it, but it’s still a big deal when a big-time reporter shows up at the client’s office,” Silverstein said.

Correction: This story has been corrected to reflect that the iPod Touch does have the VoiceMemo app.

Note: This story was adapted from a shorter post on Neal Augenstein’s iPhone Reporting Tumblog.

Neal Augenstein is an award-winning reporter with WTOP-FM and wtop.com in Washington, D.C. He is the first major-market radio reporter to do all his field reporting on an iPhone. In Nov. 2012, Neal and WTOP donated his iPhone to The Newseum” for future displays related to changes in news technology. Neal is a frequent contributor to CBS News Radio. On Twitter, follow @AugensteinWTOP. He blogs at www.iphonereporting.tumblr.com.

6 responses to “The Easiest Way to Record Phone Interviews? Have the Subject Use an iPhone to Record Themselves”