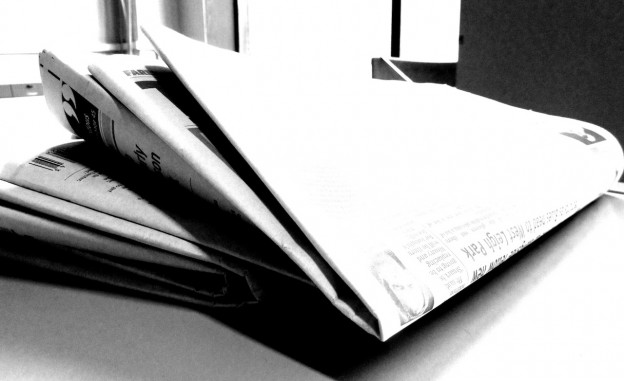 The Drone Journalism Lab at the University of Nebraska covered the recent drought by teaming with the computer science department to fly a drone to capture footage. Image courtesy of NS Newsflash of Flickr.

Welcome to the 65th episode of the Mediatwits podcast, with Mark Glaser and Rafat Ali as co-hosts. The big news is News Corp. shutting the tablet-only publication The Daily, which was losing millions and not gaining enough traction. What did they learn from that experiment? Our show is largely about science, with a look at unmanned airspace vehicles (UAVs) or drones coming to journalism. What does the future portend for drones and will they invade privacy as well as domestic airspace? We spoke to Matt Waite from the Drone Journalism Lab as well as Katy Culver from the University of Wisconsin.

And then there’s the wildly popular NASA.gov website, with photos, videos and interactive features for space buffs. The site is planning its first revamp since 2007, and is including the public in those plans by letting them come up with ideas and vote them up online. We spoke to NASA.gov manager Brian Dunbar, who’s been running the site since 1995, for his insight.

Civil libertarians are very concerned about conflicts of interest [with journalists' use of drones], about media acting as surrogates for the police." -Kathleen Culver
ADVERTISEMENT

Matt Waite is a professor of practice at the College of Journalism and Mass Communications at the University of Nebraska-Lincoln and the founder of the Drone Journalism Lab. Formerly, he was the senior news technologist at the Tampa Bay Times where he developed the Pulitzer Prize-winning PolitiFact site.

Kathleen Culver is an assistant professor in the University of Wisconsin-Madison School of Journalism & Mass Communication and associate director of the Center for Journalism Ethics. Culver focuses on the ethical dimensions of social tools, technological advances and networked information. She also serves as visiting faculty for the Poynter Institute.

Brian Dunbar has managed the NASA.gov website since 1995. The site is one of the most popular across the government and is periodically named one of the best on the web, most recently this year by Time Magazine.

Highlights from the Show

1:00: The death of The Daily, the tablet-only publication from News Corp.

9:40: Waite: I wanted mapping drone but it cost too much and was illegal in U.S.

12:00: Drone Journalism Lab captured images of the Nebraska drought with a drone

14:30: Culver on ethical dimension of drone use by journalists

19:45: Waite: Journalists need to think about safety when taking drones into combat zones

26:30: Dunbar: We focus on the general public, people without sophisticated science or tech background

30:20: Dunbar: We have very different social media and web audiences

32:10: How NASA.gov has become its own media outlet and can bypass the media

Ethics Aloft: The Pros and Cons of Journalists Using Drones at PBS MediaShift

NASA’s Ideascale forum for the redesign

Crowdsourcing the next NASA.gov at FCW

Be sure to vote in our weekly poll, this time about journalists using drones: