Giving the Gift of E-Reading: New Developments in E-Book Giving and E-Reader Cozies 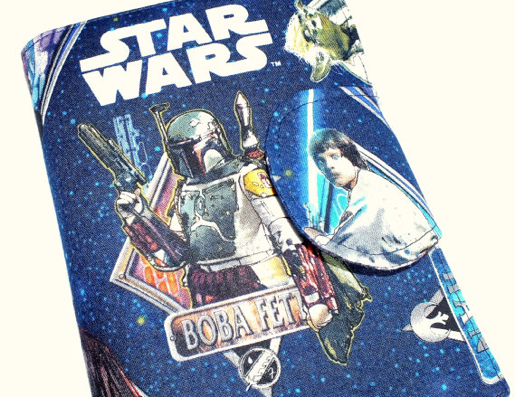 This "Star Wars cover":http://www.etsy.com/listing/111253351/kindle-cover-star-wars-ereader-cover?ref=sr_gallery_2&ga_search_query=star+wars+e-reader+cover&ga_view_type=gallery&ga_ship_to=US&ga_search_type=all for Kindle on Etsy is made of material featuring Luke, Han, Boba Fett and Yoda, their light sabers aglow, the fine hairs on Yoda's head backlit by the stars ($36).

If you thought e-books, e-readers and tablets dominated the last holiday season, you haven’t seen anything yet.

For one, this year it’s easier than ever to give e-books as gifts, and, thanks to a recent partnership with Kobo, it’s now even possible to support your local independent bookseller while giving them. And, according to the catalogs piling up in my house and the shopping ads filling my inbox, everyone who wants an e-reader either has one or will receive one for Christmas.

Everyone who wants an e-reader either has one or will receive one for Christmas. But the question remains: How will we accessorize?"
ADVERTISEMENT
Click to read the whole series.

But the question remains: How will we accessorize?

Clothing and Gadgetry For E-Readers

Judging from the sheer page count devoted to certain devices in its catalog, Brookstone badly wants to sell you a gadget that will enhance your communion with your iPhone, tablet or e-reader. They offer many speakers, headphones and stands for your tablets and e-readers, as well as a device that adds a keyboard and an attractive carrying case for your iPad (Bluetooth Keyboard with Tech-Grip Case for iPad Tablets, $99.99). But why stop there? For $149.99, you can get the Bluetooth Keyboard Pro in “rich leather.” (Don’t tell anybody at Brookstone I told you this, but Kohl’s has an Innovative Technology iPad case with Bluetooth Keyboard on sale for $49.99.)

My favorite e-reader/tablet enhancing item in the Brookstone catalog is the iPad Tablet Boombox, on sale for $99.99, the evolutionary story of which goes something like this:

1970s-‘80s: People think, “Hey, it would be neat to play my music outside to delight my friends and annoy my elders.” Early boomboxes are developed. Ever-larger boomboxes cause neck cramps when their owners transport them from one block party to another.

1980s-‘90s: The nation, desperate for neck relief and feeling, frankly, a little bit anti-social after all those street corner breakdancing sessions, turns to compact Walkmans and Discmans as the portable music devices of choice.

2000s: Personal music players grow ever smaller as Apple threatens to out-tiny its own iPod Nano by releasing the iPod Zepto.

2012: People think, “Hey, it would be neat to play my music outside to delight my friends and annoy my elders.” The iPad Tablet Boombox is born. Just plug in your iPad and rock the block, or project your preferred audio books to the masses.

For the gadget-laden girl in need of accessories, Target offers every Hello Kitty item imaginable, including Hello Kitty Earbuds ($7.99), a Hello Kitty Optical Mouse ($12.99), the Hello Kitty iPad Messenger Bag ($49.99), and a Hello Kitty iPhone 4 Screen Protector ($14.99). Or perhaps she’s crafty, and would like an American Girl Crafts Tech Case Sewing Kit, with everything she needs to sew a brightly colored felt owl cover for her iPod ($14 on Amazon). Or, for free, go on YouTube and watch Buddies4Life1530’s adorable instructional video about how to make an iPad for your American Girl Doll. (“I forgot what this is called. I think it’s corkboard, whatever it is.”)

If you don’t want to buy anything that would encourage your kids to hog your iPad, there’s the battery-operated Discovery Kids Teach & Talk Tablet, on sale for $14.99 at Tuesday Morning, which promises, “Now the kids don’t have to use yours!” It’s bilingual, so you can tell yourself it’s educational. For those who are already nostalgic about paper magazines, you can remember those bygone days of ink-smudged fingers through Condé Nast Novelty Bath Sheets, beach towels printed with covers of The New Yorker from 1926 and 1962, you know, ancient times, on sale for $19.99 at Tuesday Morning.

When I checked Etsy, there were more than 20,000 different handmade covers for Nooks, Kindles, iPads, and other e-readers for sale. Tasteful designs dominate, including lots of flowers, owls, and Eiffel Towers. However, trained by Regretsy, I’m drawn toward the potential train wrecks. There’s a garish — or perhaps merely festive — red USC Trojan-themed cover for the Kindle 3 ($25). There’s a Star Wars cover made of material featuring Luke, Han, Boba Fett and Yoda, their light sabers aglow, the fine hairs on Yoda’s head backlit by the stars ($36).

Or try the e-reader cover fashioned out of the actual cover of the 1938 Hardy Boys mystery “The Secret Warning” ($25.99) touted as “the perfect replacement for the feel of reading a real book in your hands!”

Someone with the nomme de craft Chick-Lit Designs sells made-to-order purses created from leather book covers, including four novels by Hemingway, Louisa May Alcott’s “Little Women,” and H.G. Wells’ “Seven Novels.” The purses accommodate an e-reader and include a “compact pocket mirror,” useful for fixing your makeup after you’ve cried your eyes out over the ending of “For Whom The Bell Tolls” ($175).

Perhaps the most appropriate e-reader cover is one by Geekifyinc with an enormous question mark on the front ($42.95), reminding passersby that they have no idea what you’re reading and that you could be reading anything, even though odds are you’re reading “Fifty Shades of Gray.”

Has the e-book craze progressed so far that regular books are now considered a retro-chic home accessory? Anthropologie thinks so, offering what they call “Printed Penguin classics” with bright graphic covers for $17.99. Clarifying that these books are “printed” will surely avert returns from angry customers who can’t figure out how to turn them on.

Remember last year when various device-specific restrictions on giving e-books added a dash of old-fashioned cranky Puritanism to this festive season? This year, for the most part, gifting e-books is a lot easier.

At Amazon and Barnes & Noble, you can give specific Kindle e-books or Nook books or gift cards for recipients to choose their own books. You can pick the date of delivery so it arrives when Santa does. And if the recipient doesn’t like the e-book, he or she can return it for credit — handy for those of us debating about whether to give Nate Silver’s “The Signal and the Noise” to a statistics-and-baseball-loving yet red-state-minded relative. As for Apple, you still can’t give your friends and relatives specific iBooks, just iTunes gift cards, which you know your niece is going to blow on Justin Bieber singles instead of downloading “Middlemarch” like you wanted her to.

One big change from last year is the state of purchasing e-books from independent booksellers, many of which used to sell Google eBooks online and in their stores through Google’s reseller program. In April, Google nixed this deal, citing low sales and a plan to start selling e-books exclusively through its own Google Play. This left independent booksellers scrambling for a new e-book partner, and they found one in Kobo in August.

Dozens of independent bookstores, including Greenlight Bookstore in Brooklyn, Prairie Lights Books in Iowa City, Powell’s Books in Portland, and Tattered Cover Book Store in Denver have begun selling Kobo e-readers and e-books. IndieBound maintains a list of the independent booksellers participating in the program. The Tattered Cover sells the Kobo Mini for $79.99 and the Kobo Glo for $129.99, and according to the bookstore’s website, “all purchases made on devices registered with us will benefit Tattered Cover.”

You can also support your favorite indie by signing up for a Kobo account specific to the bookstore, and each e-book purchased through it will benefit the store. This is good news for readers who enjoy e-books but still want a friendly neighborhood place to browse printed books, drink coffee, meet friends, attend author talks, knit cozies for your e-readers, and show off your new Star Wars iPad cover — behind which you’re totally reading “Middlemarch.”