Can an Old-Fashioned Non-Interactive Author Survive in the Social Age? 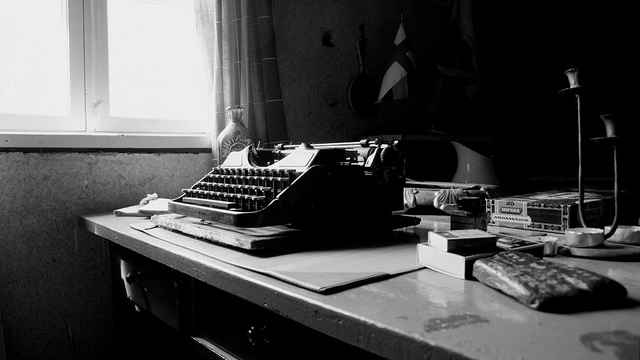 Photo by "PastSide on Flickr":http://www.flickr.com/photos/pastside/7846155968/sizes/z/in/photostream/ and used here with Creative Commons license.

During my grad school days nearly a decade ago, I relished the stories of editor extraordinaire Maxwell Perkins nurturing a promising, yet unknown F. Scott Fitzgerald. Granted, by the time I was studying book publishing, tales of editors and authors toiling together for years to perfect a manuscript were no longer occurring in a business at the mercy of output, distribution, and rising production costs. Those days had been long gone.

Yet, still, I knew writers at the time who wrote books for a living. That’s it. Career authors who weren’t cut from the same cloth as brand James Patterson or renowned writer Maya Angelou or self-publishing marketing phenom Amanda Hocking. They were what the industry considers mid-list writers — talented, consistent, thoughtful, between brands and one-hit wonders, but a necessary piece of America’s literary tradition all the same. A great novel still had the power to trump the number of Twitter followers an author had. Well, Twitter had not yet existed.

To be successful these days being a good writer is not enough. You must become a brand, a salesman, marketer, publicist, travel agent and a friend to all!" -Donna Grant and Virginia DeBerry
ADVERTISEMENT
Click to read the whole series.

These days, however, I know literary mid-list writers who are self-publishing because, while their work has been celebrated, book sales haven’t kept up and their longtime publishers no longer have a place for them on their front lists. Some are excited to take control of their work into their own hands but are simultaneously overwhelmed by the prospect. A number of them, however, are resentful, tired and defeated. They aren’t, understandably so, marketing gurus or on the pulse of the e-book evolution. They are, simply, writers.

The future of books is certainly not a new conversation. But what’s often left out of the discussion is what is to become of the author — the consummate writer who made her living by writing books. The young man who dreams of being a novelist in the footsteps of Ernest Hemingway. What will become of him?

The effort vs. compensation split

Donna Grant and Virginia DeBerry recently put their writing careers on hold because of the pressures of the new publishing world.

When we talk about the future for books, what role will the author play? And will that role be significant enough to support her craft? Or will craft become a smaller and smaller aspect of a career that will become increasingly driven by technological forces? Is it possible that authors will assume a lofty position of storyteller where story trumps format?

If bestselling writing team Donna Grant and Virginia DeBerry is any example, that role will continue to diminish. The duo has written several novels together, spanning two decades. They officially put their writing careers on hold through an announcement on their blog.

We are stepping back, down, out — for now. We’ve been in the publishing business for more than 20 years and we’ve had a great ride, but the business has changed…in ways not necessarily to our liking. And we have changed. For more than half of those 20 years, we were lucky enough to write full time and support ourselves (TWO OF US) from our novels!! This is something we know not many authors get to say — and we are hugely grateful to all of you who have supported our work — and those who will continue to buy and read our books, because they aren’t going anywhere.

But we now find that is no longer the case, nor is it likely to be that way again. Back when we started this journey we were 20 years younger and working full time and writing full time seemed doable — because it was. It isn’t any more. Period. As any of you who’ve ever written or attempted to write a novel know, it is so much more than a notion. It is an all consuming undertaking.

We are not the kinds of writers who can pump out a book every six months — we think and plot and outline and think and plan and think and write. Every single solitary word we put down is important. We have spent tens of thousands of hours working on our novels — probably somewhere around 5,000 hours a book. We have missed holidays and family vacations because of deadlines. Despite all that, it used to be fantastic. It used to be fun. We were doing what we loved. We got to travel far and wide. We got to hang out together all the time. And we got paid!! How cool was that?! But these days the publishing industry requires authors to do WAY more work, for WAY less money. Write a book (or more) a year. Tweet, Facebook, Blog, Tour, Skype, Pinterest, YouTube without ceasing.

The Internet and the ease of self-publishing have been both a curse and a blessing. For us the business of writing has become a grind. To be successful these days being a good writer is not enough. You must become a brand, a salesman, marketer, publicist, travel agent and a friend to all! Great books are written. Bestsellers are manufactured. It’s exhausting and at the moment, we don’t want to do it any more.

Over the years, since the days of Maxwell Perkins to now, the position and expectations of authors have evolved in ways that make it difficult to sustain what it means to write books for a living, including as Grant and DeBerry point out, the effort vs. compensation split.

The reasons for this shift are immense, and there have been many changes, large and small. Publishing has held onto legacy ideals in a new-media world. The art of selling books has become more science. The process to buy books transitioned online significantly. The idea of a book got remixed and electronic.

Then there’s the advent of the Internet and social media as connectors, finally giving authors what old-school marketing 101 calls DTC, direct-to-consumer access. Authors can connect with readers and have a direct impact on growing their readership — a notion that I champion as both author and reader, but which has proven to be both a blessing and curse to writers.

What about the non-interactive writer?

As things seem to become more social, more interactive, more participatory, and as the book publishing industry continues to scramble, searching for big hits and writers with bigger Klout, where do these changes and advances leave the author — a storyteller whose medium is by tradition non-interactive?

I cannot ignore the fact that many writers write books precisely because it is a form that doesn’t require a direct, active relationship between storyteller and reader. And that many writers, while once upon a time forced onto tours to read from their books and connect with readers (some love it, others loathe it), would much rather be at home writing, alone.

Things’ll be quiet here as I head into my writing hole. Please enjoy some of my “classics,” such as “I’m unhappy” & “RT if everything sucks”

This isn’t to say that authors don’t appreciate the passion of their readers and the opportunity to connect with them and be opened up to the spectrum of interpretations their writing presents. Or that all writers hate both the idea and reality of social media. (Have you ever read Colson Whitehead’s Twitter feed? It’s comedic, inside-his-head brilliance.) But writing books is a solitaire activity, one that can be easily corrupted by the pressure to be socially, technologically, and marketing savvy.

I’m torn. I’ve written several books and actually enjoy when the harder work begins — connecting those books with audiences, a task that I’ve had to assume on my own several times without significant support from my publishers. They just didn’t have a marketing budget for my work.

I still have a sweeping novel in me and look forward to holding its hardcover edition in my hands.

I’m a proponent of content and do believe that she is queen. I think that book publishing would be a lot better off if they too believed this.

I am excited by new technologies and innovative ways to tell stories. I like when stories leap off the page and onto the stage, screen, or my mobile phone.

I do think self-publishing can be empowering and democratizing. But when I think about some of my favorite novelists like Maryse Condé and Percival Everett, I shudder at the thought that the future of books could mean that talented writers can no longer afford to create beyond personal satisfaction.

I was one who used to preach that writers can learn from hustlers (at the time, usually defined as self-published writers who were better at marketing than writing) and that hustlers could learn from writers.

But hustling is its own art form — one that writers shouldn’t have to master in order to maintain their careers. A writer’s merit can’t be based on book sales and Facebook fans alone, but of the content of the characters found in their books.

While I still haven’t reconciled the balance between literature, business, and technological advances, it is more important than ever to simultaneously nurture ecosystems that support (not just appreciate) the literary arts, including taking into account the place of the print book as a form, and carving out the role that writers will play. Not just for the short term, but for the long term; the goal should be sustainability, even within periods of change, disruption, and delirium. And this decision shouldn’t be one based merely on book sales or author platform or gimmicky uses of technology.

I can’t say for certain what the future will look like for authors and, by extension, we readers, but we’re already seeing the loss of publishing’s middle class equivalent for authors. And well, we know how important the middle class is to the overall health of the economy. Writers deserve to tell stories for a living, as a career. Their needs must be in the forefront of any discussions and plans for the future of books, because without writers, there is no future.

Felicia Pride (@feliciapride) runs a team of story fanatics at Pride Collaborative and is the founder of The Create Daily, a daily resource for content creators. Her latest book, The Message was recently published by NBC.