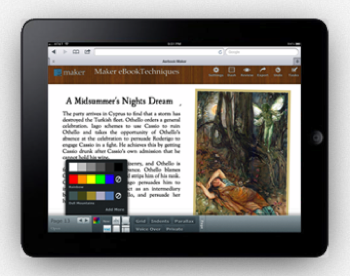 Although Aerbook on the iPad isn't officially supported until iOS 6, much of Maker works on the current iPad.

In the two years since I wrote a “A Self-Publisher’s Primer to Enhanced E-Books and Book Apps,” the development of user-friendly tools for authors to build rich-media books has boomed. Aerbook Maker and Kwik are two easy-to-use tools for authors of graphically rich enhanced e-books and apps. Mimetic Books is developing a tool for photographers and artists. The founders demonstrated these Corona-backed tools at the last meeting of the Palo Alto, Calif., Corona SDK Meetup Group titled “Bringing Stories to Life – eBook Development with Corona SDK.”

By now, you might be wondering, so what's an e-book and what's an app? Yes. The lines are blurring as content becomes portable among a variety of devices."

Before I go into more detail, it’s worth noting that these are really today’s only options for authors who are not programmers to easily create picture books and games. Aerbook Maker is a browser-based, drag-and-drop tool that works much like presentation applications like Keynote and PowerPoint. Kwik is a plugin that extends Photoshop CS5 to create pages of a book and even animations. Mimetic is at work on a plugin to Adobe InDesign.

Aerbook Maker was founded by Ron Martinez, an inventor with a long resume including the impressive title of vice president, Intellectual Property Innovation for Yahoo. He was there to demonstrate Aerbook Maker, talk about an upcoming Corona partnership, and give a sneak peak of projects in the pipeline.

If you’re writing an illustrated children’s’ book, a book of photography, art, or any other heavily graphic book, Aerbook Maker is for you. Martinez demonstrated how easy it is to drag and drop your files into a window in the web browser. You can drop in photos, audio, video, text boxes, scene animation, and interactivity, then rearrange them and apply styles, colors, and frames.

When you’re done, export your content to all the major e-book formats — to HTML5 for viewing on the web — and soon you’ll be able to print.

A built-in social media feature lets readers share any page of your book on Twitter, Facebook, and other networks. Like Kwik and many other tools for authors, Aerbook is evolving, and though books are not fully or officially supported until iOS 6, your book will probably already work on the iPad today.

The tool is cloud-based, so whether you’re just one author, or partnering with a designer or an entire team, the project is scalable and centrally available.

Aerbook Maker’s pricing structure is based on export credits at $29 each or $99 for five exports. This removes the Aerbook watermark and generates a final version to download directly to devices and place with e-book retailers. Their services include book and app distribution, and they will help you build your book for a reasonable fee.

Kwik is now in release 2.0, and founder Alex Souza showed off some impressive cross-platform e-books: “Fire Cupid” (featured in the Wall Street Journal, TIME, the Washington Times and others), Frederick “Spin” (which soared to the No. 2 e-book in the Dutch App Store), and “Sparky the Shark” (a beloved, award-winning children’s tale).

Kwik’s capabilities allow much more than creation of a simple color book. You can add audio, sound effects, buttons, timers, actions, drag and drop objects, linear animation, sprite sheets, movie clips, even path animation. Children’s book authors will be interested in the ability to sync audio to text so that the words are highlighted during playback. If you have items for sale in the iTunes App Store or Google Play, you can insert in-app purchases. Output your book to a universal app or iPad, iPhone, Kindle Fire, Nook Color or other Android device.

Kwik’s creator, Alex Souza, holds a master’s degree in Digital Design. In 1995, he was the first developer of a Shockwave game in his native Brazil, and in 2000 was a runner-up for the iBest Top 3 award, Brazil’s most important Internet award. Later he worked for IBM and Microsoft, creating applications and marketing Microsoft Office, Expression and Silverlight.

“There are too many updates to 2.0 to list, but physics is a major thing in the new version,” said Souza, “so the game-making capabilities have improved.” Kwik 2 costs $249.99 for a new license and $149.99 for an upgrade but at launch. Look for it in late September and get introductory pricing at $199.99 and $99.99. The free trial version will allow you to export up to four project pages. For ideas on what can be done with Kwik, take a look at their showcase.

Photojournalist David Gross of Mimetic Books presented some of his recent e-books including App of the Week winner “A Wild Flight of the Imagination: The Story of the Golden Gate Bridge,” a project he put together for its 75th anniversary. The free e-book weaves interactive photographs, artwork, letters, and newspaper clippings together with music, audio recordings and video.

Gross is a photographer who can code, and he invented his own way of importing his projects directly from Adobe InDesign (the tool that book designers use) and exporting the results to XML. Gross says that Mimetic Books plans to offer an InDesign plugin so that photographers and artists can create books to publish to the iPad and Nook. In the meantime, they do it for you. You choose from a number of designs, then send Mimetic the picture files. They can create a chapter from a properly captioned collection of photos in Lightroom or from captioned JPEG pictures. Or you can hire them to do full-service graphic design, photo-editing, copywriting, editing, animation, and custom programming.

Gross said that as well as using InDesign, “I am working on ways of using Google Apps, WordPress, and a custom browser-based editor to create books. As well, I am investigating whether Kwik can create plugins for books — Kwik excels in making complex animations, so why should I?”

Regarding pricing, Gross said that “I was offering book apps starting at $850, but I found that clients did not have enough experience in graphic design to deliver 100% complete materials. The extra work I have to do to prepare clients’ pictures, sound, and video, and the multiple changes clients make during the creation of the book, I have found a book project generally costs between $5,000 and $15,000. In addition, custom “interactive” pages also raise the price. But, I can produce a basic book app relatively cheaply using my system.”

Mimetic plans to have some products ready to go near the end of October.

By now, you might be wondering, so what’s an e-book and what’s an app? Yes. The lines are blurring as content becomes portable among a variety of devices.

“Book apps are different from e-books,” Gross explained. “E-books are data files which are displayed with readers. EPUB is one of the best-known data file formats designed for books of text (not fixed-format). A ‘book app’ is an app — a stand-alone program — that is a book. It’s a weird idea, actually, a temporary effect of the state of publishing software and the market. In a rational world, it wouldn’t exist, and I don’t expect such things to exist in few years. Instead, we will have a few e-book file formats that the different devices can read and display.”

Why the Corona SDK?

If you’re geeky enough to know that SDK stands for Software Development Kit, you might be interested in the reasons these e-book and app platform developers chose the Corona SDK to power Aerbook Maker and Kwik export-to-app capabilities. They pointed me to David Rangel, COO of Corona Labs, to provide details, and here’s what he told me.

“Corona integrates a number of advanced technologies such as OpenGL (widely adopted 2D and 3D graphics API), Box2D (a 2D physics engine for games), physics and more, to allow developers to create great mobile content,” Rangel said. “If e-book platforms wanted to replicate these features on their own, it would take them loads of development time and expertise. By building to Corona SDK, they save a great deal of time and get to take advantage of our platform’s offerings.”

Adding to the previous point, Rangel said, “Corona allows developers to build apps for both iOS and Android, from a single code base. If e-book platforms want to support both of these operating systems, they would need to spend a lot of time and energy building in that support. As we add in more features and platform support for Corona SDK, Kwik and Aerbook Maker automatically reap the benefits.”

Designers and illustrators are attracted to the SDK’s core engine because of its popularity in the mobile space. Kwik and Aerbook Maker provide the added advantage of allowing e-book authors to create impressive content without the need for code.

The folks at Corona Labs recorded the event.